It’s our 53rd Autostraddle Anonymous Sex Toy Review! Over the last few years, sex toy companies and stores have asked us to review their toys in exchange for, you know, their toys.

This week, one of our anonymous reviewers tried out the Magic Wand Rechargeable, sent by to us by Good Vibrations. 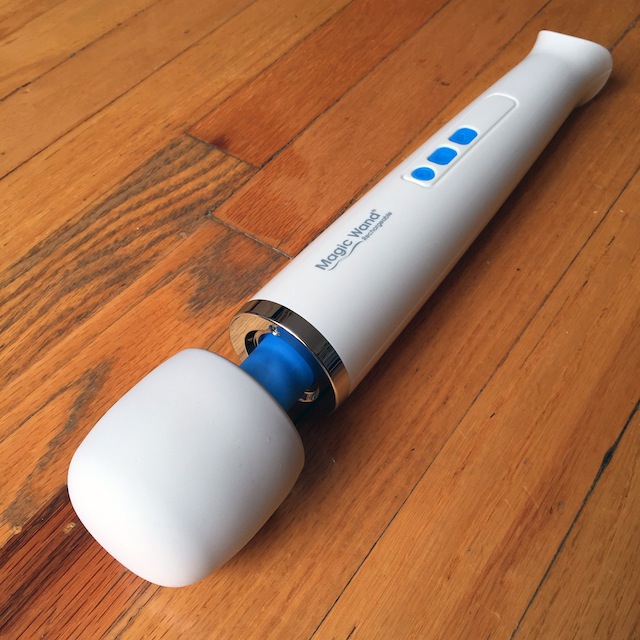 In terms of the massager to sex toy shift, the new model has four intensities instead of two — about 2,700, 3,800, 5,400 and 6,300 vibrations per minute, compared to 5,000 and 6,000 on the older toy — and four vibration patterns if you’re into that. (Is anyone out there into that? Can we turn the comments into a vibrator-settings-feelings open thread?) The control pad has lights to indicate what setting you’re on and when the battery is about to die. The buttons are just textured enough that you can play with them without looking, but if you have tiny hands this might be either an awkward or a two-handed endeavour. The toy is still pretty loud, but it’s quieter – Good Vibes gives it a 3 on a scale that goes up to 5 (the original was a 4). The head is softer, and is silicone instead of plastic. It’s still not splashproof or waterproof, but a girl can dream.

The look is a little different, too. When two Autostraddle reviewers tried it out in 2013, one noted, “This straight up looks like a prop from a 90s space movie that required a giant white ice cream cone that plugs into the wall.” The Magic Wand Rechargeable is half an inch longer, is a brighter white, and has more modern-looking controls and smoother lines. It’s just a bit prettier, but any time-travelling ’80s power feminists that might be around will definitely know what it is.

With rare exception (what’s up, wearing Vixskin in the right harness), I primarily enjoy thuddy vibrators that can pinpoint a few places just around my clit. I also like my vibrators portable, rechargeable and waterproof. I use other toys, because it’s always fun to do something different and because I don’t want to get too used to anything, but when I’m done with everything else and I still haven’t come, those types of toys are what I reach for.

The wand has a reputation for being magic at making people come in about 30 seconds though, so I was obviously game.

Then it did it again.

Using it with a partner was more complicated. So far, most of the ways I’ve used the wand with a partner involve watching a partner or a partner watching me while one of us uses the wand essentially alone. The head is big enough that if it’s near someone’s clit there isn’t a lot of room for anything else. It was fun to touch the head to the bases of various toys during penetration, and having a partner there to hold the wand gave me a little bit more access with my fingers, but it still often felt like it was in the way.

It also automatically shuts itself off after about 20 minutes to keep from overheating. You can turn it right back on immediately, but it seems like only a matter of time before this happens at a crucial moment and the wand accidentally lands on the floor across the room. (I played with it a few times, and even after running it for an hour straight it never seemed to get more than body-heat warm.)

I’m not as in love with the Magic Wand Rechargeable as I thought I’d be, but it’s definitely going to live in my nightstand and not in the closet. If you’ve never used a Magic Wand, this is a great way to go if you like all-over vibrations that are pretty buzzy and crazy powerful. And if you need to replace an original Magic Wand or have been curious about trying one, this is your toy.