Welcome to the millionth billionth installment of Make A Thing,  where we make handmade gifts for people. Or ourselves. Or our cats. Who doesn’t need something special in their life? Join in on the DIY fun and avoid the unnecessary consumerism of the world (and save a few dollars while you’re at it).

Garlands usually make me think of Christmas, when my mom would hang this really ugly (hi Mom! I love you!) garland along our entertainment center. Maybe yours did the same thing. Maybe yours still does.

The other association I have with garlands is in twee settings, but rest assured, garlands aren’t just for Pinterest weddings and Skunkboy birthday party backdrops. They’re freaking adorable, but they don’t have to make you look like a manic pixie dreamgirl. Unless that’s the look you’re going for, I guess?

I decided to make the following garland based off of these two inspiration pieces: 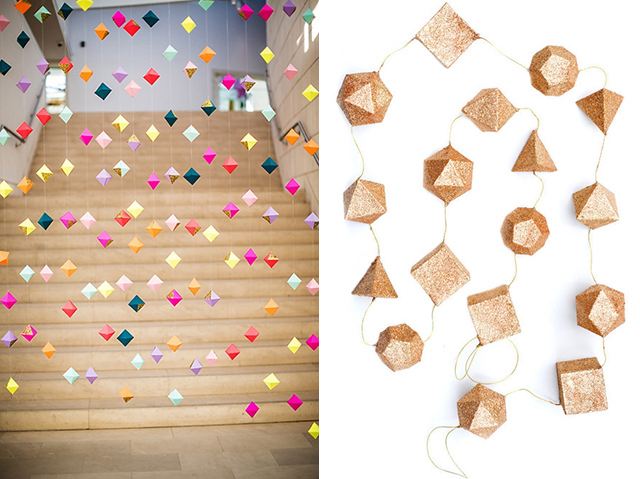 So, I used these ideas as inspiration and changed them into something of my own, using origami and glitter paint. 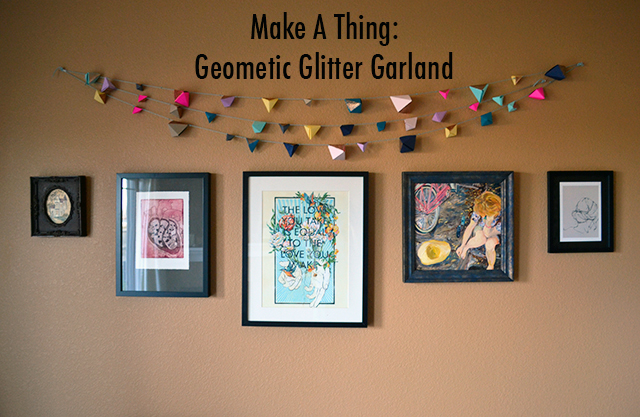 + Colorful cardstock paper (you can use regular paper if you’re not painting it)
+ Exacto knife
+ RULER (I finally bought a ruler, you guys!)
+ Glitter paint (I used the Martha Stewart brand in Sunstone)
+ Paintbrush
+ String, twine, yarn — whatever you choose to hang these with
+ Yarn needle (optional, but recommended)

Level of Difficulty: Easier than figuring out how to converse in a Google hangout with nine other people (hi, Sparkle Motion Rainbow Alliance!)

Pro Tip: I invited two of my best friends over, and along with my girlfriend, we made a crafting night out of making these in return for giving them alcohol. I strongly recommend you do the same. Call it team-building or something equally impressive, and then apologize to them a lot during the whole thing for giving them carpal tunnel syndrome. 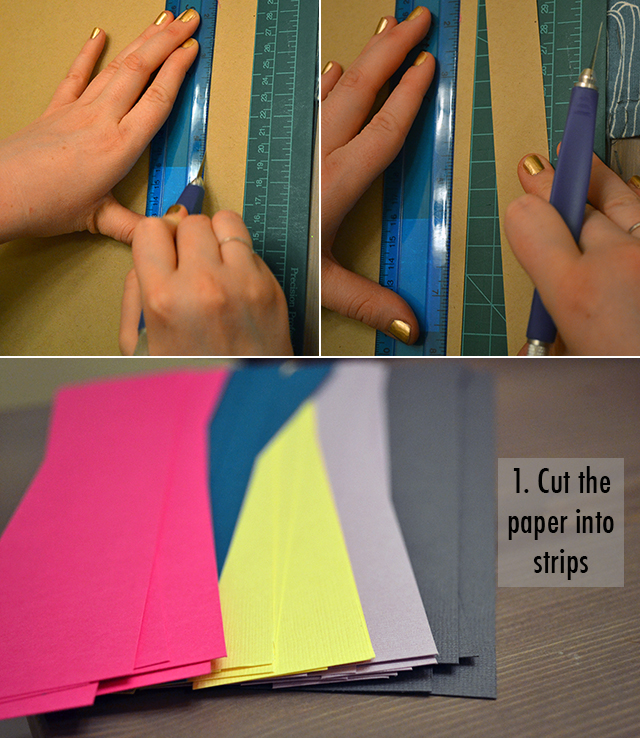 This part takes fo-reh-ver. Put on some Game of Thrones and get into a zone, because you’re going to be there for awhile. I cut mine into various different sizes, but found the ones over 1″ to be the easiest to fold, up to about 4″, which were impossible to fold. So stay in the 1.5″-3.5″ range and you’ll be happy. 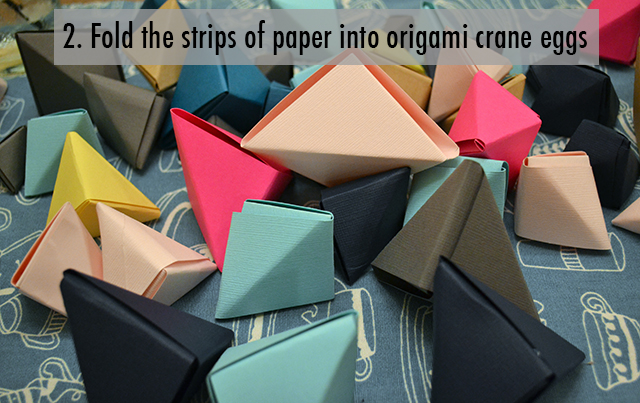 Rather than attempt to show you how to fold these, I’m just going to leave this right here:

They’re also called Love Knots, Google just told me. They’re really easy and pretty quick to make. I like to make them bigger than the tiny ones they fold in that video just because it means less folding and I’m lazy. 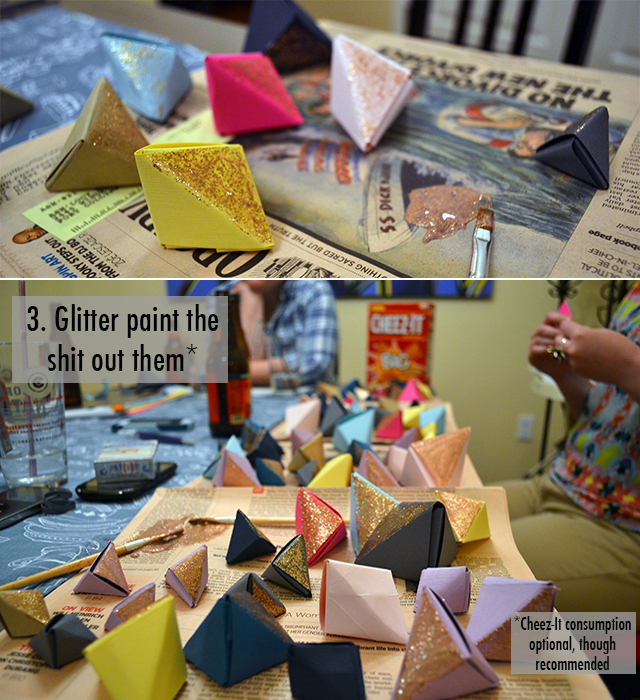 Now paint a side, any side. Or paint all the same side. Or paint it all. Or don’t paint it. Or just ditch the entire craft and eat Cheez-Its and drink Woodchuck. But if you do decide to paint, which I hope you do, use at least three coats for optimum prettiness. 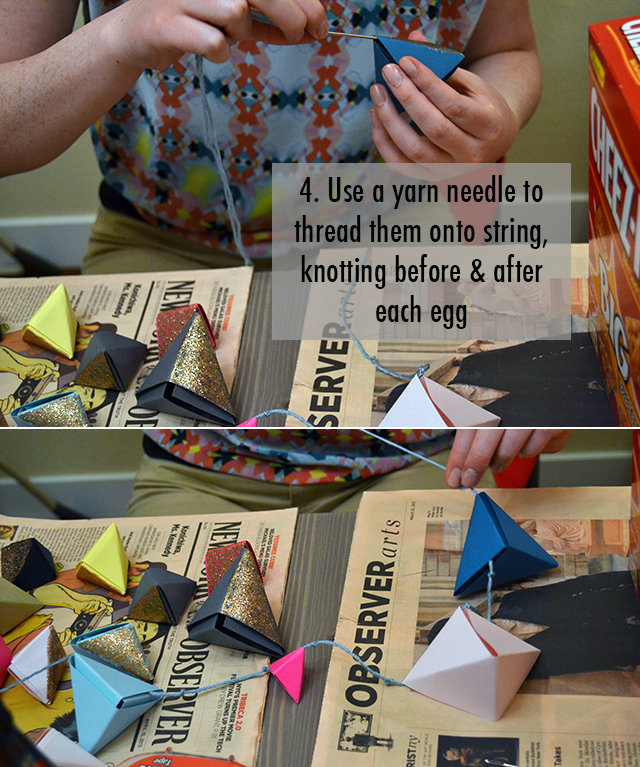 Let the paint dry, then string them on. Put a few knots in your yarn before and after just to secure them so they won’t all slide to one spot when you hang it up. I found that using a yarn needle (it’s big and dull, meant for weaving in ends/connecting granny squares on those afghans your Great Aunt always makes you) worked best for this task. I also just chose them at random and spaced them randomly on the string, but maybe you’re a particular kind of garland crafter. 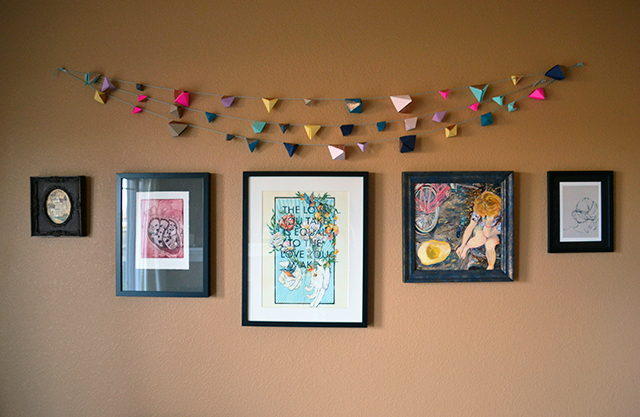 We made three strands to hang together over the gallery wall in the living room. I love our prints and paintings so much (why yes, that is a portrait of me after just having fallen off my bike) and the colors from the garlands compliment the colors in the pictures without being too distracting. 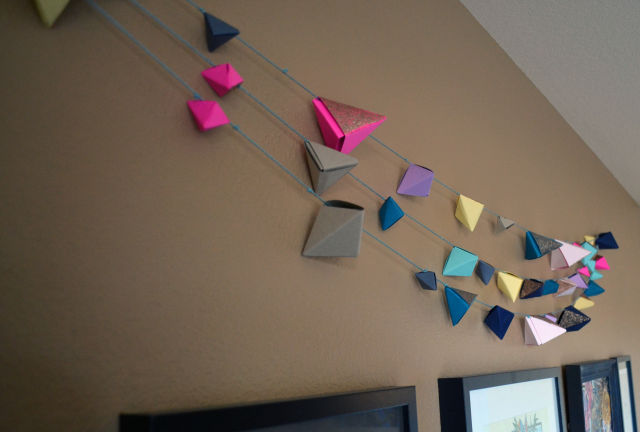 Now I have a ton of extra little egg things. I think I’m going to go garland the entire house.