Whether you fell for Anna Kendrick and her undeniable chemistry with a blue-eyed beauty in Camp, Pitch Perfect, or A Simple Favor, it’s hard to deny her quirky charm. Her characters dart back and forth between an awkward mess and a glamorous babe with surprising grace, and whether she’s acting or singing or writing, it’s amazing to realize how much big talent is packed into such a tiny frame.

So that’s why I pressed play on HBO Max’s Love Life, despite it being pretty far outside my go-to genres. The title alone would have been enough to make me ignore it forever. Not that I don’t care about romantic pairings full stop, but I tend to care more about them if they’re nestled in a fast-acting sci-fi plot or a dramatic murder mystery. A show purely about romance? I assumed I would have it on in the background while I worked to enjoy Anna Kendrick’s presence. I didn’t think it could possibly hold my attention. But I was wrong.

Love Life has a strong start as far as queer touches because while the voiceover talks about love and relationships and sets the scene for Anna Kendrick’s character, Darby, there are montages of relationships that include all types of couples, including queer pairings. Also, it’s established very early on that one of Darby’s roommates, Mallory, is a lesbian. 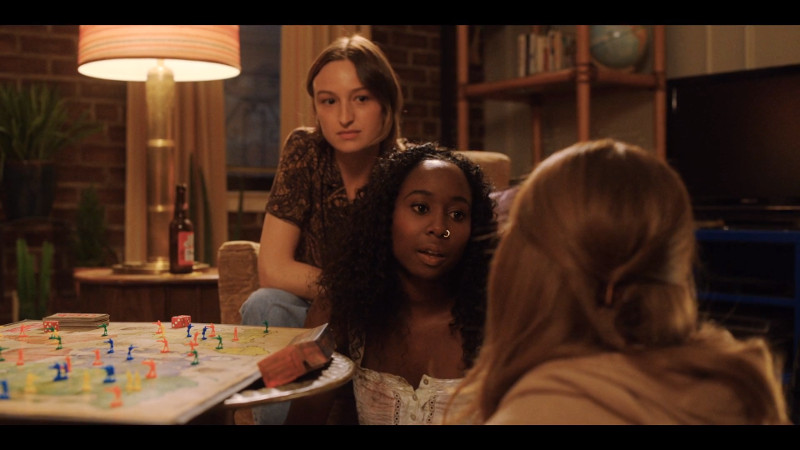 Mallory is the girl sitting on the floor. The girl in the chair is a mystery girlfriend.

And though Mallory is a secondary character on a good day, her presence and her gayness is persistent throughout, and later I’ll tell you about the gayest episode. But as we go through Darby’s relationships over the years, we get glimpses of Mallory’s girlfriends, too.

This is neither here nor there, but one of the things that kept me nestled deep in this show and never pulled me out is that it was set in New York but it was also very obviously created by people who love and have lived in New York. They go to Veselka and dive bars and Hamilton, moving out of their apartments crammed with roommates is a marker of adulthood, and it happens much later for people here than it does in more suburban parts of the country.

Oh and also, before you get any further, let me warn you so you don’t get let down as I did: The first few episodes are named after men Darby dated, but don’t get too excited when you see women’s names in later episodes. Those are of her mother, Claudia, and her other roommate/best friend, Sara, because as time goes on, Darby starts to realize that romantic love isn’t the only kind of love she should be focusing on.

And I think that’s why I ended up being so entranced by this show. Yes, it chronicles Darby’s love life throughout the years, but it’s never about the men she dates or marries or loves. It’s about Darby.

At one point, Darby visits a therapist, who points out that it seems like Darby is using romantic relationships as a marker of proof that she’s lovable, because for some reason, Darby doesn’t feel worthy of love.

Which is where the episode about her mother comes in. Darby and her mother get along fine on the surface, but Darby has never felt like she’s a priority for her mother. She never felt connected. She feels like her mother’s audience, like she has to keep a wall between them to protect herself from her mother’s criticism. That she can’t even fully trust moments of kindness because she’s afraid her mother will find a way to flip it on her or take it away. Her mother is confused by this, she’s tried to love her the best that she can, and this doesn’t soothe Darby at all. “You shouldn’t have to try, you’re my mom.” They have an open and raw conversation — in a mattress store of all places — about why their relationship is broken. And though Claudia will never be able to fix the mistakes she made in Darby’s childhood, and Darby will never have the mother she needed when she needed one the most, maybe they can still redefine their love for each other. Find a new way to fit into each other’s lives.

This realization about her relationship with her mother helps Darby answer the question her therapist once asked her. Why doesn’t she feel worthy of love? Because she spent her childhood feeling like she had to earn a love that should have been unconditional.

And, as the voiceover says, “The way a daughter experiences the love of her mother forever colors the lens through which she gives and receives love of all kinds.”

As the seasons go on and Darby finds herself not needing to be defined by her relationships, focusing instead on her career and her own happiness, her roommate Sara, who has been in a relationship for years and years, ends up single. As Darby is putting her life together, Sara’s is falling apart. And this all comes to a head during the gayest episode of the season, which is Mallory’s bachelorette party weekend.

Mallory is marrying Tarin, and the gals all wear “2 brides are better than 1” shirts and head up to a cabin in the woods for a very gay weekend. 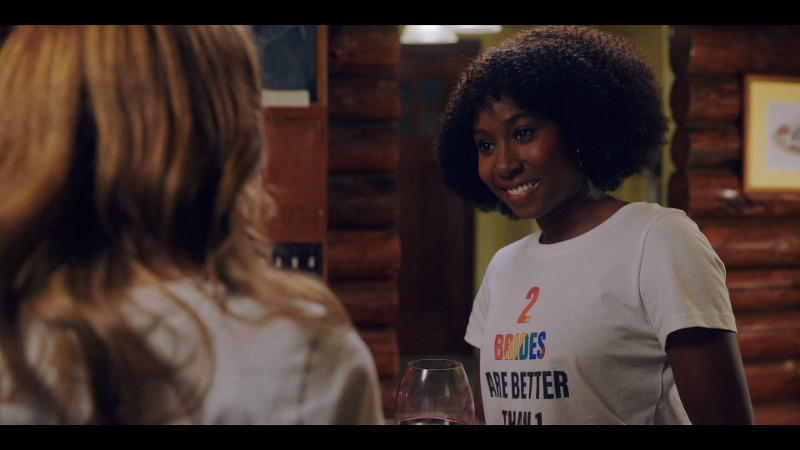 I’m usually morally opposed to matching bridesmaids t-shirts but I’m obsessed with these.

They hit all the staples of a gay getaway: vegetarian options for dinner, a butch stoking the fire, someone reading tarot, etc. One girl, Ramona, takes an interest in Sara, who Darby insists is straight, but Mallory and Tarin says that straight girls are Ramona’s type, which is relatable, but also Ramona, bb, save yourself.

One night during this trip, the gals go to a strip club, where Darby is enjoying herself more than she expected to, which brings us to my favorite exchange in the entire series:

Mallory: Come to the light side!
Darby: Are straight people the dark side??
Mallory: Obviously. 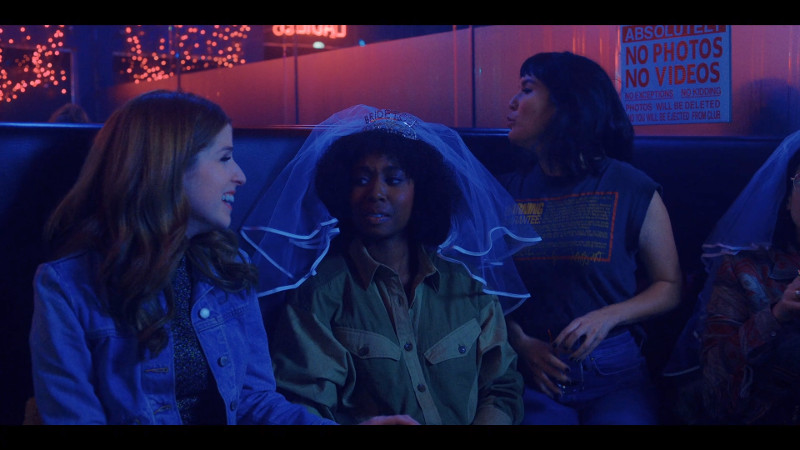 I’m stealing this, I hope they don’t mind.

And even though Mallory and her relationships aren’t the point by a long shot, we do see her go through girlfriends before she meets Tarin, and her and Tarin continue to show up in the following episodes. And honestly it’s kind of nice to have a show with a queer relationship that isn’t an afterthought but also wasn’t the point? Like obviously in a perfect world a second season of Love Life would follow the same general pattern of following a woman through a lifetime of relationships but instead it’s a queer woman, but considering Darby’s relationships are the only ones that matter here, it’s nice that Mallory’s relationships were never dramatic or tragic or awful. They’re matter-of-fact, there or not there, until Tarin, then they’re just a happy couple that Darby knows. A footnote in her story, but a happy one.

As representation on TV grows, I’m enjoying finding my stories tucked in the background of shows, too. It doesn’t have to be a big splash to be good representation, because the truth is we’re everywhere, doing everything, including being boring. (Not that Mallory’s boring. She’s actually a great anchor for Sara and Darby in the early episodes, the only voice of reason at times. But you know what I mean.)

I won’t give away too much of the ending, but I will say that in the end, when Darby does find her soulmate, “The One” — aka the person who’ll end up making her happiest for the majority of her life, her last love — the episode isn’t about him, or even their relationship. For the first time since the season’s start, the episode is about her. When it comes down to it, true love isn’t wild and passionate or flashy and obvious. It’s quiet and still, and it settles down around her once she stops running around trying to prove she’s worthy of love. It can only reach her heart when she opens herself up to the possibility, when she stops analyzing motives. When she’s ready to accept that she deserves to be loved.

I don’t know exactly what it is about this show that struck me in a way a decade of dating, advice from friends, movies, shows, and books never have. Maybe it’s because I saw a bit of myself in Darby, the transplant New Yorker with mommy issues. Maybe it’s because it didn’t really try to offer a one size fits all solution. Maybe because it acknowledges other types of love in a way not all shows get right; that the love (or lack thereof) of your given family profoundly affects you in non-obvious ways, that the love of your chosen family is just as important if not more so. Maybe it’s just brilliant storytelling, maybe I’ve been in quarantine too long. I don’t know. All I know is that I kept love stories at arm’s length before, boldly declaring that love is a lie and scoffing at my more romantic friends. And now I’m starting to think that maybe love isn’t a lie. Maybe it’s just hard. And maybe it’s worth fighting for.