This week, one of our anonymous reviewers tried out the Mustang Royale from Vixen, sent to us by Babeland.

Care instructions: Submerge in fully boiling water for three minutes, place in the top rack of dishwasher if your dishwasher has a sterilize setting or use antibacterial soap. Use only with water-based lube. Your toy will pick up any hair or lint it’s in contact with, so a quick rinse before use is recommended. 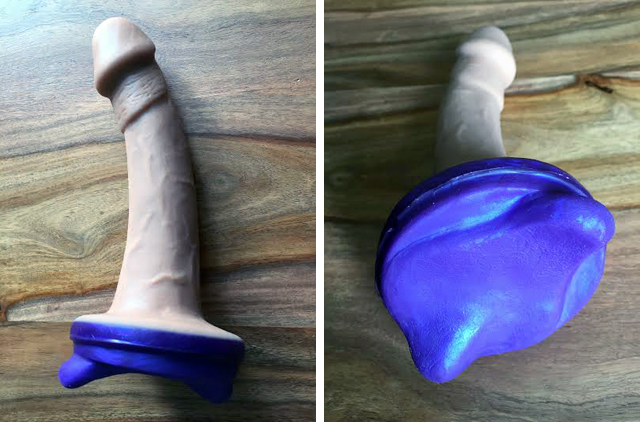 The Mustang Royale is a new version of Vixen Creations’s classic Mustang with a new, sculpted base designed to stimulate the wearer.

Out of all of the cocks I’ve strapped on with so far, the Royale feels the most like it’s a part of me when I wear it — a sensation entirely due to the base. Instead of a flat base like the regular Mustang, the Royale has an indigo-colored saddle base designed to fit a vulva with little squishy nubs that stimulate the wearer. The saddle base is made entirely of the squishier outer core silicone, so it doesn’t have the same stabby issues as the Fusion.

After some positioning so the base touched flush, the Royale base fit me really well. Instead of a flat surface there was something to grind up against and that was really neat. I wish the bottom nub was bigger, like two to three times the size even, so that I could feel that part more. But I bet it would probably fit fewer folks if that was the case. I can imagine designing a one-size-fits-most-vulvas base was probably pretty difficult. Even then, the only problem I foresee is not everyone’s vulvas are shaped the same.

I orgasmed with both versions, but I don’t have to work to orgasm with the Royale. In fact, a couple times I had to pause or stop to try not to come, which was a first for me strapping on. That made me feel a bit like an over-excited teenage boy which was both fun and surprising.

Like the original, the Mustang Royale is very realistic, and currently comes in the three skin tones. I know a lot of my friends don’t like realistic-shaped or skin-tone dildos, but I prefer them. The body is made of VixSkin, a dual-density premium silicone that does not break down or degrade, and that magically retains heat better than other silicone cocks. The inner core is harder, and the outer core is squishy and a bit sticky. (Really sticky. VixSkin picks up dust and hair and all sorts of stuff, you can’t use it without a quick rinse, no matter how you store it, which can really be a dampener to the mood.) Once you add a bit of wetness, that stickiness turns into a very pleasurable slight grippiness. The toy isn’t super rigid and sometimes falls out, but the flipside of that is you don’t need to rotate it when doing non-face-to-face positions as the curve gives.

I used the Royale with both the SpareParts Joque harness and the RodeoH briefs, and I preferred the lower positioning of the SpareParts as it lines up better with my body. The Royale fit fine in the SpareParts harness, and the base fit inside the fabric pocket just like the regular base.

My favorite part of the Royale is that when I’m just strapped on and not actively having sex I can feel it touching me, meaning if I touch the cock and move it around, I can feel it directly on my bits. This made it more interesting for me to simply wear while not having sex, and a lot more intense when someone gave me a blow job when I was strapped on.

My activity partners had the following feedback:

“I mean from a purely physical standpoint, it feels like a regular mustang. But the ways in which it felt different to you affected my experience on the receiving end. Like, I could feel that your response was… more? And your heightened enjoyment added a layer of fun for me.”

“I like how it felt like it was filling me up and almost taking my shape instead of just a solid shaped object inside of me that I had to form around. It felt much more realistic or natural because of that. I also really liked the tug/grip as is was pulled outwards.”

“It was the first time to be on the receiving end of a mustang, I had only strapped mine before. So that was super exciting, it was as good as I had heard. It differentiated from other cocks in that I could tell how into it you were. How you fucked me was another level, like it felt so good that you couldn’t stop from coming. Which is super super hot.

I’ve strapped on with my Mustang for a couple years now. It’s always hot, but there’s not a ton of sensation on my end. That was not the case at all with the Royale. With me on top, or with the cock being played with lightly there was always a really excellent feeling of being teased. And with someone on top or positions with a lot of friction I could feel the cock to the point of distraction, getting off on how the Royale was hitting me.”

It works as advertised (for me anyway!). This may or may not be the magical cock for you if you normally don’t orgasm from strapping on (disclaimer: I can often orgasm with regular cocks). The base fit me, but it may not fit you, and I still wish it were more dramatically shaped. I do think it’s awesome, but I think it could be even more so.

My experience has been great, and the Mustang Royale is now the favorite in my collection. I’d love to hear other people’s experience with it too. Have you tried it? What did you think?