It’s our 40th Autostraddle Anonymous Sex Toy Review! Over the last few years, sex toy companies and stores have propositioned us, wondering if we’d like to review their toys in exchange for, you know, their toys.

This week, one of our anonymous reviewers tried out the Lelo Sensua Suede Whip available at Babeland. 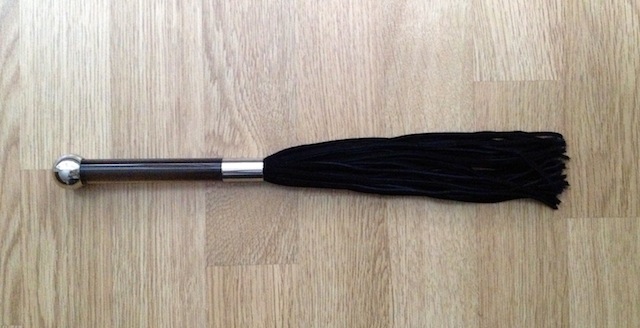 Here are the things that are good about this flogger: it’s sort of pretty, if you have a form over function aesthetic sensibility, and get the black one (the red and purple versions look really tacky).

Here are the things that are not good about this flogger: everything to do with actually using it as a flogger.

The first thing I noticed about the Lelo Whip is that it’s tiny. It’s about 14 inches long, with 40 falls that are about 8.5 inches and a handle that’s about 5.5 inches. From looking at the pictures online, I thought it’d be much bigger, but that’s on me.

For comparison, an ideal flogger should stretch from your armpit to your middle finger. (The falls and handle can be basically any length you want as long as that’s the length they add up to.) The Lelo is not trying to be that kind of flogger — i.e., an actual flogger — but as its marketing materials describe it as “for novice and experienced couples alike,” I don’t have any qualms about comparing it to the real thing.

Unless you’re really lucky, you’re probably not going to be able to walk into a store and find floggers that are exactly the right length for you no matter how serious they are. With the Lelo Whip, though, the falls are really short — too short. They’re short enough that when I tried to flog someone, I was conscious of hitting her with the handle by accident. She reports the same feeling. (This would not be the fun kind of pain.)

The length means you’re manipulating the toy more with your wrist than with your arm. At 4 ounces (about a quarter pound), the Lelo Whip doesn’t feel like air, but it isn’t heavy by any means — and I still noticed my wrist getting tired after only a few swings. The reason for this is that the balance point is in exactly the wrong spot. 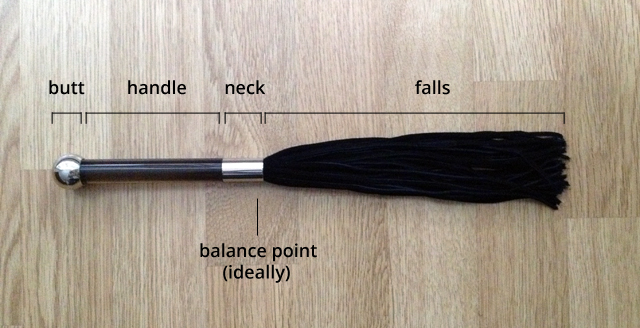 The Lelo Whip’s balance point: mysteriously in the middle of the handle.

Floggers — all floggers — should have the balance point right at the neck of the handle, where the handle meets the falls. The Lelo Sensua Suede Whip’s balance point is in the exact middle of the handle. This poor balance meant that, even though the flogger is tiny and fairly light, and even though we were using it for a fairly short session instead of something at all intense, my wrist started to hurt.

Balance and length aside, the Lelo Whip’s weight also left a lot to be desired. It was just too light. Most floggers are designed to be thuddy, even when they’re also stingy — that’s kind of the point. Perhaps the Lelo Whip would be thuddy if you were flogging an actual literal delicate flower, but otherwise it’s too light and too short to have any kind of force or momentum behind it. (It’s also too soft, so where a paddle of equal length could feel thuddy, this doesn’t.) What it can be, when it feels like anything, is a little stingy. Not the good, mark-leaving kind of stingy, but something a little like a riding crop at 20% power.

The one advantage to how light it is was that it made me more daring with targets. While with something like an elk leather flogger, I tend to stick to really obvious safe targets (ass and thighs), the Lelo Whip feels like you could pretty much hit someone or be hit anywhere. (If you try it for some reason, you should still avoid the head, spine, lower back and delicate bones.) If you’ve been hesitant to flog someone’s breasts or genitalia, the Lelo Whip is a fun and easy way to start. Even there, though, the short length of the falls means that sometimes the ends wrap around and end up in unintended places. (A problem, since suede is impossible to sterilize.)

Given that the slogan of the Lelo Sensua Suede Whip is “the tasseled suede whip for assertive moments,” it seems only right to declare that this toy is in no way appropriate for “assertive moments” of any kind. However, in the interest of science, I also tried using it as a non-pain sensation toy, and as a leathery feather duster the Lelo Whip is top notch. You want to drag something over someone’s body at close range and for not too long a time? This is the toy for you. I think it’s meant to be used the way that someone who isn’t into knife play might sometimes drag something pointy and cold across someone’s skin — for a moment, it feels like the threat is there, but you both know it’s really not.

The target audience might be unenthusiastic or hyper-cautious beginners — people who want to experiment with the idea of maybe flogging or being flogged, but who aren’t even really serious about trying out the sensation yet. This is a shame. If this had been the first thing I’d ever hit someone with or been hit with, I would not be the kinky diy-flogger-making, bruise-coveting dungeon-visiting person I am today, and my sex life would be horribly lacking. (Not all vanilla sex lives are unsatisfying, but mine was.)

On the other hand, because you need to have pretty tight wrist control to make the falls hit where you aim, it feels like it might be more advanced. It reminds me a lot of using a short crop, except with a crop you expect there to be technique, and with this thing — “for novice and experienced couples alike” — that’s not the case.

That the Lelo Sensua Suede Whip is called a “whip” is an affront to whips everywhere. I have no idea who this toy is for, but it is probably not for you. For an introductory sensation toy, try the vegan Mini Riding Crop. For something kinky that looks pretty, try the Candy Apple Kit (though that slapper is deceptively stingy). And for a still short and light, but better, introductory flogger that’s only $4 more than the Lelo, try the Heart 2 Heart whip.