It’s Friday which means it’s time for the Friday Open Thread! The article that is just like your journal but also someone else’s journal and also it talks back to you! Or rather, it talks at you first about itself and whatever exactly happens in a journal’s life and then you can talk back to it and it’s sort of a conversation but also sort of a letter exchange. To clarify, I’m the journal in this conversation.

Everyone else started their open thread with a picture of themselves so here’s a super cute picture of me and my super cute girlfriend sharing  a milkshake. 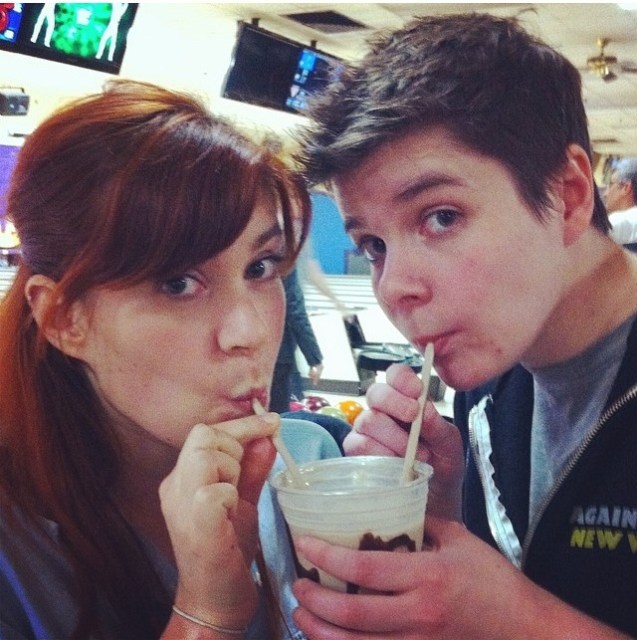 My week was wonderful and amazing! I don’t know about you guys, but this has been one of the best weeks ever! I wouldn’t say I’m someone who has a lot of “good weeks,” and I’m rarely blindly positive, but this week just rocked.

Wait. I lied. Actually, first it was really terrible! It was kind of bad and I thought I was going to die. To start off the week I convinced myself that I had failed my medical boards (the scores of which I knew were to be released this week). Then I found out that my landlord was kicking us out of my apartment at the end of this month and I was going to have to move! Is there anything in the world more terrible than moving? No. No there isn’t. Also I woke up one morning with a bug on my arm and thought that there were bedbugs in my girlfriend’s apartment and was terrified. Oh and Tuesday I banged my foot against the doorway and broke all five of my toe nails and spilled couscous.

But then everything got a hundred million times better!!

First I signed a lease on a beautiful big new apartment! It’s bigger and better than my current apartment in a cuter neighborhood and painted yellow! I still have to move but at least now I can stop trying to squeeze my mountains of shoes into my tiny bedroom. Then I went bowling with my adorable girlfriend and decided that she was the cutest girl ever. Most importantly, I found out that I passed part one of my medical boards!

With all that in mind I want to hear about your weeks! Was it awesome? Was it not awesome? Was it awesome some of the time and less-than-awesome other times? What’s the most awesome thing that happened? Do you want to just celebrate me and my new apartment and my passing score and my bowling girlfriend?! That’s okay with me too! Pour all your feelings right here because Friday Open Thread is really about you and whatever the hell you wanna feel!

If you need to upload the photo you love from your computer, try using imgur. You cannot use the imgur link, though. You still have to right click and copy the image URL when you’re on the image page. The link you use should end in .jpg or .gif or .png or something like that.

How To Post a Video In The Comments, Too:

1. Find a video on YouTube or Vimeo or WHATEVER. Click “embed.” Copy that code — NOT JUST THE URL! — but first make sure it’s for 640px wide or less. If your player is too large, it will not display properly.