In her latest social media partnership, Miley Cyrus and the Happy Hippie Foundation have teamed up with Instagram to create #Instapride. Throughout the next two weeks, the campaign will share the photos and stories of “transgender and gender expansive people from around the country.” 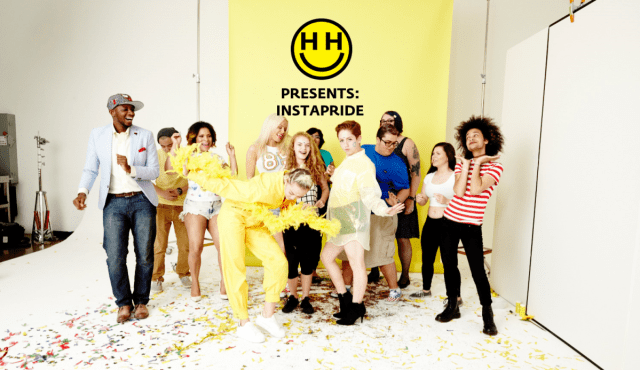 via The Happy Hippie Foundation

Miley recently came out as various non-specifically-labeled types of queer with regard to her gender and sexuality and launched Happy Hippie, a foundation dedicated to serving homeless and LGBT youth. #Instapride has already garnered a huge response on Instagram — and has already started telling stories, beginning with trans man Leo Sheng. It is pretty amazing to consider that Miley is deliberately putting trans stories and nonbinary stories in front of more than 22 million Instagram followers, not to mention all the other ways she has to reach wide audiences.

Leo wrote on Instagram that sharing his story of transition has been important to him, and he was excited to do so more broadly through #Instapride.

It was run and shot by Miley herself, and showcased stories of trans and gender-fluid Instagrammers from around the country. I can’t remember the last time I’ve been in a room with so much love, pride, and respect for everyone’s journeys. It was such a privilege to be included and I’m so humbled to be a part of something so special and beautiful. I hope that I can inspire those who have the ability to share their own stories to find their own voices.

Miley is an imperfect celebrity advocate with a splotchy history of racism and cultural appropriation that she has never apologized for. However, this campaign, at least in its first hours, seems seriously groundbreaking in scope and wonderfully positive in its approach.

And, in an exclusive with Time (which discredits her membership in the community by calling her an ally and deadnames Caitlyn Jenner and is generally Time-ish, but I digress) it seems like Miley is learning to acknowledge and leverage her privilege.

“In places like Indianapolis, you can tell someone that if they’re trans or gay they can’t use your public bathroom,” Cyrus says, referencing the “religious freedom” law passed earlier this year that has since been rolled back. “No matter what I’d do, I’d probably be allowed to go in there. Because they’re starfuckers. And these people are real people. I don’t want to be anywhere they can’t be.”

Getting trans and non-binary people’s stories out in the world and in front of a huge audience fits into Happy Hippie’s goal of amplifying youth voices to help eliminate prejudice and keep people alive and happy. And the specific focus on the T in LGBT is rare and necessary in a social campaign like this. Here’s hoping these stories reach the people who need to hear them!