Here are the stories we missed this week.

The Ali Forney Center in New York City is the nation’s largest organization working on behalf of runaway and homeless lesbian, gay, bisexual, and transgender (LGBT) youth, and they are calling on Christians to own up to the hostile and abuse-prone views of anti-LGBT church communities and how they impact queer youngsters.

In a series of videos, clients describe the suffering they went through in Christian homes, including the painful rejections and homophobic rage of their families during their coming outs. In an essay, Ali Forney Center Director Carl Siciliano writes: “Decent people do not stand by in silence when children are being abused. We need to recognize that the condemnation of LGBT people in churches leads to the abuse and rejection of LGBT children in far too many Christian homes. As Christians commanded to love one another, we need to demand that this climate of rejection stops.”

Meanwhile, NY Cardinal Timothy Dolan is urging the church to be more welcoming to homos at-large:

On Easter Sunday, weeks after he helped elect a new pope for a church struggling with declining numbers and controversy over social issues, Cardinal Timothy M. Dolan said that the Roman Catholic Church could be more welcoming of gay men and lesbians despite opposing same-sex marriage.

In recorded interviews with George Stephanopoulos on the ABC News program “This Week” and Bob Schieffer on “Face the Nation” on CBS, Cardinal Dolan, the archbishop of New York and one of the leading voices of the Catholic Church in the United States, did not suggest any changes in church teaching. He defined marriage as “one man, one woman, forever, to bring about new life,” but, he told Mr. Stephanopoulos, “we’ve got to do better to see that our defense of marriage is not reduced to an attack on gay people.”

“And I admit, we haven’t been too good at that,” the cardinal continued. “We try our darnedest to make sure we’re not an anti-anybody.” 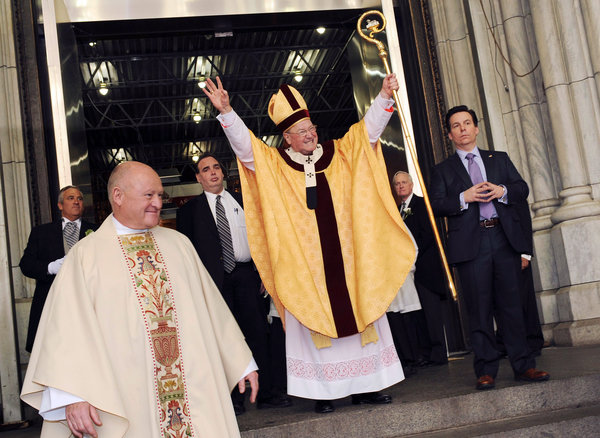 In related reading, “Honey, We’re Praying for You” at Slate:

“Honey, we’re praying for you.”

This is how my mother ends every email she sends me. Typed in italics and peppered with smiling emoticons, Mom’s electronic missives are as precious as she is — as earnest as the Empty Tomb Cake she bakes each spring on Good Friday. An edible replica of the cave where Jesus was buried after dying on the cross for our sins, the Empty Tomb Cake is the standard passion week centerpiece in my childhood home. It is frosted in gray, surrounded by a field of green coconut grass, and finished off with a Hostess Ding-Dong as the stone that was rolled away. On Saturday night, after everyone goes to bed, Mom steals into the kitchen under cover of night and rolls the Hostess Ding-Dong away from the door of the Empty Tomb Cake, then retouches the frosting. On Easter morning Jesus has risen — right there in the middle of the kitchen table.

+ The Peculiar Kind wants another go:

We’re excited to announce our mini spin-off series, “Nomadic”. The show will take our viewers around the country to spotlight hotspots and happenings for queer people of color through a “What to Do” tour of various cities. “Nomadic” will also feature queer owned businesses and organizations doing great things for their community.

+ Out & Around, in which two queermos seek out history:

When Jenni & Lisa first fell in love, they vowed to follow a life of adventure. But this business manager and social worker had no idea that their promise would lead them to leave their 9-5 jobs, pick up a video camera, and travel through Asia, Africa and South America in search of the people who are leading the movement for gay, lesbian, bisexual and transgender equality. Combining intimate verite and video-journal footage of this couple’s yearlong journey with their interviews of LGBT leaders across the developing world, Out & Around documents the momentous changes occurring in the status of queer people around the world today. The film follows Jenni and Lisa as they prepare for their trip, hunt for the LGBT leaders, get engaged on a beach in the Philippines, travel through 15 countries of adventure, struggle with their identities and their relationship, and meet extraordinary people who are changing the world.

All Around the World…

Homophobia is in the water or something. In Iowa, state legislators want to defund a community college for hosting an LGBT conference. In Russia, Putin is attempting to shut down foreign LGBT adoptions of his country’s orphans before July 1 (so grab your blonde babies now!). In Malaysia, an anti-gay musical is on tour at schools and universities. At NBC, Jenna Wolfe got demoted – potentially because she’s gay. In the Senate, eight democrats still don’t support marriage equality. How many federal employees are queer, anyway?

Albania is the most homophobic place in Europe.

On the Internet, Republican National Commiteeman Dave Agema is being a total jerk – and won’t step down now that he’s been repudiated for it.

In [a Facebook] post, [Agema] encouraged people to read a hateful propaganda piece titled “Everyone Should Know These Statistics on Homosexuals” which includes such abhorrent claims as gays are responsible for “half the murders in large cities.”

Agema was interviewed by Michigcan’s WWMT3 and, while he slightly backs away from some parts of the article, he says he very much still believes most of it.

“They quoted as what somebody else said and attributed it to me; I didn’t say that,” Agema said. “So, do I agree with everything that that guy and the way he said it in the article, no. But he gives a lot of statistics on the results of the health and mental and physical health of the lifestyle and what it causes.”

Let Margaret Cho Take Her Clothes Off Or Else

Let Margaret Cho take her clothes off or else. 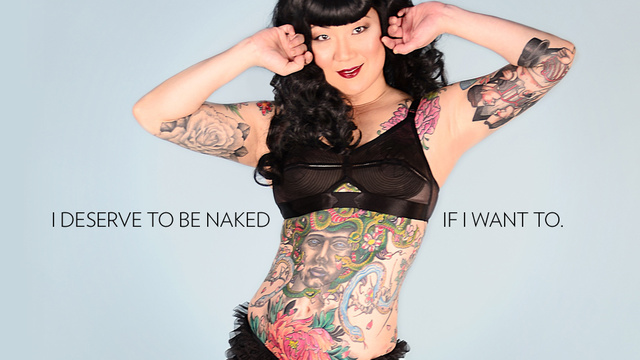 I walked around from pool to pool, and I kept getting dirty looks from the ladies there. They would talk about me very negatively in Korean, and I just spoke loudly in Korean –- not back at them, but nicely –- saying “ahhh Jotah!” which means “this feels good” –- really at no one -– but just to show that I could understand what they were saying and they weren’t getting away with anything.

I walked into the huge sauna, naked, and sat there watching golf on tv –- they have a fucking tv in the sauna. How sweet is that? A few seconds later, a fully clothed young woman, I am guessing the manager of Aroma Spa, came into the sauna, looked around and walked back out. Then, I guess she mustered up the courage and came in again and asked me if I would come outside with her, as the sauna was too hot for her as she was fully dressed.

I walked out to next to the pools with her, and she sat me down on the wet bench and tried to tell me, very apologetically that I was making the women there upset with my heavily tattooed body. She was really sorry and embarrassed about it, and I felt bad, but I was actually enraged.

Medicare hasn’t decided yet if Gender Reassignment Surgery will be covered. Luckily, the Jim Collins Foundation wants to help anyway.

The Jim Collins Foundation is committed to empowering transgender and gender non-conforming people to speak for themselves, and to live beyond the pathology or diagnosis of Gender Identity Disorder (GID). However, today’s current healthcare and legal systems still require diagnosis of GID to allow many steps of transition, including surgeries. Many legal, educational, and healthcare activists (including members of the Jim Collins Foundation Board of Directors and Advisory Board) are working to bring our social systems up to speed with the needs of our community’s diverse members. Until these social systems change, the Jim Collins Foundation is required to support recipients in taking steps that will ensure their success in transitioning – emotionally, legally, and socially.

(And in Calgary and Edmonton, Canada, transgender awareness is finally starting to happen.)

12pm: We’ll hold a rally with a mix of speakers and performers in Washington Square Park on the stage, located east of the fountain.

2pm, we’ll leave the rally to chalk the streets of New York with positive messages against street harassment. Chalk is provided!

5pm: After your hard work has paid off, come to The Half Pint on the corner of Thompson and West 3rd to refuel.

+ For the Brits, via our very own Effie:

L Fest, the leading lesbian festival in the UK has announced its line-up with the L Word’s Betty headlining.

If you haven’t got your ticket yet, or were umming and ahhing about whether to go this year, the L Fest line-up should persuade you to whip out the credit card, cough up the cash or sell your possessions. Taking place over 69 hours (of course), in the brand new location of Uttoxeter Race Course in Staffordshire, L Fest will be showcasing the best of the new and emerging talent in music, comedy, arts and film. It covers all aspects of the lesbian spectrum from firm favourites like BETTY, to new and emerging British talent like Heads Hearts and Red N Pink. 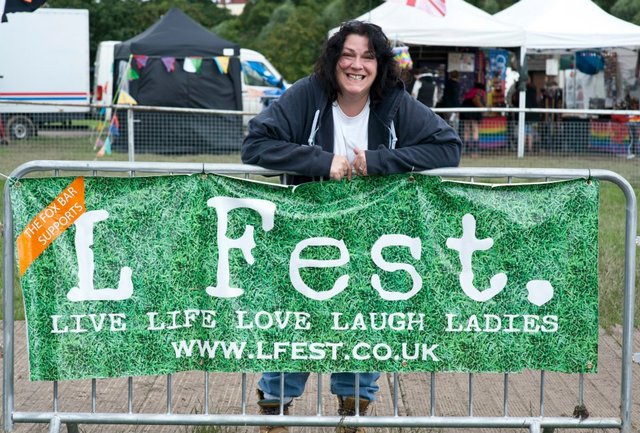 With all that and more there’s also some other lovely bits to make the weekend more enjoyable such as the spa so you can pamper yourself after a hard day of watching bands. There are workshops galore, activities, a cinema to showcase some of the best films and of course The L Project will be performing their charity single. Tickets are priced at £99 for the whole weekend.