Hello Scholars! All I had for dinner yesterday was fruit. Well, it was a strawberry poptart if I’m being honest with myself. The resulting starvation is probably why I’m probs having a quesadilla for breakfast. That and the fact that I’ve just discovered the wonder of the George Foreman grilled quesadilla! So easy and delicious. That’s what she said.

Speaking of poptarts… last week I had an Oreo poptart and, while it was very much an Oreo poptart, I will not be doing that to myself again anytime soon (because they ran out at Safeway). Here’s some news!

+ The Star Tribune in Minnesota ran a full-page transphobic and inaccurate ad and is catching heck for it, as they should. This ad totally misrepresents the issue in question in order to stir up fear and hatred of trans women. 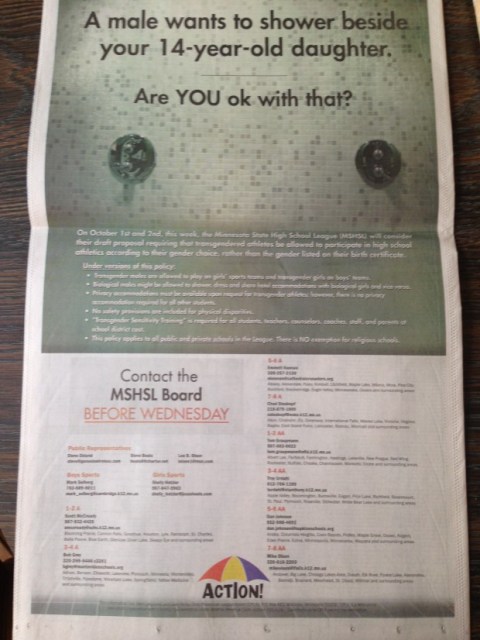 I mean really?
Via lgbtqnation.com

+ Aral Balkan (and maybe others, possibly you even) is upset over the fact that Ello is funded by venture capitalists. He’s so mad he’s taking his social media and going home. IDK. I just like to say it with a British accent.

+ Feminist playing cards is a thing that exists. If you need further evidence that this is an item you need in your life, just check out the Queen of Hearts: 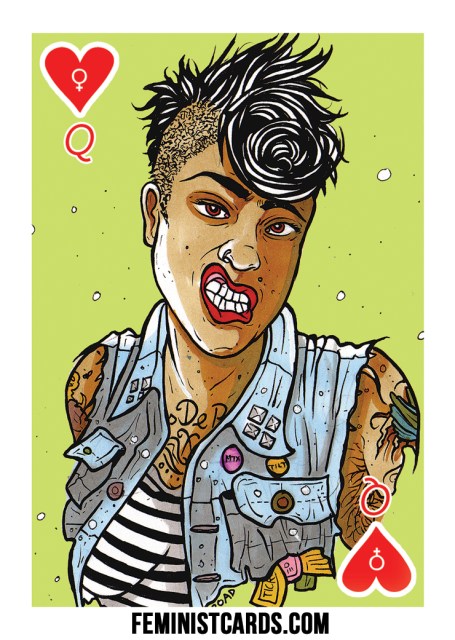 A Credit Suisse report found that, overall, companies with a market cap greater than US$ 10 billion that have at least one woman on the board of directors outperformed those that had no women at all by 26% for large caps over the six years leading up to 2011. 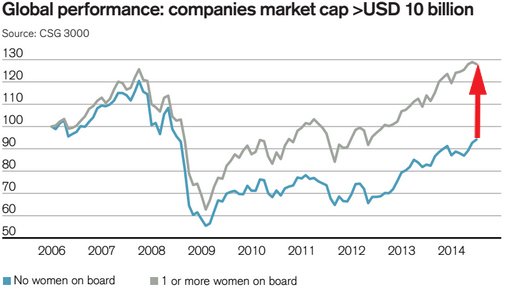 There are even charts to prove it.
Via businessinsider.com

+ LGBT students need to be part of the conversation about sexual assault on campuses.

Despite significant strides in creating safer environments for LGBT students, many still experience harassment and violence based on their sexual orientation or gender identity. As a result of their experiences, LGBT students are more likely to support policies at their colleges and universities that prevent sexual harassment and support survivors.

+ The Ruth Ellis Center is really great and they need our help.

We are part of the Rise Detroit Charity Challenge on CrowdRise along with several other Detroit Charities. The organization that raises the most money wins a $50,000 top prize. Our goal is to raise enough money to open the Drop In Center an additional night this winter.

I Know You Are, But What Am I?

+ Gillian Anderson has something to say about sexism in Hollywood and beyond. When Agent Scully talks, we listen and agree:

“There are things that are intolerable in today’s world in terms of the perception of women. Whether they’re vamps or vixens the expectation is that, if a woman is wearing a short skirt, she’s ‘asking for it’.” 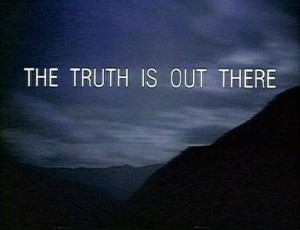 + This is about the Olympics, attractive women and internet bullies. I’m guessing you’re into at least 2 of these 3 things.

Doxxing is the Internet’s ultimate form of slut-shaming — and, as this latest case shows, it doesn’t just happen to women who have taken a naked photo of themselves. All it requires is being a woman on the Internet.

+ There’s gonna be a picnic in Newton, Australia in November. I hear there may be board games, which are the exact opposite of bored games.

+ I know everyone here likes brunch! You can relive past brunch greatness and help raise money for a charity at this pot luck brunch in Philadelphia.

+ In case you want your jewelery to be smarter than you are.