Hello, goonies! I’m proud to say that since returning home from A-Camp I have only cried a couple of times and only one of those times involved a police officer! Everything is going so fucking well you guys! To prove it, I’ve got a bunch of stories we missed this week and only about 75 percent of them involve fucked-up stuff.

Happy Love Your Body Day! I hope someone is loving on your body right now.

Tell Riese and Alex and the rest of the team that you love them! It’s easier than ever, now that the nicest petition of all time exists on this Earth.

Since 2009, Autostraddle, the most popular, independently-owned lesbian website, has focused on bringing ‘girl-on-girl’ culture to the masses through hilarious, provocative and emotive articles and columns packed with contemporary feminist ideology.

What started out as a personal dream for creators Riese and Alexandra, turned into a site that boasts 2.75 million views a month and is also the winner of the 2012 Bloggies’ Weblog of the Year Award and a nominee for “Outstanding Blog” in the 24th Annual GLAAD Awards.

Autostraddle has evolved from being just a platform for queer ladies to connect and talk about issues that matter most to them. In April of 2012, the site launched A-Camp, an event where Autostraddlers sign up for four days of fun activities, workshops, panels, classes, discussions and sports in the beautiful San Bernardino Mountains. The A-Camp team is composed of Autostraddle.com staff and Autostraddle Calendar Girls.

Aside from this, Autostraddle creators Riese and Alexandra, with help from their impressive team, have single-handedly created the most recognized and respected website that encourages community, honesty, courage, integrity and inclusiveness amongst lesbian, bisexual and trans* women.

By signing this petition you’ll thank the entire Autostraddle team for its commitment to equality and visibility in the LGBT community.

We love you, too! So fucking much.

Haring’s ’87 mural in Philly is being restored, which fills my heart with a unique, rainbow sort of joy. 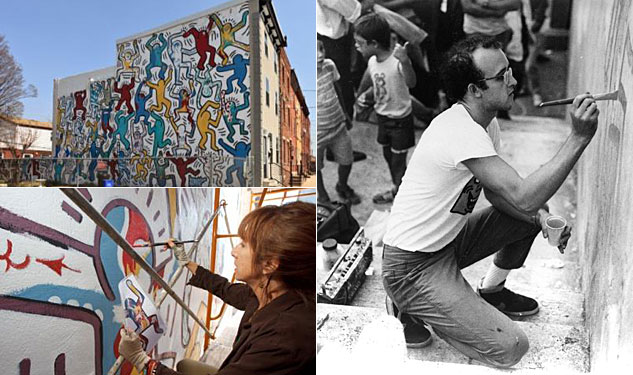 + In North Carolina, another rogue county clerk is taking matters into his own hands. And those hands are making sweet queer love possible.

+ Reading about Utah’s gay marriage debate makes me want to bang my head against a table until I lose consciousness and forget what I was reading.

On one side, the state argues it has the right to set as policy an “age-old and still predominant” definition of marriage as a union of a man and a woman. On the other, the three couples say the choice of a marriage partner is a “fundamental right and liberty interest” protected by the U.S. Constitution…

The state argues the case is “really about who decides, not who is right in this important policy debate.”

+ Paging Chris Christie: JWoww hates your gay marriage problem. She told the New York Daily News she’s “coming after” you, and that “if you have a problem with two people being in love, and you’re against gay marriage, I have a problem with you.” Those are fighting words, and I watched some of The Jersey Shore. All I can say is: fall back.

322 Jefferson Street is “a short film that reckons with queer identities, the intersections of race and class, and what it really means to be a twenty-something striving to define oneself in a radically diverse city.” And the team has mere HOURS left to fund their dreams! Go save their butts, grasshoppers.

+ This Florida Republican thinks lesbian moms are kind of like drug abusers. You know, because… nope, still waiting for that one to make sense.

+ “Virginity Testing” is still a thing. Guess where? CANADA. My entire sense of the world is shaken.

+ Malala, the smartest sixteen-year-old girl of all time probably, recently dissed Obama for his use of drones. You go, girl.

+ Wanda Sykes will follow your vagina wherever it goes.

+ Tina Fey and Amy Poehler will be making your dreams come true at the Golden Globes for two years! But not the dream you have where they make out. That will most likely not occur. But then again, what do I know. Kids these days, y’know?

+ Laura Prepon went on Arsenio to state the obvious: that girls are soft, fun to kiss, and really awesome to shower with. DUH.

+ INDIA.ARIE WANTS YOU TO DO YOU. I’M NOT EVEN FUCKING AROUND. IS THIS YOUR NEW THEME SONG?

+ Dana lives. And she’s #mamming. And she wants you to do it, too. (Also, Stef spotted Kate Moennig on a plane AND in a grocery store. Coincidence? Fate? Only time will tell.)

Vanderbilt Divinity School in Tennessee just appointed Emilie Townes, an openly gay black woman, as their Dean. I’m not even fucking with you. HALLELUJAH.

The ordained American Baptist, who previously held administrative positions at Yale, is being described by the school as a “pioneering scholar in the field of womanist theology.”

“I am excited about becoming part of this slice of God’s cloud of witnesses as we shape ourselves into being responsive to holding traditions and the future together,” Townes said during her convocation address, as reported by Christian News.

“Not out of a sense that traditions are static but with an appreciation for the fact that they are dynamic and actually morph and change, though slowly at times. And also not out of a sense that the future is some magic potion that allows us to neglect the work we must do today.”
Townes’ partner, Laurel Schneider, also joined the Vanderbilt Divinity School’s faculty this year.