Feature image of Caroline Rose Giuliani via her Instagram.

WELL!! I’ve been dreaming about double chocolate cupcakes all day for a reason that I can’t tell you about right now, but will CERTAINLY tell you about when we’re back together next week. Anyway, I believe that as soon as I publish this here roundup, I shall go bake some. What do you think? Is it worth it?

Rudy Giuliani Is My Father. Please, Everyone, Vote for Joe Biden and Kamala Harris.

Natalie: Caroline Giuliani is coming for Claudia Conway’s crown in the “I am sick of my parent’s shit” competition
Laneia: Oh I didn’t know Caroline Giuliani was gay, that makes this even better. (Note from me: I forgot that, too! And indeed it does make it even better!)

Over 500 LGBTQ Candidates to Appear on November Ballots, Shattering Records

Speaking of which, Mauree Turner Is a Black, Queer, Muslim Candidate Could Make History In Oklahoma

How a Pandemic Helped Me Come Into My Gender Identity (this also reminded me of Drew‘s excellent essay at right at the beginning of quarantine, What Self-Quarantine is Teaching Me About Gender Dysphoria. TBH, I think of Drew’s essay often.) 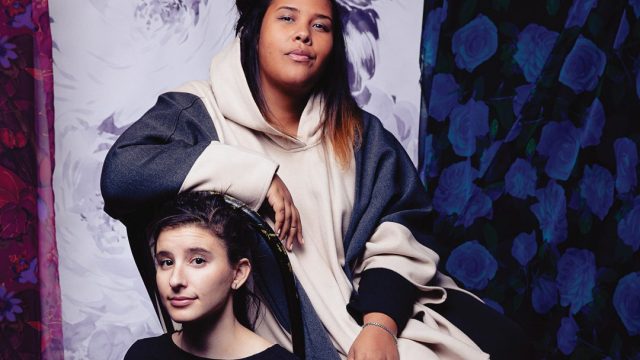 Oh you weren’t college sweethearts who moved to New York and became artists working with kids and somehow stayed in love with each other? Can’t relate.

A Space to GLOW. Ok full disclosure, this is from my college’s alumni magazine and is probably a shameless plug and use of my editorial privlege. HOWEVER, I remember this very adorable queer couple from when they were out girlfriends as freshman and I was a closeted senior and even back then they were thee cutest, and more than 10 years later they remain thee cutest. So, for those of you who enjoy a good romantic squeal during your evening readings, there you go!

Pennsylvania — Peppermint and Bob the Drag Queen and their many not-so-subtle trans pride flags are here to tell you to go vote in the silliest voter ad, with the most effective hook, I’ve seen yet this season:

But seriously, if your a queer teen who finds themselves reading my quirky tiny little news round up for any random reason today — you are loved. Each and every one of us, we love you. Keep fucking going.

Racism Is a Reboot: Binging Battlestar Galactica at the End of a World

It’ll Have to Be Completely Destroyed. Maybe American health care will have to burn to the ground before it can be rebuilt.

The Rural Poverty That Created Dolly Parton (From Heather: This excerpt is from She Come By It Natural: Dolly Parton and the Women Who Lived Her Songs, which I read in one sitting.)

“I miss being inside other people’s homes, especially in New York, where no one actually has a house. Instead, everyone has parties in overheated and overcrowded apartments, with overflowing recycling bags of beer cans and liquor bottles. People are always looking for more ice for lukewarm mixers. Some smoke on a fire escape or by an open window, which does little to prevent smoke from wafting throughout the entire apartment. Others sneak into the bedroom with the coats and jackets for some privacy, for drugs, sex, or a fight. Bathroom lines are slow, awkward, and passive aggressive, and a small group frequently huddles in a corner trying to adjust the lights and pick a playlist for a dance party. Later in the night, the truly hardcore will attempt to make the night last longer by convincing people to go to a bar or warehouse party. Every house party is actually the same. It’s their familiarity that makes me miss them as much as I do.”

I don’t know how to really describe this essay, other than to say that of all the “Leaving New York” style stories we’ve had to suffer through this year, damn is this the only one I ever want to read. And I want to read it again, and again, and again: Too Much to Miss by Summer Kim Lee for Post45

I still can’t bring myself to watch the Amy Coney Barrett confirmation hearings 🙃 — Republicans Have Seen the Enemy: Democracy. The Supreme Court is the last bulwark of their minority rule, and they’re determined to keep it.

What Does It Mean to Pack the Court?

And Just How Extreme Is the Anti-LGBTQ+ Organization That Amy Coney Barrett Has Ties To? By Kate Sosin for The 19th