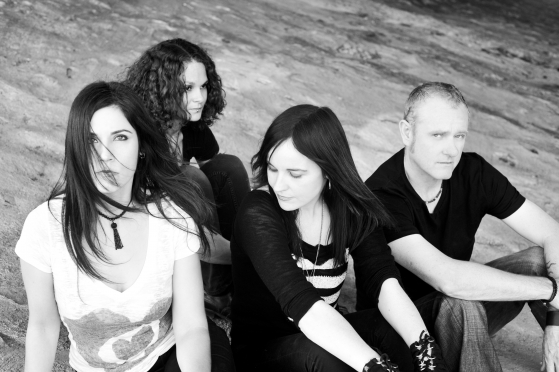 Saucy Monky is a Los Angeles-based alt-rock group formed by musicians from Ireland and the United States: dual front-women Annmarie Cullen and Cynthia Catania [vocals/guitar], Steve Giles [bass] and Megan Jane [drums]. Over the past ten years the band has conquered Europe via tour, soundtracked shows and movies such as iCarly and And Then Came Lola, and shared the stage with acts like PJ Harvey, The Black Eyed Peas, P!nk and Wilco. They’ve even survived an inter-band break up (Cullen/Catania) which is really just as impressive as all these other feats.

Right now Saucy Monky are riding high after the release of their rad new EP, Trophy Girl Part 1, which has produced the hooky single “Awkward” and a fairly queer music video that you can check out below. Part 2 and Part 3 will be coming to you in 2013.

In the Almost Famous hot seat this week is one of Saucy Monky’s frontwomen, Cynthia.

Cynthia: Indie rock with a touch of singer/songwriter panache.

Piano (and the like) since I was 13. Guitar since my 20’s and anything else I can get my hands on while recording.

I have an antique record player, with one crappy little speaker. I love to listen to Billie Holiday records. The latest guilty pleasure album was Cher.

I like it. A dream of mine is to make an electronic album. And a complete album of Saucy Monky remixes.

I would. That being said, I would TRY to introduce them to better music!

What was the worst job you’ve ever held so that you could pursue your music career?

I worked for a radio promoter. I think I lasted three weeks. Call time was 7am, deep in the San Fernando valley. The days were twelve hours plus, and I had to talk on the phone all day, trying to charm and convince DJ’s and program directors to play some awful A/C track. The office only had Maxwell House coffee, and fluorescent lighting. It was hell on earth.

Saucy Monky’s new EP, Trophy Girl Part 1, is available now via iTunes. It can also be streamed via the band’s website.

Everything else you’d like to know about Saucy Monkey can be found here: