GLAMBERT: Our Sexiest Man of the Year and overall Man of the Year Adam Lambert guested on Oprah yesterday rocking a Danny Zuko ‘do and a brown suede jacket. They chatted about dreaming the impossible dream and how he looked to the sky and said maybe this time he would be lucky, maybe this time he’d stay to the top 13, and how for him w/r/t the AMAs, it’s all about forgetting regret because life is yours to live. And so on and so forth and now here we are on Oprah, and he’s gay, and he’s foxy, and well most of the interview goes over material relatively familiar to those of us who’ve been following Adam Lambert’s every move, crotch grab and gay reference from Day One.  But we watched it again anyhow. And again. You should, too. Also Susan Boyle was on the show, I guess.

Oprah: “The fact that you have been so openly gay about it and open about it… you are paving the way for people who can exactly say who they are.”
Adam: “I hope so.”
Oprah: “Don’t hope — it’s happening.”
Adam: “It is?”
Oprah: “Yeah! You’re doing it!
Adam: “Yay!”

It’s cute/telling when he reveals the biggest perk — as it is for so many successful artists these days — is being “financially stable” while doing what he loves, after so many years of struggling now he has a house and can help his Mom out. Then Oprah goes “shopping” with Adam on Melrose and he jokes “that’s what I do all day, eat and shop.” They also chat about when he met Madonna.

+
Then he performed “If I Had You,” and it was awesome per ushe, though lately we’re wondering when they’re gonna take Lambert off probation ’cause it sometimes feels that his performances have erred a tad too conservative in response to AMA backlash. We can’t wait to see him get a little edgy Gaga risky again, but perhaps Oprah’s not the ideal venue. In other news, his album gets better every time we listen to it.

Queerty dares to ask Why is Adam Lambert Suddenly Such an Unimpressive Singer? and needless to say, our answer is “he’s not.” But really where has he been performing since the AMAs? Mostly on talk shows. I’ve never been impressed by anyone’s performance on a daytime or nighttime talk show besides Lady Gaga; and even then the occasional audience pans make me wince. Rarely does the show’s audience include genuine fans, or even potential genuine fans, and the faux-crowd’s strained, directed “enthusiasm” can be painful; though rarely as painful as the singer who’s forced to build melodic momentum and fake genuine synergy to a group of people that nine times out of ten wishes it was Taylor Swift day. Also, the whole ‘let’s pretend like it’s a nightclub even though McDonalds will still be serving Egg McMuffins when this shit is over” thing is weird. Then again, I can get a little Angela Chasey about these things, so.

HERSTORY: UC Santa Barbara Professor Leila J. Rupp has a new book out about the history of love between women. “In Sapphistries: A Global History of Love Between Women, Rupp reveals how, from the time of the very earliest societies, the possibility of love between women has been known, even when it was feared, ignored, or denied.” Holla! This sounds like a very interesting read. (@ucsb) 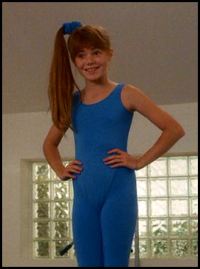 CHILD STARS: Nerve lists 10 Child Stars You’d Sleep With Today, now that they’re legal and all.  The first comment seems to suggest that they accidentally included Dakota Fanning who is not yet legal. Jenny Lewis is on the list you guys! Remember her from Troop Beverly Hills? I hope so, because that movie was amazing. We’d like to add Kristen Stewart. (@nerve)

HAITI: Lesbian web series We Have to Stop Now, starring Jill Bennett and Cathy Debuono, will be donating profits from subscriptions to help the victims of the earthquake in Haiti. If you haven’t bought your Season 2 pass yet, this is a great reason! (@shewired)

MATCHMAKER: Bravo’s Millionaire Matchmaker premiered its third season last night. Patti Stanger, the matchmaker, said there would be more gay clients this time around. But her observations about said clients? Well, they’re not something I’d expect to hear from a Bravo show:

“People come to us organically, and we don’t always get the people we want. And they’re not always in tune with our philosophies. Especially in the gay community, they want to have sex first and get to know each other second. Gays like to move way faster than the straight community. But you have to know somebody before you sleep with them. It’s like a job interview — you want to get all their qualifications and references first.” (@aol)

TEBOW: Former Florida Gators quarterback Tim Tebow has filmed a commercial for Focus on the Family that will air during the Super Bowl. The anti-gay, Christian political group has not detailed the contents of the ad, but it will probably focus on Tebow’s pro-life stance. (@outsports)

OUTRAGE: A new documentary about gay politicians came out yesterday (haha get it). The film “shines a light on elected officials whose policy decisions run contrary to the sexual orientations they allegedly keep shrouded in secrecy.” (@wapo) It’s kind of interesting when paired with the fact that there are 11 openly gay candidates running for office in Illinois this election season. (@chicagopublicradio)

EAST ENDERS: Natalie Cassidy says she left EastEnders in ’06 because her character was having a lesbian affair. It sounds like she thought it was sensational, rather than actually disliking the gay content, though.