The Supreme Court cases on marriage equality are bringing everyone who has anything to contribute to the national discussion out of the woodwork. After a set of prominent Republicans, President Obama and a huge group of businesses, the latest entity to make its feelings on the subject of same-sex marriage known to the supreme court is the American Academy of Pediatrics. And their message? That marriage equality (and the ability for gay families to become adoptive and foster homes) is in the best interests of children. 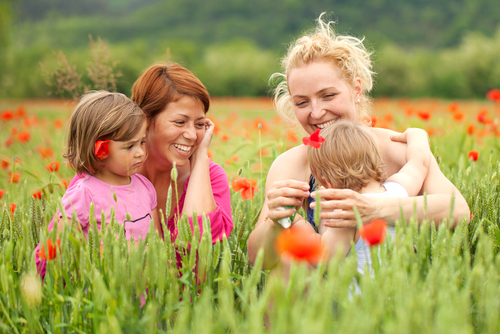 The Academy hasn’t submitted an actual amicus brief like other parties have, but has released a comprehensive report published in Pediatrics called Promoting the Well-Being of Children Whose Parents Are Gay or Lesbian which draws from over 30 years of solid research to conclude that far from protecting families, “traditional marriage” can hurt children. The abstract of their study sums up their important findings:

Extensive data available from more than 30 years of research reveal that children raised by gay and lesbian parents have demonstrated resilience with regard to social, psychological, and sexual health despite economic and legal disparities and social stigma. Many studies have demonstrated that children’s well-being is affected much more by their relationships with their parents, their parents’ sense of competence and security, and the presence of social and economic support for the family than by the gender or the sexual orientation of their parents. Lack of opportunity for same-gender couples to marry adds to families’ stress, which affects the health and welfare of all household members. Because marriage strengthens families and, in so doing, benefits children’s development, children should not be deprived of the opportunity for their parents to be married. Paths to parenthood that include assisted reproductive techniques, adoption, and foster parenting should focus on competency of the parents rather than their sexual orientation.

In addition to being very affirming, this report is a direct blow to what usually forms the foundation of the anti-gay argument against marriage or anything that gives stability to gay families: that it’s irresponsible to encourage families or parenting for same-sex couples because children need a mother and a father (preferably their biological parents) to succeed in life. Although most of the “research” that bigots use to support this argument is easily discounted as very flawed, there are still those that feel like there isn’t solid research supporting the opposite conclusion, either: that gay and lesbian parents can provide a stable and supportive home for kids. Studies like Mark Regenerus’ controversial one, which may have a mix of legitimate and useless data and conclusions, have clouded the issue for some people. But there’s nothing ambiguous about this statement or this report; it decimates the myth that same-sex couples aren’t capable of providing as good a home as heterosexual ones, it specifically calls for same-sex marriage and adoption rights, and even explicitly names the denial of these rights as harmful to children, not protective of them.

If past performance is any indication, anti-gay campaigners for “traditional marriage” won’t take this report seriously; not unlike a child struggling to maintain their belief in Santa Claus, they’ve proven themselves very willing to cling to anything that supports their views, no matter how dubious, and dismiss anything that doesn’t, no matter how compelling. But this time, anti-gay bigots aren’t the people we need to convince. This issue is in the Supreme Court’s hands now, and it’s their entire responsibility and purpose to carefully consider evidence such as the Academy of Pediatrics’ report. This new information can’t ensure that the Supreme Court will rule in favor of marriage equality, but to anyone paying attention to the actual facts, this may be a major blow to one of the most beloved anti-gay arguments of all time.