In a fast-paced industry where flavour is supposed to be the thing that matters, clashing personalities can take up just as much counter space as the mis en place. Although Food Network specials would have you believe that queer cooks are on equal footing with their cheftestants and frequently trounce them, sometimes talent doesn’t make a lick of difference in the real world. That’s what chef Dave Claringbould and his partner are discovering as their restaurant is being run out of their Manitoba town. 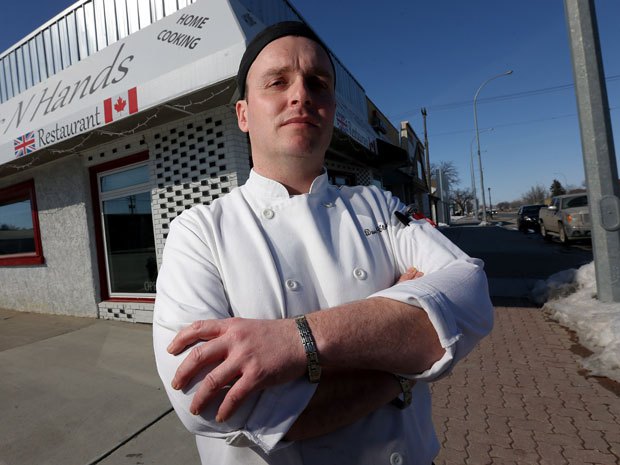 Dave Claringbould via the Canadian Press

The couple set up shop late last year in Morris, a city 50km south of Winnipeg. With fifteen years of restaurant experience behind him in the UK and Canada, Pots n Hands’ British home-cooked fare should have taken off. Unlike other restauranteurs that are being taken to task for gentrifying and diluting existing cultures, Claringbould had actually added to the community by teaching cooking lessons before he broke into the restaurant business. But instead of focusing on their food or philanthropy, a few patrons focused on what was in their bedroom. Although the restaurant was hardly an over-the-top gay smorgasboard, some townsfolk still discovered they were gay and wouldn’t stand for it. A few regulars just stopped coming, but others made a point of teaching the couple why.

“We were asked if somebody was going to catch something off of the plate because we had prepared the food on it,” Claringbould told the Winnipeg Press. Even though that comment is ludicrous since homosexuality is hardly a foodborne ilness, other citizens toute similarly outdated thoughts. George Ifantis, a fellow restaurant owner with no ill will towards the men, said, “A lot of people don’t like it. You don’t know what they’re doing in the kitchen.” Aaron Kleinsasser spoke to the Press after he left another restaurant, “They should get the hell out of here. I don’t really like them — the service and who they are. I agree (they should leave). It makes you feel uncomfortable. I’ve been in there twice, I believe, and I regret it. I’m never going to go back there again.”

Sadly, similar viewpoints are being echoed elsewhere in the province. Even though Canada is supposed to be a gay-friendly country (after all, gay marriage has been legal since 2004!), tolerance isn’t always apparent. On Easter Sunday, Chris McNally woke up to find his Winnipeg house defaced with homophobic slurs. The openly gay man had never been attacked before.”[I was] just sick to my stomach that someone or some people can be like that still.” Both of these incidents underline the need for change by emphasizing how outdated and close-minded citizens can be. 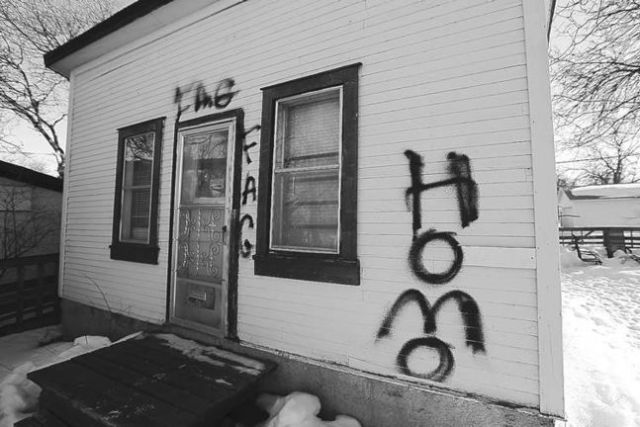 But all of that intolerance starts somewhere, so the NDP can hopefully curtail it by influencing the next generation. Last December, Education Minister Nancy Allen proposed Bill 18 or the Public Schools Amendment Act (Safe and Inclusive Schools) to take a serious approach to bullying and intolerance. The bill looks to codify a firm stance against all forms of bullying by students, teachers and volunteers alike, whether online or offline, at school or at home and whether it’s based on gender, race, ability or sexual orientation. The bill includes a clause ensuring that students can establish a GSA at any learning institution and provide a safe haven to all bullying victims.

Although the bill is meant to “promote the acceptance of and respect for others in a safe, caring and inclusive school environment,” most critics are focusing on the the GSA clause. A large number of Manitobans have blasted the bill from religious institutions that don’t want GSAs in their schools to Christian groups that believe gay bullying isn’t that big of a problem to political opponents that believe that religious students are the ones that need protection.But although they’re louder, gay-friendly citizens are managing to make their voice heard. In a rally last week, parents and children thanked the government for supporting the otherwise voiceless students. Evan Wiens, a student who has become a lightning rod in his hometown after attempting to start a GSA, sums up the problem, “They should not have to feel ashamed, and they should not have to feel like they have to hide themselves.” As it stands, bullying in all of its forms shouldn’t exist for students or adults.

Today, it’s clear that the work Bill 18 intends to accomplish is very necessary. Even though Morris’ mayor and several citizens have come out in favour of the Pot n Hands and shamed the intolerance, the bigots’ words cut a bit too deep for Claringbould and his partner. “Both of us understand this small group of individuals don’t represent the community of Morris and surrounding communities as a whole. But by no means are we ashamed of who we are and how we live.” For now, the couple is taking the disappointment in stride choosing to cut their losses and move on. Pot n Hands will serve its final meal on April 14th before the owners relocate to a different city. Meanwhile, McNally doesn’t have the option to leave, and has no choice but to stick around and paint over the slurs at his own expense. At a time when discussion of gay marriage is at an all-time high in North America, these incidents remind us that there’s plenty of hard work still to be done, and plenty of cultural and legislative hurdles for queer people to navigate when it comes to experiencing basic safety and respect in their communities. But hopefully when the legislature resumes on April 16th, Bill 18 will pass, helping to create a new batch of accepting and supportive citizens graduating from Manitoba’s school system.