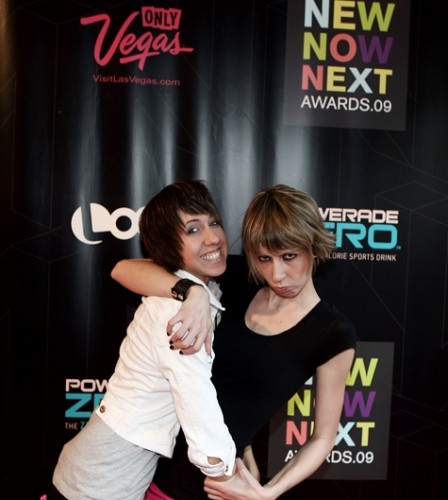 Last night A;ex, Robin, Intern Nicole and I (Riese) went to the Logo NewNowNext awards. I haven’t been able to watch the tape yet but I think it will involve a lot of tomfoolery and hijinks. We were at the end of the red carpet because of the patriarchy, but luckily I’m an experienced Obnoxious Person and I wrangled every vagina I could possibly find into our lair. KAZAAM! AND! You can see some of Robin’s awesome New Now Next photos right here.

Not to sound like a bitter gay or anything, but yes, I do believe Adam Lambert lost because he’s gay. I’m sure lots of people thought Kris was better, whatevs, that could be true your uniformed opinion your opinion. But at this point in time, how can anyone doubt the overwhelming power of the American people to rally around a ballot box for the purpose of ensuring gays don’t get what they want? These homophobic people are very good at voting against us, even when we are Rockstars. I’m sure Maggie Gallagher herself voted 50 times! C’mon peoples! Also, never doubt the power of a million tweens crushing on Kris Allen. Tweens aren’t messing around.

(Also, check out our Autostraddle Rountable on the ‘Is Adam Lambert Gay?’ topic here).

Anyhow, Adam don’t mind, ’cause he’s gonna be a star anyway. Here’s an interview from Good Day Wisconsin (what?) this morning, in which he’s totally cool about everything and looks toward the future, which we love!

+ I can’t even begin to imagine the mathematics on this one: Top 10 Sexiest Women of Twitter | First Ever 50 Hottest Women Tweeters List (@ Bikini Buys)

+ Is she serious? I’m so confused by this: Why bosses are right to distrust women who don’t want children… If she’s half of a lesbian couple who ‘borrows’ the wherewithal, I might cross my fingers that the child is not teased at school – but I understand. Even if she’s a 66-year- old pregnant pensioner, threatening to turn motherhood into a freak show, I might (indeed, I do) think she’s monstrously selfish and dangerously wrong – but again, more or less, I understand.” (@ Daily Mail)

+ I love it when The View yells at people. Seriously I do. Here Whoopi calls out Glenn Beck:

NH Legislature Fails To Pass Gay Marriage Bill: But did not kill the bill altogether. (@ On Top Magazine) -40

New Hampshire legislature may revisit same-sex marriage issue: New language is needed to specify that religious organizations can decline to take part in any marriage ceremony without incurring fines or risking lawsuits.(@CNN) +10

Mainline clergy OK with gay rights, cautious on gay marriage: Mainline Protestant clergy are generally more likely than most Americans to endorse gay rights, but only one in three supports same-sex marriage, according to a new study (@Pew Forum) +5

It’s time to end “Don’t Ask, Don’t Tell.” “What’s clear to me, a gay man who served for four years in the military, including in Iraq and Afghanistan, is that the most sensible change would be a full repeal.” (@ Wall Street Journal) –5

from Crystal:
I’ve become fascinated by an interactive visualisation project called ‘The Dumpster’. It essentially depicts the failed relationships of 20,000 American teenagers in 2005.

from Alex:
I have two goodies today, y’all. Firstly, I’m definitely putting one of these cruelty-free taxidermy deer heads on my wall when I actually get an apartment. They’re so cool. (@inhabitat)

Riese has written 2816 articles for us.