It’s been another successful week in the sitcommiest sitcom that ever sitcomed. But good news for all! I figured it out. I know why this show bugs me but is intriguing at the same time. 2 Broke Girls is secretly an HBO comedy that’s trapped on CBS. Right now you have this broad based sitcom with a lot of fat to trim (Asian dude, Russian dude, rich lady with kids) that is sneaking in these would be hip, non-PC, and dark jokes. Jokes that would work if the joke could be the joke instead of it being CBSed to death. And I understand. I really do. Because even if you tell a great joke but no one gets it, it’s useless. It happens to me all the time. That’s the problem here — they have to take well-crafted jokes and then alter them so a bunch of people that shouldn’t get the joke can get the joke. 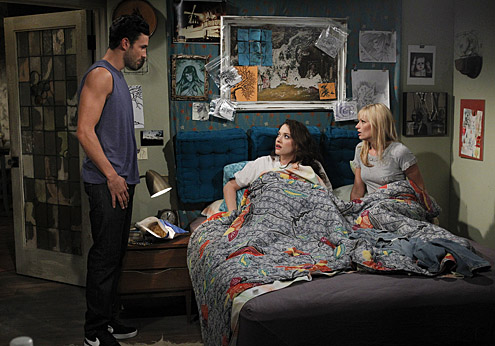 I don’t know if you’ve ever noticed but most sitcoms have patterns. It’s why drinking games based on shows are so successful. And by successful I mean if you followed the rules, you would be sloshed by the end of it. I’m going to develop some categories and see if I can plug one joke into them every week. Feel free to add jokes that fit into the categories in the comments. Or even make up your own category.

Max: Is there any way to do a Yelp review of Wharton business school?

Caroline: You sleep with a knife under your pillow?

Max: It’s the only home security system I could afford. And I’m a cutter.

Max: We’ve known each other for 2 days and you’re already asking for back door.

Max: You can’t tell an Asian he made a mistake. He’ll go in the back and throw himself on a sword.

Max: Earl, I have something new I want you to try.

Earl: That’s the exact same sentence that got me hooked on cocaine in the 80s.

Max: If I were gonna go lesbian, she’d be the last lez I’d be in.

Max: I’m already worried about me be being late…every month!

Caroline: Do you have any more of those poor people chips? 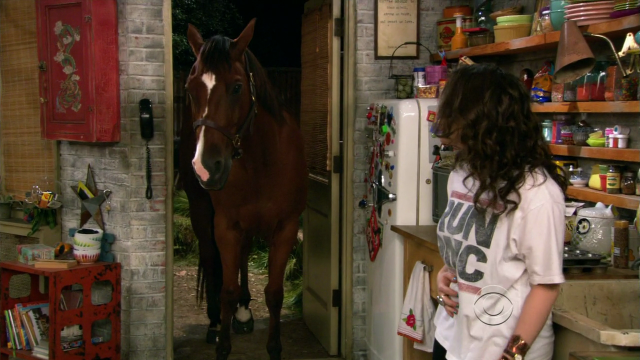 A final note: the horse is bugging me. Horses are not just expensive on the initial buy. They’re expensive to take care of. So how are they going to feed this horse? Who is gonna clean up the horse shit? How is the horse going to get exercise?  I don’t think the whole horse gag is worth its payoff. I suppose they have to keep it around so that when Kat gets in a jam, Caroline can show she’s a true friend by selling the horse in what will be a symbolic cutting of ties to her previous life…I’m guessing.

What did you think of this episode? Better or worse than the pilot?