Good morning! Have you felt attracted to a woman yet today? If you ARE a woman, the answer is probably “yes,” according to a new study from The University of Essex. Researchers showed erotic videos of women and men to 345 women, and studied their responses to the clips, such as “whether their pupils dilated when shown sexual stimuli.” They determined that although lesbians were only aroused by other women, straight women were aroused by both men and women. The study was conducted by Dr. Gerulf Rieger from the Department of Psychology, who claims that “lesbians were the most like men in their responses because it is usually men who show distinct sexual responses to their favourite sex.” Before we get any further into this information, I want you to know that Dr. Gerulf Rieger and his mentor have a rocky history with our community.

The good people at award-winning bastion of journalistic integrity, The Daily Mail, have interpreted Rieger’s data in a really special way: 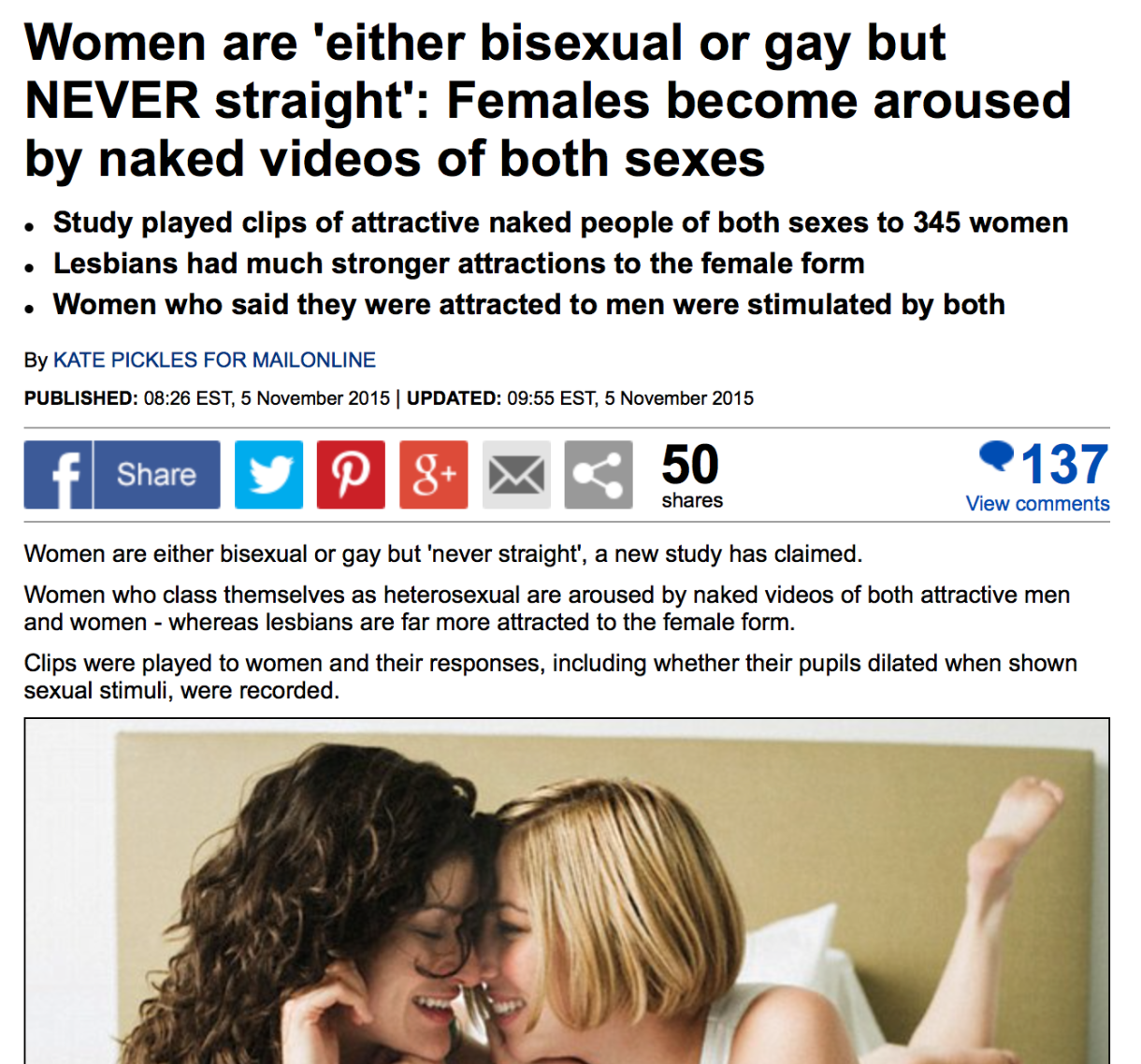 This isn’t an especially surprising headline considering that Rieger was a protege of noted transphobe J.Michael Bailey, who, according to Trans Road Map, “has made a career of splashy “findings” which are heralded uncritically by sloppy reporters and then later called into question and/or discredited after the damage is done. By then Bailey is on to some new “finding,” and the pattern of using journalists begins again.”

Dr. Rieger, who has long been fascinated with butch/femme roles in homosexual relationships, also determined the following:

‘This shows us that how women appear in public does not mean that we know anything about their sexual role preferences.’

Thanks, Gerulf! (Can I call you Gerulf? Thanks!). That’s right ladies: as logic would suggest, your public appearance is not inexorably linked to what you like in bed.

If you’re a social scientist or even a human being, you’re probably already side-eyeing the leap this conversation makes from “arousal” to “orientation,” because um, the kind of porn you get turned on by and the people you want to sleep with — let alone the people you want to date and build a life with — are not necessarily the same. The Daily Mail isn’t alone in using this research to claim that orientation and arousal are inexorably linked, The University of Essex’s own website opened their press release on this study with, “When it comes to what turns them on, women are either bisexual or gay, but never straight.” Now, here’s the kicker: some of the most publicized previous research claiming an absolute link between arousal and orientation was conducted by  — YOU GUESSED IT —  Gerulf Rieger!

In 2011, Northwestern recanted with a more well-rounded study that found bisexual men do indeed exist, and that “physical arousal is only one component of sexual orientation.”

However, it does seem to be true — anecdotally and otherwise — that sexuality is more fluid for women than for men, although some recent discourse has suggested even the commonly accepted truth that men are more sexually rigid than women might not be as “natural” as we’d thought and is more a product of our culture than our biology.

Regardless, the science on women being more likely to be into other women is abundant. A 2011 study from Boise University said 60% of heterosexual women are attracted to other women — although a closer look at the data reveals a much more complicated (but still relevant to this point) picture, and you can read my dissection of that data here. A 2014 study from the University of Montreal found that “even though many people may identify as straight, that doesn’t stop them from thinking about the same gender.” 36.9% of the 718 women they surveyed had fantasized about doing the horizontal mambo with another lady.

Still, there’s huge gaps between desire, action, orientation and that final leap — romance. What The Daily Mail and Dr. Gerulf Rieger gets wrong is that it equates sexual orientation with sexual response, which is pretty absurd. As over half of us know, getting a woman into bed is one thing, but getting her into a relationship is quite another! Even asexual people, who often have no sexual desire towards other people at all, often still have very specific orientations w/r/t gender when it comes to pursuing romantic relationships.

In conclusion, don’t believe everything Dr. Gerulf Rieger tells you. However, I think it’s safe to conclude, from my own observations of human life on this planet, that women are super-hot, and we can’t help it if everybody has a big fat lesbian crush on us.