It was almost one year ago that five members of Pussy Riot, a Russian feminist punk collective, performed their “Punk Prayer” in the Cathedral of Christ the Savior in Moscow, asking the Virgin Mary to drive Vladimir Putin out of the church. They themselves were chased out of the church by security in under a minute, but once a video of the events hit the internet, a global feminist movement was ignited. Maria Alyokhina, Nadezhda Tolokonnikova, and Yekaterina Samutsevich were arrested and charged with felony hooliganism motivated by religious hatred; but that was only the beginning. The three women, also known as Masha, Nadya and Katya, captivated the world with their beautifully articulated court statements that called for freedom from oppression. Throughout their trial, the women were supported by other grassroots feminist activists, as well as celebrities like Madonna and Paul McCartney. Despite the global outcry of support, they were sentenced to two years in prison.

In honor of Pussy Riot, The Feminist Press in New York City put together an e-book of their letters from prison, courtroom statements, defense attorney closing arguments, poems, and the punk prayer that started it all; as well as tributes to the band by Yoko Ono, Eileen Myles, JD Samson and more. The profits of the e-book sales went to Pussy Riot. 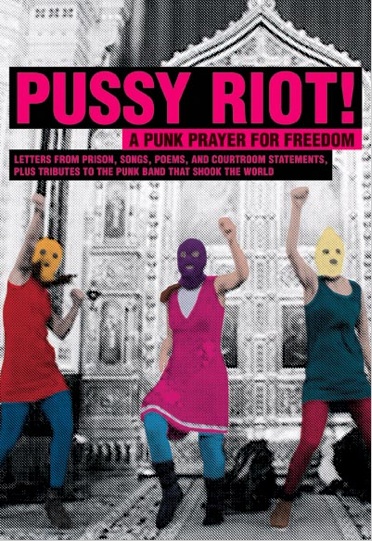 via The Feminist Press

On February 7, at Barnes & Noble Union Square, the print edition of  PUSSY RIOT! A Punk Prayer for Freedom is launching, and you should really go to it. The print edition is an updated version of the e-book and includes new courtroom statements from the October 10 appeal, as well as tributes by Bianca Jagger, Peaches & Simonne Jones, Tobi Vail, Barbara Browning and Vivien Goldman. The event itself is going to be super amazing: Justin Vivian Bond, Barbara Browning, Vivien Goldman, Karen Finley, Johanna Fateman, Eileen Myles, and Laurie Weeks will be reading from the book! Eileen Myles, you guys.

This the the first publication of Pussy Riot’s words. Their significance has been largely left to the media to interpret, and in that process their original intentions are often glossed over, minimized and dismissed as rabble rousing rather than purposeful activism. The book provides a unique opportunity to read Pussy Riot’s mission straight from the mouths of the brave women who sacrificed so much to make the world hear their punk prayers.

Here are some excerpts from the appeal statements in case you don’t believe me about how exciting and important this is:

We are not guilty. I think this is obvious. I also think that our court sentence should be declared invalid. Dear believers, we did not want to insult you. We have never had such intentions. We went to the cathedral to voice our protest against the merging of religious elites with the political elites of our country… We have been jailed for our political beliefs. Even if we are sent to Siberia we will not be silent.

It’s painful for me to hear that I am speaking out against religion. I have no religious hatred and never have. I want to warn that everything that is happening in Putin’s third term is leading to the end of stability. In two years there will be civil war, because Putin is doing everything to ensure that… We’ll be going to a prison colony while civil war is brewing in this country. Putin is doing everything to make this happen. He is setting people against each other.

If we unwillingly hurt any of believers by our actions, than we apologize for that. The idea of our action was political, not religious. In our previous actions, as in this one too, we have been protesting against the power of the current president, against the merging of the church with state authorities, and against the political statements by the patriarch. Therefore I believe I have not committed a crime. This is the joint position of all three of us. There is no split within Pussy Riot.