Hello friends, I am here to tell you another thing about F To 7th, the new lesbian webseries created by Ingrid Jungermann of The Slope. You may remember that I originally asked you to help Kickstart this series, and then last week I showed you an exclusive teaser video that included Amy Sedaris and all our favorite words. Now I’m going to tell you how you can see the webseries before it goes live on your computer screen, for exactly zero dollars! You just need to be in New York and free this Thursday night. 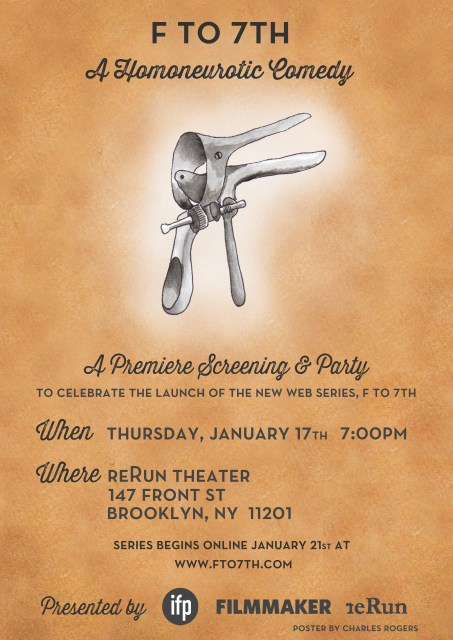 The Independent Filmmaker Project, the nation’s oldest and largest organization of independent filmmakers as well as the premier advocate for them, is hosting a free preview screening and party to celebrate the launch of F To 7th at the ReRun Gastropub Theater in Dumbo, Brooklyn. The event will include performances by cast and crew members including Ann Carr, Charles Rogers and the all-female NY improv troupe, Wicked City. Also I’ll be attending, possibly with Lemon but probably by myself, and I’m going to need somebody to sit with, so you have to come, okay?

If sitting next to me during the screening isn’t incentive enough to go, here’s a refresher about what this funny new webseries is all about.

A spin-off of the web series The Slope, F To 7th follows Ingrid as she struggles to find her place in a world where sexuality and gender have left her old-fashioned lesbianism behind. The eight-episode first season features guest spots by Amy Sedaris (Strangers With Candy), Michael Showalter (Wet Hot American Summer), and Gaby Hoffmann (Louie), each playing very different characters. Showalter plays a competitive dog owner with Isaiah Stokes (Louie) while Sedaris plays Ingrid’s conservative Aunt Kate who is a tad too interested in her sex life.