For more info on sending in questions, see the bottom of this post. Let’s get down to bossing people around on the internet! Today we help you deal with a jealous girlfriend.

Q: My girlfriend is the only girl i’ve ever been with, but she seems to be concerned I’m going to leave her for a guy and that she’s not enough for me. I’ve told her so many times that she’s the only one I want. How do I convince her I don’t miss the penis? 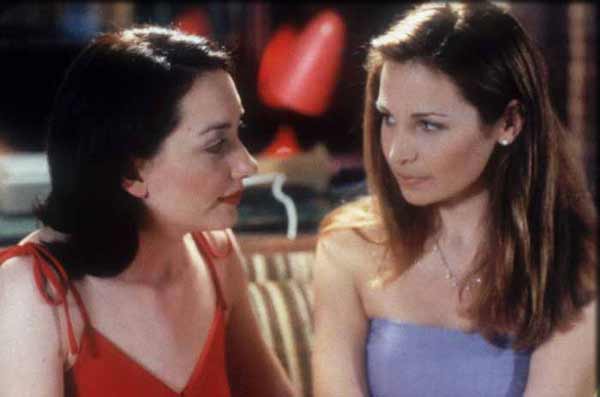 THIS IS A MOVIE AND NOT REAL LIFE

A: Okay, so this situation sucks. It sucks for everyone. It sucks for her because she feels nervous and insecure and jealous and that’s no fun, and it really sucks for you because you feel defensive and confused and hurt because you’re being punished pre-emptively for something you haven’t done. It’s hard to be in a relationship where you feel like you can’t trust the other person’s love. It’s also really hard to have the person you love tell you, essentially, that “I think you’re totally capable of doing something deeply hurtful to me, and you just haven’t had the opportunity yet.” Because that’s what it feels like, isn’t it?

I mean, the context isn’t that uncommon. Okay, so you’ve dated men, okay, so that worries her. She’s not the first, she won’t be the last. But here’s the thing: while I don’t know your whole deal, and I guess it’s possible you met in queerio blindfolded no-questions-asked speed dating where you were only allowed to communicate via interpretive dance, but I’m guessing she knew that you’ve dated men before you two were in a relationship. Basically, she knew what she was getting into. That doesn’t mean that she’s not allowed to have insecurities; we all do. It doesn’t even mean that there isn’t a healthy way to talk about those feelings.

But bottom line, it’s unfair to enter into a committed relationship of any level of seriousness with someone if you don’t plan on trusting their commitment to it. The situation isn’t feasible in the long run; something has to give, you know?

Are her issues coming from your actual relationship or somebody else’s? Chances are good this has less to do with you than it does with something her ex did, or her ex’s ex, or even something she did once. You’re not her ex and you shouldn’t be blamed for things she did, and on the one hand you can’t ever really “convince” her of anything in that case, but just keep on being you. Sometimes people bring baggage into relationships that take a little extra time to deal with, and if this is her own personal baggage from some other relationship, then talk about that. But if her jealousy isn’t actually about you, then nothing you do is going to make it go away. I do not, personally, ascribe to the belief that the love of a good woman cures all things. (See: Jal and Chris.)

So if it’s not about your relationship or somebody else’s, then it’s about her — about her worry that “she’s not enough for you.”  Find out where that’s coming from, and deal with that on its own terms. She’ll eventually have to do her own legwork to work through that issue, but open the door.

There’s a degree to which your situation is specific to bisexual/non-gold star women dating other women, in that you’re being made to shoulder the huge, evil weight that we assign to the Imaginary Awful Slutty Cheating Bisexual Girl Who Is Probably Straight Anyways. But also — and she should know this — your situation is the same one that a lot of couples, straight or gay or whatever, have to deal with. Why we have trouble trusting each other sometimes. Yes, relationships usually end, and sometimes people hurt each other, and sometimes they even leave relationships to enter into other relationships with other people. But we can’t let that stop us from loving or trusting other people, at least not if we want to be happy. It’s not unfair to want your partner in a monogamous relationship to be faithful, and to love you as much as you love them, but it is unfair to refuse to have faith in them.