A friend of mine just came out to me (and to herself) as asexual and I really want to help her find resources and support online so that she can feel like she’s part of a community. Do you know of any good articles and blogs for baby aces that I could send her way?

Hello person who sounds like a good and supportive friend! Even with all of this raised awareness for some of the letters in LGBTQ+, there’s still a lot of people who don’t know very much about asexual people, so I’d bet that you’re far from alone in wondering this.

First off, I’m going to give some general advice. I think that by looking for resources and wanting to help your friend with this exciting new part of her life you’re already doing something good to help her. I know when I came out as trans and a lesbian, I mostly wanted to know that the people I love still loved me and still wanted to be my friend. I also wanted to know that, although they would embrace my newly open identities, they wouldn’t treat me like a stranger or weirdo. So I think those are important things here. It’s good that you’re here looking for help for your friend, but I also think it’s important to make sure that your friend doesn’t feel like you’re only seeing her as your “asexual friend” now that she’s come out.

Now, I’m not exactly an expert on being asexual, I’m not asexual and I don’t have a ton of knowledge about asexuality (although I do suppose I have more than a lot of people). What I do have is a brother, Pete, who is asexual! More than that, I have a brother who is asexual and was happy to talk to me about their experiences coming out as asexual and finding the very same resources and community that your friend is looking for! So in order to answer your question, I posed a bunch of questions to them and put the answers right here for you to read.

Mey: Hi Pete! First of all, how would you describe our relationship?

Pete: Gosh, ha ha, well, you’re my older sister and I’d probably say you’ve been one of my best friends for probably most of my life. You can be kinda high maintenance but you’re cool and I look up to you, and I usually feel like I can talk to you about stuff. 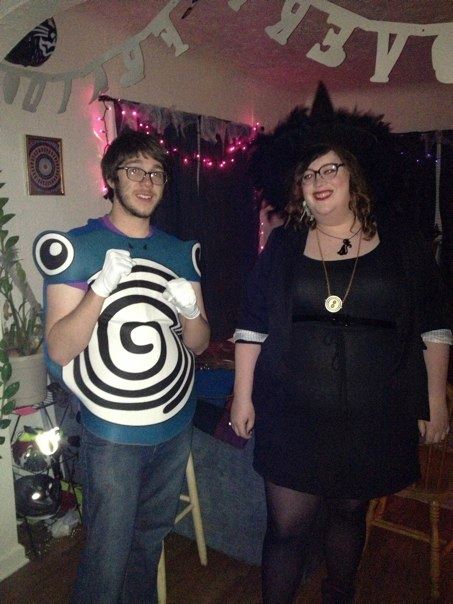 Pete and I on Halloween a few years ago, they’re a Pokemon and I’m a witch (obviously).

M: Ha! I am pretty high maintenance. How would you describe your gender/sexual identity?

P: I’m a non-binary queer ace. I don’t know if I really have a gender? Sometimes I say my gender is “werewolf,” ha ha! I only experience sexual attraction very rarely and to be honest I’m not really sure if I know what it is. I don’t think I really have a preference when it comes to the gender of my partners and I’m currently in a long-term relationship with my great girlfriend, Ceci.

M: So, can you tell me more about your ace identity and what it means to you?

P: Yeah! I identify as ace or ace-spectrum. That means that I don’t (or only very rarely) feel sexual attraction to people. I used to call myself demisexual (only feeling sexual attraction to a person after I’ve formed a strong bond with them) but the more I’ve thought about it the less sure I am that I’ve ever felt sexual attraction or that I even really know what it is. I might still be demi but at least for now just calling myself asexual is easier. It’s just a nice simple way to express that how our society and non-ace people talk about sexual attraction doesn’t really make sense to me.

P: Before I found out about asexuality I definitely felt like… outside of a lot of stuff. I’d pretend I had crushes on celebrities so that when my friends were talking about which actors or actresses were hot I wouldn’t seem weird or different. My classmates and the people around me would talk about their relationships or who they wanted to date and I just… didn’t get it. I always felt like I’d just be interested in that stuff later. I felt like I was different and kind of missing out on stuff that everyone around me was going through.

M: I’m writing a “You Need Help” for someone who wants to be there for their friend who just came out as asexual. What do you want people to do when you
come out as ace to them?

P: When I tell people I’m asexual, mostly I just want them to understand? I feel like my aceness sort of explains a lot about me. When I tell someone I want them to be like “okay, yeah, that makes sense,” and be cool with it. And I like it when people ask me questions about it so they can understand better. I mean, I can get pretty anxious if I’m put on the spot or something but if people ask nicely or one-on-one I’m usually more than happy to help explain.

What I don’t really want is for them to say something like “oh you just haven’t met the right person,” or “have you tried it?” Like, some people seem to think those are innocuous things to say but really they kind of boil down to “I know you better than you know yourself, and you’re wrong about your own feelings and experiences.” Fortunately I haven’t gotten too much of those, though, people have mostly been great to me.

M: What resources would you suggest for a person who just came out as ace?

P: When I was first learning about asexuality, I did a lot of reading on the AVEN wiki. I can’t really recommend the AVEN forums because they’ve had a lot of problems (like racism) but I remember the wiki being helpful to me. There’s also some good tumblrs, if you can parse through, like, The Discourse and oversimplifications. [Ed. Note: Here, “The Discourse” refers to discussions, sometimes overly verbose or hyperbolic, about a topic, usually revolving around theory or deep concepts related to oppression or “social justice” issues.]  Metapianycist has a great tumblr and swankivy, who also has a nice archive of YouTube videos on asexuality has a pretty great tumblr as well. She also had a book about asexuality published not too long ago called The Invisible Orientation and what I’ve read of it is great. I know she talked to a lot of ace spectrum people (including myself) about all the topics in the book, in addition to drawing from her own experiences as an asexual person. There’s also the (A)Sexual documentary which, last I checked, is on Netflix, and while it’s a little dated now and it’s not perfect, it has decent 101 ace stuff if you want to have discussions afterwards. Just remember when you’re looking up resources that a lot of things asexual people are put through by society overlap a lot with racism and homophobia, etc., and things written by white aces, or heteroromantic aces, might not acknowledge important things to remember about those issues. 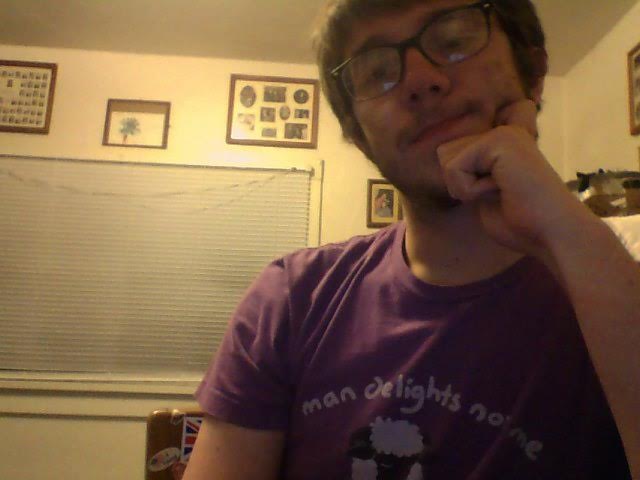 Here’s Pete wearing an asexual pun shirt that says “Man delights not me no, NOR woman neither,” which is both a line from Hamlet and a joke because NOR stands for Non-Oriented Ram, which I guess is a scientific classification for asexual rams. It’s also the colors of the Asexual Flag. Jeez, that’s a lot of asexual layers.

M: What about some resources for someone who’s friend just came out as ace?

P: All of the resources I listed should be great for someone whose friend just came out as ace as well. I do want to say that the Internet is probably your friend and you can find a lot of people talking about asexuality on livejournal and tumblr. It’s also good to remember that everyone is different and there isn’t one Unified Asexual Monolith, so your friend’s experiences are probably unique in a lot of ways, so politely ask them if you have questions. It’s not their job to educate you but if they’ve come out to you they probably trust you a lot and want you to understand them, so if you ask politely you might get some good answers.

M: What are some places where you think ace people, especially newly out ace people, can find support?

P: I feel like I’m sounding like a broken record but I’ve found a lot of support on tumblr. I’ve made a lot of really good ace friends there and for the most part it’s been really great for me. There’s been a lot of asexual spectrum people on tumblr as long as I’ve been on there using various tags (asexuality, demisexual, etc). I’ve also found support from local QSAs or other similar groups, but it varies from group to group. You can also send me a private message me here on autostraddle social.

M: Lastly, what’s your favorite thing about being ace?

P: My favorite thing is probably that generally it’s like, if using the Asexual label is comfortable, or good, or helpful for you, you’re welcome to it. Even if you realize later that you’re not ace anymore, or never were, you can use it while you’re figuring things out. A lot of the people I’ve met through ace communities have been really welcoming and it’s just been great. Like, it’s pretty easy to find people who will talk to you about asexuality if you’re questioning whether you’re ace or not. It’s also super great to be able to read stuff from other people who’ve experienced the same kind of stuff that you have, when you’d thought they were experiences that made you different and weirder than everyone around you.

There you have it! Doesn’t Pete have a bunch of great advice? I hope this has made asexuality a lot less intimidating to both you and your friend. I also found this cool video from our friends at First Person that talks some more about asexuality, maybe you could watch this or share it with your friend or even watch it together (as long as she doesn’t think that’s weird).