It’s been a long fucking week, guys. I was going to just make up a post about how Lady Gaga had sex with a unicorn and gave birth to world peace. BUT GUESS WHAT. I don’t have to, because California decriminalized weed, and so I can go on tomorrow with the conviction that there is some kind of higher power, and that good still exists in the world. Really, stop me if I’m being melodramatic, but tell me that you did not just live through the week/month/everything that we just had and then look at this news story and not cry a little, the way you do at a wedding or when a baby is born. This is beautiful. We are grateful.

me: do you think i can i make this the top story
laneia: do it, this is the best news i’ve heard possibly all week 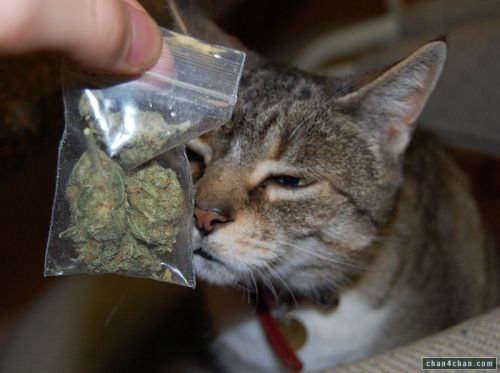 THIS CAT WOULD ONLY HAVE TO PAY A SMALL FINE

Now, while decriminalizing marijuana is not the same thing as legalizing it, the penalties for being caught possessing less than an ounce are SIGNIFICANTLY less.

Those caught with less than an ounce of marijuana will still receive a maximum penalty of $100. However, Senate Bill 1449 reduces the legal categorization of marijuana possession from a misdemeanor to a civil infraction. This means that those caught will not have to appear in court, pay court fees or receive a criminal record. Schwarzenegger opposes Proposition 19, a pending referendum that will provide a legal framework for the sale, cultivation and taxation of marijuana. However, despite this opposition, Schwarzenegger signed the bill into law.

Look, someone else on the internet is almost as excited about Brittany and Santana touching each other’s vaginas as we are. They’re queer icons! “For me, Brittany and Santana represent a new mode of queer figure, similar to the adolescents described in Ritch Savin-Williams’s The New Gay Teenager: fluidly sexual, comfortable with same sex contacts, and more interested in finding happiness than finding the right label. They may not fit into the rigid strictures of traditional sexual identities, but they’re comfortable enough with themselves not to care.” (@jezebel)

Cassandra Cass is joining the ranks of successful trans TV stars who are increasing visibility and changing hearts. “When Showtime came up with “Wild Things,” Cass was cast as one of three transgender people on a road trip across small-town California, working at odd jobs to raise money for an ill relative. The eight-episode show, now midway through its run, airs at midnight on Showtime’s Sho 2 and Showtime Showcase channels. It’s equal parts midnight movie, catfight and tear-jerker. With the cowboys and mechanics they meet along the way, the stars discuss their troubled upbringings and the discrimination they’ve faced from people who can’t accept them. Cass said she has not been invited home for the holidays in years and has nieces and nephews she has never met.” (@ontd)

Probs it would be best to find a Technostraddler for this, but they’re not here so we’re just gonna run with it. Wonder Woman is getting her own TV show guys! That is a thing that’s happening. The original article seems to kind of miss the point on why this is awesome (“Wonder Woman has presented a challenge both for feature and TV creators. That’s probably because she is the most famous female superhero in the testosterone-dominated comic world. And because she also is a big feminist icon.”) but that does not mean we will not be excited for/watch it. Who will play her/who will we see in a shiny patriotic bustier? Only time will tell! (@deadline)

In actual important news, the new head of the Marines, James Amos, is a general who has voiced definite support of a DADT repeal in the past. He says that the Marines will still obey the law, whatever that turns out to be, but I’ve said that about a lot of things, and now I work for this website! So, you know, light on the horizon. (@advocate)

IN CASE OF GAGA:

Is that any better? Do you feel okay? Are you able to face the week? I wanna make you feel better. Look, here are some vegan cookies and here is a poem I like that makes me feel better sometimes. I don’t know. I love you. Let’s all make each other happier today.