Welcome to You Brew You! A series dedicated to all things homebrewing. Have you ever wanted to make your own beer? You probably will by the end of this post.

So you want to brew your own beer. It’s a hobby that is its own reward. Whether you drink Bud Light or craft beer, brewing your own is a great way to save money, develop recipes and get in good with the ladies.

What’s great about homebrewing is that you can do it in any amount of space with virtually any budget. You can have a two-gallon keg in your city apartment and do extract brewing in small batches, or you can have a farm where you grow the barley and hops that you then harvest, grind and make into beer. (FYI, that last one is my retirement plan.) 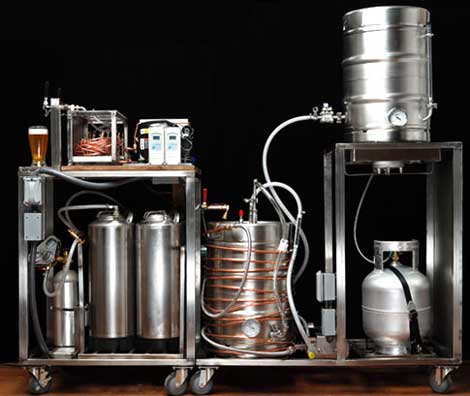 A serious homebrew setup via Manzine

If you are new to the business of brewing, watch this great Discovery Channel How Stuff Works episode on beer.

In the episode, they mostly show large-scale brewing, but homebrewing isn’t very different. You have the same ingredients: barley (or some other fermentable grain like wheat or rice), hops, yeast and water. You have the same process: cooking the wort, pitching the yeast, fermenting and carbonation.

This post will introduce you to the world of homebrewing, and suggest some ways you can get started without breaking the bank. I’m going to concentrate on small-batch extract brewing, because it’s the easiest and cheapest way to brew good beer on your own.

Most beer can be divided into ales and lagers. Ales are fermented at room temperature, and lagers are fermented in temperature-controlled cold rooms. For the most part, you’ll be focusing on ales for homebrewing. Don’t worry. If you’re a fan of lagers, there are ways to brew ales that taste a lot like lagers.

Types of beer. Learn it. Love it. via Beer Wiki

The mix of stuff in which you put your yeast is called wort. Wort is made from either mixing malt extract with water (extract brewing), or from cooking the grains from scratch (grain brewing). For the purposes of simplicity, we’ll be concentrating on extract brewing, which takes less equipment, less time, less space and less expertise.

If you have a homebrew store near you, I’d recommend purchasing a kit in person to suit your needs. If you don’t, you can get this stuff online at sites like Mr. Beer, Midwest Supplies, Northern Brewer or Amazon. Here’s what you’ll need to get started:

+ either a 2-gallon Mr. Beer keg OR all of the following (recommended, which usually come bundled in a beginner kit):

+ a large pot to cook the wort
+ bottles (1 gallon of wort produces about 6 12-oz bottles of beer. And yes, you can recycle old bottles; just make sure to clean them out properly.)
+ new bottle caps
+ bottle capper
+ sanitizer designed for brewing (you can buy this from any place that sells homebrew equipment)

To get started, equipment will cost you anywhere from $50 – 100. But once the initial investment is made, most of your running cost will be for ingredients and every once in a while, equipment upgrades.

There are a million recipes for homebrew beer. Even with extract brewing, you can get quite creative with an endless combination of extracts, yeast, hops and additives like honey, syrup, fruit, nuts and even peppers. You can find many recipes online. Brewing stores usually sell bundles of ingredients for certain recipes, especially seasonal recipes. You can also go to communities like Homebrew Talk and the American Homebrewers Association. These forums can get quite complicated, though, so for simple extract recipes and their endless customizations, stick to places like the Northern Brewer Forum and Mr. Beer Forum.

Brewing is not for the impatient. It’s a science that requires a lot of time to get right. You have to sanitize everything before you begin mixing your wort. And I mean everything, from your pot to your bucket to the spoon you use to whatever you rest that spoon on. Introducing even the slightest smidgen of bacteria can ruin a batch of beer.

Fermentation can take anywhere from 2 weeks to 3 months. Once the beer is bottled, it can be conditioned anywhere from a week to 6 months. Some beers taste better the longer you wait to drink them. Have patience, and you will brew some good beer.

Autostraddle’s very own Cheers Queers writer Meredith is putting together Sisters In Craft, a Ladies Pint Night at Atlantic Co. in Brooklyn this Sunday. Go enjoy!

Next Time on You Brew You:
Thanks for tuning into Homebrewing 101! Next time, we’ll be getting started with a basic extract recipe. Oh, and if you’re interested in the history of beer (albeit simplified), you should check out How Beer Saved the World.