Hot on the heels of her brand new single “For Once In My Life,” Melanie B (née Brown, formerly known as Scary Spice) visited the set of the Howard Stern show this morning to discuss… whatever it is that one discusses on Howard Stern. As Melanie and Howard have been co-hosting America’s Got Talent together as of late, they already had a comfortable rapport, and Mel opened up about her already widely reported but seemingly rarely-discussed bisexuality.

Although Melanie B’s most notorious public romance was with noted Nutty Professor Eddie Murphy, the press has often speculated about her relationships with women. In 2004, Mel was photographed kissing her then-girlfriend, film producer Christine Crokos, with whom she was in a relationship for several years. She said at the time, “People call me lesbian, bisexual or heterosexual, but I know who’s in my bed and that’s it… I have a huge libido and a great sex life.” In this morning’s interview, Stern asked Mel about her five-year relationship with mother-of-two Christa Parker, and she confirmed that the two had been very much in love.  Since their relationship’s end, Parker has gone on to make very public claims about Melanie’s mental state and her marriage, alongside another woman named Elizabeth Rodriguez (who claimed to have engaged in several drunken threesomes with Christa Parker and Scary Spice). Honestly, you guys, with all the time we spent pining after Sporty Spice in her track pants, this somehow flew completely under the radar. 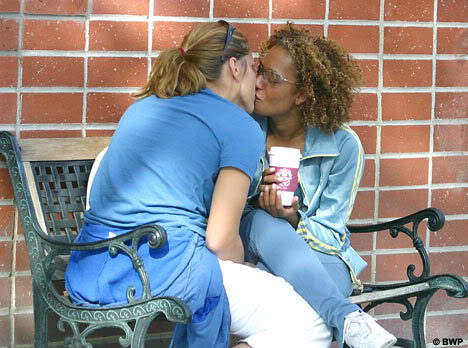 but any fool can see they’re falling, i gotta make you understaaaaaand…

In interview posted on Sway’s Universe a couple of weeks ago, Mel described her predilections during this time as a “bisexual phase”, though she claimed said “phase” had only lasted about a year. She went on to say she’d trained her husband to “act like a lesbian” in the bedroom, deeming him “perfect.” She was then asked if she and her husband ever engaged in threesomes with women or if they would consider it in the future, and Mel winkingly declined to answer either question.

During this morning’s interview, Howard Stern asked Mel if she’d ever been attracted to the other Spice Girls, and she replied, “Always, they’re my homies!”  Brown added that she’d kissed the whole band at one time or another – “I got my tongue pierced and I wanted to try it out so I kissed all of them.”  It seems that there was perhaps more going on in the Union Jack-emblazoned double decker Spice Bus than our fragile teenage brains could have handled at the time. Who can say what the heart wants, what it really really wants?

Various problematic statements about bisexuality aside, her new track “For Once In My Life” is actually pretty harmlessly catchy, especially considering her last memorable solo single was 1998’s Missy Elliott collaboration “I Want You Back.” In the video for her dancefloor-ready anthem, Mel actually does kiss another woman… herself.