When my roommate told me about “Attention: People With Body Parts,” a multimedia project by her friend Lexie Bean, I was struck by the powerful simplicity: People of all kinds are asked to submit a letter in any form to some part of their body. The results include both lighthearted quips to donated plasma and heartbreaking pleas, like one addressed to a uterus after three failed pregnancies. Reading them feels almost like snooping in someone’s diary, and that confessional aspect was part of the project’s origins, according to Bean. She first wrote a letter to her leg hair in 2012, when she was living in Hungary and struggling to find physical, and therefore emotional, security. Her community was “scattered,” and she hoped to make her own body into the safe space she lacked from the outside. After returning to the United States, she opened the project to her friends, and in 2012 she released a book compiling more than 40 responses and started a website to compile multimedia responses.

Early this year, she decided to expand the project further and began contacting organizations to help her collect letters from survivors of domestic abuse. The resulting book, Portable Homes, available today, includes letters from people across the country whose lives have been affected by abuse. In January, Bean and a group of supporters and performers will take a 14-city tour to present the project across the U.S. and Canada, presenting the project through a series of workshops, readings and performances This weekend, I spoke with Bean and her organizing partners Lisa Neumann and Caroline Mills about how the project has evolved since that first letter and the importance of reclaiming our bodies as a place of refuge. 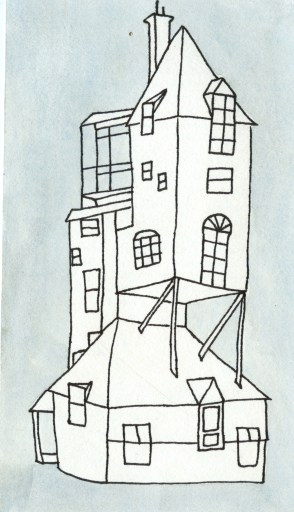 Illustration from the cover of “Portable Homes”

When you first began writing letters to your own body, what was the purpose?

Lexie Bean: [Living in Hungary] I was feeling uncertain of how to deal with all the things that were happening in my home and feeling uncertain of how could I find a safe space in an unfamiliar space. So I started writing letters to my body parts just as a way to check in on myself and to know that in writing to something, in a way [the recipient] writes back.

When I first started writing letters, I would have to do it in a space that had already felt safe to me inherently, like a warm room with a cat, ideally. But as I started writing these letters more, I found myself no longer needing to be in those specific spaces and finding myself checking in in places I wouldn’t normally consider safe. That was a big realization for me, that I could start to find a safe space within my own body and with other people’s bodies.

Why does the new book focus on survivors of domestic violence?

LB: Because they’re often not made important, and they’re often not made valid or worthy of taking up space. I guess it’s mostly speaking through my own experience and through my experience working for a hotline for five years, or being close with other survivors, but I don’t think the stories are often made important. You know, [people will say] “This happened five years ago, why are you still feeling this way?” Healing isn’t linear and it’s often perceived that it should be, and that in itself is very silencing.

I think the term “domestic violence” is really interesting, because when I first sent out an email about the letter drive, a lot of people were trying to gauge whether or not the word [“violence”] applies to them. The way that I see domestic violence is violence within a place that should feel close and safe … I think those questions in themselves were a reminder to me of why this project can be really important, because violence is the kind of hurt that’s normalized. In normalizing something, it makes it feel like it’s something deserved.

I put every letter that was sent in into the book. Of course, I asked everyone to fill out consent forms and all of that, but I think it’s kind of fucked to censor stories, so a lot of them aren’t grammatically correct, or have spelling errors, and I think that in itself shows how much these stories needed to come out.

Caroline Mills: On the grammar and spelling thing, these are people’s stories, and to change or alter or tell them that they need to be changed in any way, even if it is just to fit some standard of spelling or grammar or whatever, is to take away something that they put into it, which in a lot of cases is maybe a really difficult or empowering thing to do.

“Breathe slowly; I will never cover your mouth. My lifelines and un-brushed hair, my beautiful wrists and crisscrossed toes have all heard the news through your wavering breath.” — An excerpt from “Dear Bellybutton,” included in Portable Homes

What are common themes throughout all these letters? How do those themes differ from the first book?

On page 123 of the book there is this paragraph of the 100 most-used words that are in the letters in the book. “Heart” was one of the biggest ones, and “mind.” A lot of people wrote letters their heart or to their brain. A lot of these stories were more life full-body experiences but that was something that was integrated through the lens of one part.

How will the tour expand the purpose of the book?

LB: One of the most important things that came up within the interviews [for tour participants] was the idea that the tour is not a service trip. It’s not us going to other places saying we are going to change people’s lives or we’re going to do people a favor, but rather it’s sharing this idea of sharing space and knowing that within each stop that the people we engage with, it’s totally a mutual exchange and we’ll be healing from it too in our own ways.

What is the future of the project?

LB: We’re going to partner with this organization called For Book’s Sake, which is based in London in the UK. We’re going to go there in March to do a series of book events in collaboration with some centers, mostly in conjunction with International Women’s Day. Then after that we’re going to Hungary, where this project started. That’s so dear to me. We’re working in collaboration with this queer community organization that also acts as a library and community space. They do a lot of their work with queer people within Central and Eastern Europe, and also migrating communities and women. We’ll be there for a little bit, then after that, who knows? I’m not looking to do a large-scale version like this for a while.

You mentioned International Women’s Day and also queer communities, which seem to be two groups where it’s really important to claim your body and see it as a safe place because there are so many outside forces trying to compromise that. Was addressing that a goal going into it?

LB: Within Portable Homes there were a lot of queer people, which is great. It was mostly people who identify as women, but not fully, which is really important to make space for both male and trans communities who have experienced violence, because it goes in all directions.

Another big community that’s represented in the book is low-income communities, which is people who have limited access to resources that are tangible and physical, which really makes this project feel resonant within places where that’s a big issue of accessibility because the goal is finding a safe space within our bodies and other people, and within spaces where you can’t go to a transition home. 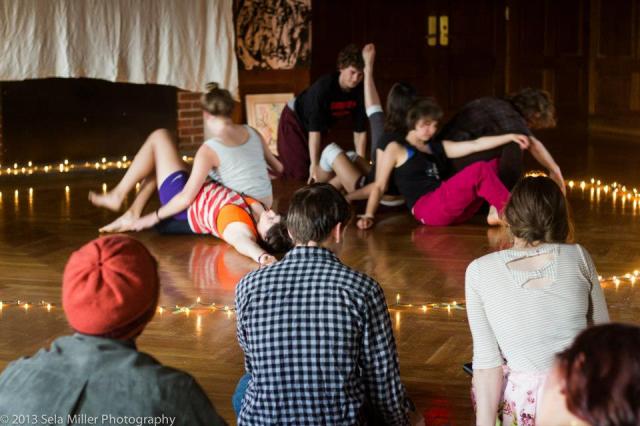 A performance in support of “Attention: People With Body Parts.” Photo by Sela Miller.

One of the last things I wanted to ask about was audience, because you’re asking people to talk about experiences that have been very difficult for them and open themselves up. Who do you imagine reading this book, and what are they supposed to get out of it, and then how is that supposed to affect the people that have participated?

LN: One of my favorite things in this book is one of the first pages, it’s called “An Introduction to Building a Home,” and it says, “This carries letters written from domestic violence survivors who wrote their body parts. We write to reclaim, to heal, to build homes from the parts and pieces that are ours. Do not be afraid to put this book down. Do not be afraid to pick this book up. This book is not heavy, but a release for those who have survived.” That has been something that is really important for me to keep in mind and something that I think speaks a lot to who the audience can be, but also how the audience should be. The audience is people who are willing to reach out and listen. And this book can also be a safe space or an inspiration or something that is empowering to someone who can see a part of themselves being represented in a way that is not usually seen.

“This carries letters written from domestic violence survivors who wrote their body parts. We write to reclaim, to heal, to build homes from the parts and pieces that are ours. Do not be afraid to put this book down. Do not be afraid to pick this book up. This book is not heavy, but a release for those who have survived.” — “An Introduction to Building a Home,” from Portable Homes

“Attention: People With Body Parts” can be found on Facebook and Tumblr. The 2012 anthology is available from Amazon. Portable Homes is available for purchase online today. Submit your own letter to the project at www.attnpeoplewithbodyparts.org.