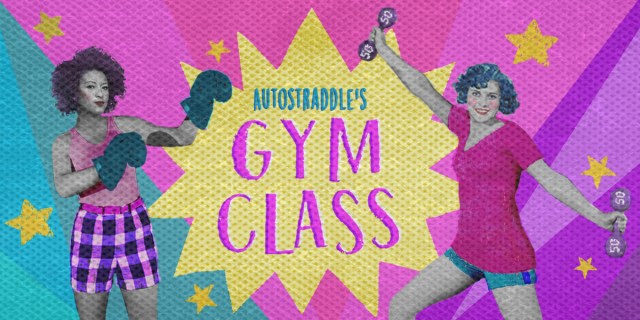 “I am not throwing away my shot. I am not throwing away my shot!” Are you at a Hamilton performance? No, you’re in the last 30 seconds of a championship basketball game, in possession of the ball, with one chance to shoot and break the tie to win! (Just typing that is making my palms sweaty.) But hit rewind—before you can make that winning shot, you have to practice the basics. Welcome to Gym Class, the basketball edition.

College women first played a modified version of basketball in the 1890s. Women’s basketball built popularity (and became more like the men’s game) over the next 80 years, and was introduced as an Olympic sport in 1976. The WNBA was founded in 1996 (coincidentally, the year I started high school and joined the basketball team … oof, it’s been a while!). Though sports franchises in general have not always been allies of our community, that’s starting to change—recently, the WNBA has been making an effort to reach out to LGBTQ+ folks and support important nonprofit organizations. One of the highlights of my first year in Seattle was attending WNBA games and cheering for the Storm, my new home team. So much talent on the court! So many queer people in the crowd! At a game benefitting Planned Parenthood, I wore my pink Tomboy Femme shirt in a sea of pink shirts and held my girlfriend’s hand and felt right at home. If you have the chance to go to an WNBA game, check it out and support the league. And if you’re interested in learning to play, this article will help you get started. Though the WNBA season takes place over the summer months, basketball is a winter sport on high school and NCAA calendars—so it gets a spot in the winter Gym Class lineup.

In the U.S., an NCAA women’s basketball game consists of four 10-minute quarters; recreational leagues may have a different game structure. Each team has five players on the court. Each half of the court is marked with the three-point line, the free-throw line, and the “paint” (the rectangle of space around the basket).

If you join a coached team, your coach will assign you to the position for which you’re best suited. If you want to join a non-coached recreational team, or develop your skills for a specific position before trying out, or simply feel prepared to drop in for a pickup game at your gym, the following list will help you choose a position or two based on your strengths.

ROLE: The team leader, in charge of calling plays and bringing the ball up the court. Can be a smaller, faster player. IMPORTANT SKILLS: Ball-handling, passing, reading the court to call appropriate plays.

ROLE: Similar to the point guard, with more of a focus on scoring. IMPORTANT SKILLS: Speed, ball-handling, shooting from the perimeter.

ROLE: The Jack-of-all-trades position, capable in every area with the ability to drive to the basket. IMPORTANT SKILLS: Ball-handling, shooting both inside and from the perimeter, defense, rebounding.

ROLE: This player focuses on aggressive offense and defense near the basket. IMPORTANT SKILLS: Rebounding, quick on defense, good shooting inside.

ROLE: Usually the tallest player on the team, with a focus on guarding the basket (defense) and making inside shots (offense). IMPORTANT SKILLS: Rebounding, blocking shots.

These skills will be useful no matter what position you play, but the different positions have different strengths. Refer to the previous list for suggestions on where to focus: guards ought to spend time on ball-handling skills, for instance, while power forwards and centers might devote extra practice to rebounding. There are tons of drills out there, so to get you started I’ve listed each skill set with one drill. Build on these with other drills that are relevant to you.

Stand with your feet shoulder-width apart. You can either square your body to the basket or stand slightly angled away; try both and see which gives you more control and range. Keep your eyes on the rim of the basket. Your legs provide a lot of power, so bend them as you prepare to shoot. With your palm under the ball (and your other hand at the side of the ball for balance), form an L-shape with your arm so your elbow is under the ball. Jump, extend your arm and snap your wrist forward as you release the ball. On the follow-through, keep your arm extended and your fingers pointed toward the basket. If you’re more of a visual learner, check out some of the shot-technique videos available online. Or review this step-by-step list of how to set up your shot, with accompanying photos.

Dribbling: The Maravich Series is a sequence of ball-handling and dribbling drills. A couple drills from the sequence are figure-8 dribbles (stand in a wide squat and practice dribbling the ball around your ankles in a figure-8) and single-leg dribbles (while standing in a lunge, dribbling in a circle around your front leg). Your focus should be on quick hands and getting used to controlling the ball while it’s in motion.

Inside shooting: Layup practice: Starting from the three-point line—at the top of the key and off to one side—dribble in for a layup, rebound, dribble out to the other side of the perimeter, come in for the layup, and repeat for several sets. This will help you practice both right-hand (coming in on the right of the rim) and left-hand (coming in on the left of the rim) layups.

Endurance: Good running conditioning will help you keep up with a fast-paced game. Add a 3- to 5-mile jog into your training schedule, at least twice a week.

Rebounding: To practice reacting quickly to a missed shot, have your partner take shots from around the court and be ready under the basket to rebound. Switch off so you each get a chance to rebound.

Passing: Practice these basic passes with a partner, standing farther and farther apart to increase difficulty. Chest pass (from your chest to theirs, no bounce); bounce pass (the ball should bounce one time between you, arriving at waist-height for the receiver).

Defense: The two primary types of defense in basketball are man-to-man (where you defend a specific player) and zone (where you defend an area and guard players who come into that area). To practice man-to-man defense, partner up and trade off on offense and defense. On offense, your goal is to get close enough to the basket to shoot; on defense, focus on quick feet, staying low (which allows you to move faster in any direction) with good balance, and staying between your opponent and the basket.

Inside shots under defensive pressure: Stand facing away from the basket (as if you just received a pass from the perimeter). With your partner guarding you closely from behind, practice different ways to get open for the shot: fake them out with a half-turn to the left, then pivot right and quickly shoot; or pivot and dribble around them; or half-turn but then step forward and a little farther out to take a jump shot; and so on.

There will be a lot more to learn once you join a team, especially involving the physical parts of the game (once you have teammates to practice with, you can work on contact-heavy skills like boxing out, tough defense and taking the charge). Here are some basic ball-handling rules to get you ready for your first practice. Breaking these rules is a violation, which results in your team losing possession of the ball.

She Shoots, She Scores!

I hope this Gym Class got you pumped to try out some dribbling drills or play HORSE at your local rec center. (Or at least revisit the Hamilton soundtrack? Dancing in the living room is good cardio.) As always, let me know if you have questions, and get in touch for a pickup game if you’re in the Seattle area!

Katrina has written 16 articles for us.