This essay was originally published in 2007 on my personal blog, This Girl Called Automatic Win.

In honor of tomorrow’s Season Four Premiere of The L Word, I’m posting an essay I wrote for my nerve intern application about two years ago. I tried to update it a little to reflect the unfortunate circumstance we know as “Season Three,” but then my eyes started to hurt. Hopefully it still makes sense.

I hadn’t seen anything like her before and I just couldn’t stop thinking about her. I also couldn’t believe it had taken me so long (ten actual months since the premiere on Showtime) to Netflix the first season of The L Word, which I had done on a whim so arbitrary that I can’t even remember what small shred of desire shaped that whim to begin with. But after that first week of compulsive viewing of the entire season, there was nothing whimsical about my all-consuming obsession with Shane “I don’t do relationships” McCutcheson, the androgynous sexy sinewy smoky-eyed woman who fucked with abandon and broke hearts like I break wine glasses.

I confessed to my roommate and viewing partner, Krista, that my burning desire for Shane, reflected by my new Shane-influenced fashion sense (vintage rock t-shirts and paper-thin sheathes of men’s wifebeaters, no bra, distressed jeans just barely hanging on bony hips), was ruining my relationship with my boyfriend (he liked me being mostly hetero and wearing yoga pants). Krista felt the same. Like teenage boys with Brooke Burke posters and Brittney Skye DVDs, we shunned the girls from our class and mourned the impenetrability of a fictional character, the sweet wet dream that is yearning for the non-existent. “You know what?” Krista asked me, staring wistfully the television screen, which was dutifully re-playing our favorite Shane-Cherie sex scene–“I haven’t felt this way about someone since Jordan Catalano.”

Like all daughters raised by feminists in the “Free to be You and Me” generation, Krista and I had never plastered our teenage bedrooms with glossy Kirk Cameron posters from Tiger Beat. My first star-crush, I believe, was for the Hard Day’s Night– era Paul McCartney. Star crushes were for lonely teenagers in square-shaped states who’s parents subscribed to TV Guide and still had the Friends finale on VHS. We were above all that, so when someone manages to penetrate our countercultural hearts, even now, in our mid-twenties, they hit us hard. Over the years, only a few men and women have emerged from the airbrushed pack to assert themselves as Worthy.

These are characters with on relatively well-written shows or movies, though they were often too mysterious to speak many lines, well written or otherwise, themselves. Characters who to us, seemed real enough that the unavoidable fact of their non-existence was nothing short of heartbreaking.

We want to make love to these characters. We want to slide underneath their smoky exteriors and watch them sleep. We want to extract tales of their troubled childhoods like organs, and then dress ourselves in them. We want to strut down the hallways of our mind-numbing public high school or through the catty girl-clubs of West Hollywood with people so potent that you get wet just looking at them. Or, as Rickie from My So-Called Life (the vehicle for aforementioned Jordan Catalano) would say: “You’re so beautiful, it hurts to look at you.”

What Jordan Catalano had, and what Shane has, is casual sex appeal. It is possible to theorize that Shane is a grown-up Jordan, and Jordan is a budding Shane, but no one could possibly claim that, at the age of their capture, the two have similar personalities. Their only similarity—which cements their mutual ability to sneak into our conscious and unconscious dream-life—is not simply being good-looking, but being the right kind of aloof.

We never questioned 15-year-old Angela Chase’s (Claire Danes) attraction to Jordan, though they had never spoken and, as was often pointed out to Angela, he couldn’t even read (How beautiful and damaged! How much we could help!). Carmen delivers a snarky glance to Shane after declaring that she would sleep with a Republican because: “Stupid, Shane, can also be sexy.”

But Shane and Jordan are both products of neglectful or absent parents and have experienced a relative amount of formative damage and, as such, are completely self-sufficient, if uneducated and possibly poor. They have skills—Jordan fixes cars, Shane fixes dyke-mullets—and skills, it seems, can also be sexy.

Most Americans work too much and are constantly on the verge of a heart/anxiety attack, which is not exactly sexy–the second shifting women and ladder-climbing men of our social climate have bodies that grow slack from the sedentary lifestyle of car seats and cubicles and libidos that find easier release during the morning shower than in pursuit or seduction or that old feeling we called Tenderness. Relationships either function immediately or are discarded, like so much extra baggage. We love Shane because she doesn’t give a shit and she’s never in a hurry. We love her because she breathes, visibly. Jordan breathes, too. They breathe. Breathing is sexy. It was hot then, and it’s hot now, too. Angela overanalyzes things until “they barely even exist,” and Jordan doesn’t think that much about anything.

We want to sit with them, and breathe. We want to inhale calm, and then be fucked by it, passionately, the kind of passion that seems to be reserved by artists, nomads and Buddhists. While everyone else is resume-building, Shane and Jordan are fucking. And they aren’t about to apologize for their shoddy resumes, either.

Jordan tells Angela: “See, I have this philosophy…So my feeling is, whatever happens, happens.” Shane tells Carmen: “I don’t have a plan. That’s the point.” When confronted by potential lovers, they take the “I’m too relaxed to care about your feelings” route, carefully constructing a wall that becomes more and more alluring the more impenetrable it seems to be.

Furthermore, we know that when they do fall, they fall hard. In Season One, Shane falls for Hollywood socialite Cherrie Jaffee and is quickly burned when Cherie’s husband uncovers their affair and forbids them to see each other. Shane protests: “You know..my entire life, people have said that I would become a psychopath if I didn’t learn how to feel. But I wanna know, Cherie, what the fuck is so great about feeling? Because I finally let myself. And I feel like my heart’s been completely ripped out.” In living rooms across America, lustfilled lesbians collectively sigh—if Shane loved us, we would love her back, and we would do it right! Because ultimately, Cherie rejects Shane’s heart and the aura that attracted her (and us) to Shane in favor of her socialite lifestyle. Cherie tells Shane that their emotional love doesn’t have a fighting chance against her charity balls and East Hampton beach houses: “In this fucking ugly
world, that kind of love does not exist.”

In Season Two, Shane’s steely heart faces a new challenge. Carmen. The two share some steamy sex scenes but eventually, Carmen loses her patience for Shane’s emotional distance and starts dating her roommate, Jenny—thus leaving the allegedly free-spirit to do drugs, drink a lot, start fights, fuck dumb-looking girls and cry to herself. Carmen is utterly likeable, honest, approachable and beautiful. When Season Three begins, they are a seemingly functional couple, until a now-divorced Cherie books an appointment at Shane’s hair salon and later tears off Shane’s clothing by her private pool. Shane fucks her with a strap on. It’s more or less the hottest thing that happens all season.

Shane and Carmen argue over this for a few episodes, but after Dana’s death, Shane pulls a Brian Kinney and proposes marriage during the gang’s trek in the woods to spread Dana’s ashes. Lest we believe that Shane could ever really abandon those roots that colonized her figure into our libido, she stands Carmen up at the altar.

Jordan’s realization that he has fallen for Angela is equally touching; we love a good wall-crashing, especially when it’s our protagonist with the anvil. Jordan’s story was stopped at the end of MSCL’s brief television run, just after he discovered: “It’s like you think you’re safe or something, ‘cause you can just walk away, any time, because you don’t like, need her. You don’t need anyone. But the thing you didn’t realize is, you’re wrong.”

Jordan made the mistake of sleeping with Rayanne, which made him realize how much he loved Angela. Sound familiar?

In the second season of our minds, many placed Angela with the deserving Brian Krakow (played by Devon Gummersall, who later resurfaced on The L Word as a “lesbian-identified male”). A majority of watchers, myself and Krista included, just couldn’t break up with Jordan. 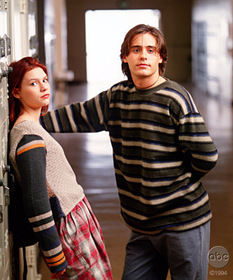 “Have you ever noticed that every time Shane walks into a room, someone leaves crying?” Bette (Jennifer Beals) asks in the pilot episode of The L Word. In the My So-Called Life pilot, Angela moans to her best friend: “I just like how he’s always leaning. Against stuff. He leans great. Well, [I’d like] either sex or a conversation. Ideally both.”

Ultimately, Jordan looked really good, with his touchable hair and classic baby-blue eyes, and his Cobain-esque flannels draped a absolutely fuckable bod. And Shane, with her scrawny strut, pouty lips and rock-star wardrobe, is relentlessly attractive. In fact, with Jared Leto’s latest reincarnation as an emo-pop-punk rock star, the two actors are virtually identical.

Jordan left us before his murky character could ever be fleshed out, but Shane was renewed. And as long as The L Word is on, we will continue to yearn for her like the adolescents who dreamt of Jordan Catalano, dream of a love with a lanky lady who is so beautiful, it hurts to look at her. And, for just a moment, we’ll breathe.