A friend once volunteered her impression of Boston’s Jamaica Plain: “You always hear it is the lesbian neighborhood,” she said. “But when I get off the train with my partner it isn’t like anyone is standing there holding a welcome sign.” She described a neighborhood in which LBQ residents (lesbian, bisexual and queer women and their transgender and genderqueer friends, partners, and neighbors) are plentiful, and yet hard to find.

Her words are familiar. They echo the sentiments of residents of two of four cities I studied for my book, How Places Make Us: Novel LBQ Identities in Four Small Cities. Take Ellen, a white, middle-aged attorney who lives in Ithaca, NY. Before moving, she had an idyllic image of what life would be like in Ithaca: “It was like a little image of you go in, you check in, [and they say] ‘lesbian 49 million has arrived.'” However, now that Ellen lives in Ithaca she wonders where all of the lesbians might be. Referring to LBQ tennis players, she said, “What is up with my sisters? Where are you people?” Like many Ithaca informants, she frequently notices LBQ residents, but Ellen can’t predict when or where this will happen. She isn’t certain how to find someone to date, or even to play tennis with. 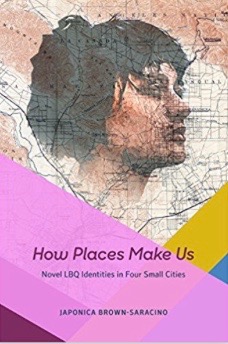 My book, which draws on my ethnography of four small U.S. cities with growing or emerging populations of LBQ individuals — Ithaca, NY; San Luis Obispo, CA; Portland, ME; and Greenfield, MA — reveals that Ellen’s experience is common. However, crucially, the book also suggests that it isn’t universal. Many LBQ individuals — from recent college graduates to retirees — whom I encountered in the four cities are, like Ellen, white, highly educated professionals, and the cities themselves are similar (i.e., progressive cities with lots of natural amenities, a college or university, and unusually high proportions of lesbian couple households; I chose four similar cities to study because, initially, I had expected to study the role of LBQ residents in gentrification). However, I found that in each LBQ residents nevertheless create very distinct social worlds; if Ellen is searching for lesbian tennis players, a similar woman in another city is tripping over them.

Why is this? My fieldwork reveals that sexual identities are place-specific. That is, each city possesses a novel “sexual identity culture” or place-specific ways of thinking about and “doing” sexuality. In Portland, Maine, hyphenated identities like queer-punk and polyamorous-high-femme proliferate. In San Luis Obispo, California, most identify as “lesbian.” In Ithaca, many present themselves as post-identity politics, and do not rely on sexual identity labels. Finally, in Greenfield, MA longtime residents identify as lesbian feminists who live in an outpost of Northampton, while LBQ newcomers embrace post-identity politics.

What do place-specific identities have to do with the absence of welcome signs that Ellen and my friend gesture to? Just as identities are place-specific, so too are ways of building and sustaining (or not) LBQ community. Specifically, LBQ residents forge ties with heterosexuals in cities in which they experience high levels of acceptance and reliably encounter other LBQ residents, and where city-wide place narratives celebrate inclusivity (e.g., the mantra that Ithaca is “Ten Square Miles Surrounded by Reality”). This, in turn, cultivates the sense that sexuality is not a defining personal trait. “I like to think of myself just as a person,” a middle-aged small business owner in Greenfield told me. Another said that being identified by her partner’s gender “makes about as much sense to me” as being grouped “because we both drive red cars.”

In Greenfield, as in Ithaca, the presence of LBQ residents is unmistakable. They are at the co-op, serving tables, swimming at the YMCA, and shuttling children to school. And yet, during fieldwork I almost always found LBQ residents socializing with heterosexuals with whom they shared a profession, politics, or children of the same age. In fact, one white, professional woman told me, “I don’t even think about that [whether or not friends are straight].”

Conversely, LBQ residents of Portland and San Luis Obispo feel less accepted, describe a smaller LBQ population, and absorb place narratives that don’t emphasize acceptance. In turn, opportunities for LBQ communion are almost everywhere. In Portland, I could be certain to encounter LBQ residents socializing in the (now defunct) coffee shop and performance space, the North Star. Lesbian professionals grabbed morning coffee; twenty-something queer-punks lunched with trans men; butch and femme couples attended shows in the evenings. Crucially, more often than not these LBQ residents talked, flirted, ran, surfed, and drank with one another. Beyond the North Star, they relied on a group for butch individuals, the Dyke March committee, drag king troupes, and dyke night at a gay bar. More informally, they described “Queer Family Christmas” and a weekly supper where dykes, genderqueer, and transgender residents talked queer theory. In other words, in Portland there seemed to be endless opportunities for engagement with LBQ residents.

For its part, San Luis Obispo, California lacks a North Star, and yet opportunities for interaction were abundant. Lesbians gathered for hikes, bonfires, dances, and dessert hours. In this context, the welcome sign my Boston friend yearned for was on ready display. When a newcomer wrote to a lesbian listserv with questions about relocation she was inundated with messages; women told her of rooms for rent, offered to loan trucks, and invited her to parties. Some helped to carry her boxes.

Why was this the case? Why would San Luis lesbians jump to aid a stranger, and why do LBQ residents of Portland surround themselves with one another? The origins of this pattern are best described by a Greenfield resident who reflected that on living in another (bigger) city, she turned to other LBQ individuals “for safety and support. Because I had to. And I don’t have to do that [in Greenfield].” In contrast, in San Luis Obispo and Portland, residents feel that if LBQ residents don’t carry boxes, no one else will; even in coastal, progressive cities there is safety and comfort in numbers.

This is, of course, somewhat counterintuitive. We expect welcome signs in high profile LBQ enclaves where residents feel free to proudly proclaim sexual difference, and where at least some have moved to live around others like them. We especially expect this of big city “gayborhoods” and their LBQ equivalents. Instead, we are more likely to find visible and accessible LBQ public life in places that are a bit off the map; places in which feelings of abundance and acceptance are less prominent, and in which residents celebrate place attributes unrelated to safety, acceptance, or sexual difference.

The variety of ways of socializing and establishing ties that I found in four similar cities trouble recent claims about the demise of LBQ community; that is, it challenges the increasingly familiar claim that LGBTQI individuals don’t seek one another’s company anymore. Instead, my fieldwork reveals that LBQ community life is vivid and reliable, at least in places where residents feel it has to be.

Author’s note: All names have been changed to protect the identities of informants.

Japonica Brown-Saracino is Associate Professor of Sociology at Boston University. A graduate of Smith College (A.B.) and Northwestern University (Ph.D), she is the author of A Neighborhood That Never Changes: Gentrification, Social Preservation, and the Search for Authenticity (University of Chicago Press, 2009), which received the Urban Affairs Association Best Book Award, and editor of the Gentrification Debates (Routledge, 2010). Her articles on sexualities and place have appeared in journals such as, Sexualities, American Journal of Sociology, Social Problems, and Qualitative Sociology. She lives in Boston's Jamaica Plain neighborhood.

Japonica has written 1 article for us.