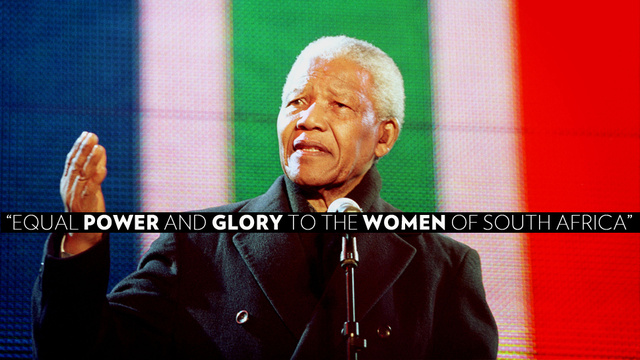 In 1993, as Mandela was rising in South African politics, South Africa signed on to the UN’s Convention to End All Forms of Discrimination Against Women (CEDAW), essentially a pact to eliminate all forms of discrimination against women (a Women’s Bill of Rights), if you will. In 1995, a year after Mandela won the Presidential election, South Africa ratified it. Know what country hasn’t ratified the CEDAW yet? The United States of America.

But that’s not all. Mandela was key in promoting the adoption of the Constitution of the Republic of South Africa in 1997, which contained passages guaranteeing gender equality and prohibiting sexual discrimination.

The state may not unfairly discriminate directly or indirectly against anyone on one or more grounds, including race, gender, sex, pregnancy, marital status, ethnic or social origin, colour, sexual orientation, age, disability religion conscience, belief, culture, language and birth.

Everyone has the right to bodily and psychological integrity, which includes the right: to make decisions concerning reproduction; to security in and control over their body.

During his presidency, Mandela enacted free health care for children up to age six, and free pre and postnatal care to mothers who utilized public health. He frequently spoke out against rape and sexual abuse of women, and rejected the idea that the problems of sexual abuse and exploitation were for women to solve. This isn’t to say that South Africa is a perfect utopian playground for women — a fact that Mandela acknowledged many times — but that a journey toward equality must begin with intention and continue with a united citizenry working together against injustice.

Here are some excerpts from a 1996 Women’s Day speech Mandela used to call for more women in the South African government, an end to sexual violence, and honored the women who joined in the anti-apartheid fight.

The presence of so many women from so many parts of our land underlines the weight of the pledge for women of South Africa to join hands with government for Unity, Peace and Development.

That is a daunting task. The legacy of oppression weighs heavily on women. As long as women are bound by poverty and as long as they are looked down upon, human rights will lack substance. As long as outmoded ways of thinking prevent women from making a meaningful contribution to society, progress will be slow. As long as the nation refuses to acknowledge the equal role of more than half of itself, it is doomed to failure. […]

Forty years ago, a legion of brave and determined women dared to throw down the gauntlet at the seat of apartheid power. We honour these veterans. Indeed, the fact that we do not yet have a monument in these environs to acknowledge them is a challenge that we face, as we plan to honour the victims and heroes of our history of struggle. Their inspiring example challenges us all to work together to realise their noble ideals and build a truly non-sexist society.

Let us join hands, in response to the call of the women, for Unity, Peace and Development. Let us enter the new century with concrete results to measure our beautiful words.

Equal power and glory to the Women of South Africa!