As we were already pretty certain of yesterday, Judge Ware has ruled that Judge Walker’s decision on Prop 8 is valid despite the fact that Judge Walker, like all other humans, has a sexual orientation. The full court decision can be read here; while it can’t compare to the pure poetry of Judge Walker’s original 138-page decision, but there are a few gems. Most notably, this paragraph here:

After considering the Oppositions to the Motion and the governing law, as discussed below, the Court finds that neither recusal nor disqualification was required based on the asserted grounds. The sole fact that a federal judge shares the same circumstances or personal characteristics with other members of the general public, and that the judge could be affected by the outcome of a proceeding in the same way that other members of the general public would be affected, is not a basis for either recusal or disqualification under Section 455(b)(4). Further, under Section 455(a), it is not reasonable to presume that a judge is incapable of making an impartial decision about the constitutionality of a law, solely because, as a citizen, the judge could be affected by the proceedings. Accordingly, the Motion to Vacate Judgment on the sole ground of Judge Walker’s same-sex relationship is DENIED. 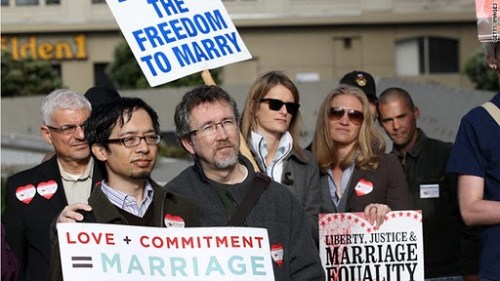 In a lot of ways, it seems like a reboot of the original Prop 8 trial: the exact same deeply incompetent lawyer, Charles Cooper, and a patient but wearying judge who has to sit through the same arguments repeated over and over no matter how many times they’re shown to be groundless. A great deal of the back-and-forth can be read at Prop 8 Trial Tracker, although unfortunately it isn’t quite the laugh-a-minute thrillfest that the original trial was – reading this feels more like watching a remote-control car run into the wall again and again until its battery runs out. An example:

Judge Ware: What is the fact you rely upon that Judge Walker was in a relationship for purposes of marriage?

Charles Cooper:  The fact that he has publicly announced that he is and has been in a relationship with another person?

W: So if you are in a ten year relationship with another person, that is for purposes of marriage?

W: You would concede that you could be in a long term relationship without being in it for purposes of marriage?

W:  What distinguishes it?

C:  The very fact that two individuals are in kind of relationship Walker has…

W: What distinguishes between two?

C: There are platonic friendships that do not lead to marriage. [laughter]

W:  What do you mean platonic?

There’s plenty more where that came from!

An unavoidable fact of this hearing on, more or less, whether or not minority groups are able to respond reasonably to issues that affect minority 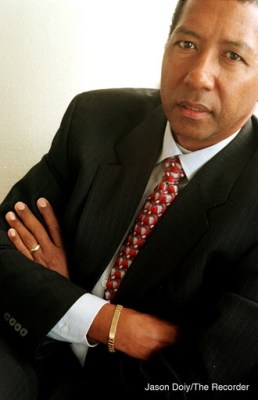 groups, was that the judge presiding over it does in fact belong to a racial minority. Although this case doesn’t boil down to a comparison of the experiences of racial and sexual orientation minorities, it does throw the real facts of this case into relief. Judge Ware has worked hard to get to his position, the exact same position that Judge Walker previously held; he’s earned the power to make this decision with an impressive previous career. Although we can’t know for sure, it’s extremely likely that he’s worked even harder than a white person in his position would have, because as a black man he almost certainly had to face obstacles and prejudices that a white person wouldn’t. To try to tell him in a court of law that he might be somehow unqualified to judge on issues of, say, racial discrimination or civil rights, because his experiences have somehow made him less and not more able to understand and therefore make judgments about those issues, seems pretty pointless. And it was.

A slightly more interesting aspect of the story is that of the tapes made of the original Prop 8 trial. As you may recall, the trial was originally meant to be broadcast on national television, an amazing opportunity that would have allowed people all over the country to learn the real facts of Prop 8 and the hugely inappropriate assertions of the Protect Marriage campaign. The broadcast was ultimately prohibited, but tapes from the original trial still exist. Tapes that include the almost innumerable blunders of Yes on 8 witnesses, along with a lot of very powerful testimony from our side and a lot of deeply unimpressive testimony from Protect Marriage. The tapes are now under seal and protective order, and can’t be released to the public, but can still be reviewed by people involved with the case. Charles Cooper apparently wanted these tapes to be off limits for even those purposes – so they can’t be reviewed by lawyers involved? So they can’t be reviewed by Walker himself? So they can only be reviewed by Walker? To be perfectly honest, after all the coverage of the hearing, I still have no idea what Cooper was going for here, and am comforted only in that Ware doesn’t seem to either.

Cooper: Yes. Court’s amendment to assurances were consistent with court rules on videos. Plaintiffs under protective order.  We did not prevent.

Ware:  Any authority that judge is subject to protective order?

Cooper: No. We haven’t voiced that consideration.

Ware: Sounds like an argument as to whether Walker made a mistake by displaying videos publicly. No such motion. If there were, I would want Walker present. Why are you doing this?

Cooper:  Not sure what you mean by “mistake.” We say Walker’s use was a mistake and contrary to rules.

Ware: What relief you seek from me?

Cooper:  Seeking that court as custodian of record of case esp. that which is sealed ordered that all persons return them to the court including Walker.

Ware:  You want me to order all parties to return to court and not to allow further use even on appeal?

Cooper:  Our view is different for plaintiffs.

Ware:  That’s a no.  I don’t understand the protective order to preclude use by parties.

Now that we can agree that no one, possibly not even Cooper, understands what was being asked for with regard to these tapes, we can move on to the fact that this motion was denied. Does this mean that the tapes of David Blankenhorn yelling belligerently on the stand when it was revealed he had no peer-reviewed research background, or Kenneth Miller’s floundering when asked basic questions about his “field of expertise,” or William Tam’s claiming that gay people are “12 times more likely to molest children,” will be available in living color for further ‘review’ when this case eventually goes to the Supreme Court? This is unclear. It probably won’t, because that would make me happy.

But in any case: We Won A Thing. Specifically, we won a thing that helps ensure no one is going to go back in time and try to have us un-win the important thing we already won. And it’s comforting to know that Judge Ware is keeping the tradition of dry, self-aware judicial humor alive and well in the U.S. District Court for the Northern District of California.

Judge Ware was the person who first gave Judge Walker a copy of the trial recordings at a retirement/ passing of the gavel ceremony.  Ware asks Cooper if he should recuse himself? There’s an audible laugh from the gallery. “I don’t need an answer now,”