During the first week of March, Michigan watched a two-week trial meant to decide whether the state would continue to uphold its ban against same-sex marriage. Today, Judge Bernard Friedman declared the ban unconstitutional. There’s been no stay of the ruling (like the one that kept California’s couples from marrying after Prop 8 was repealed) officially issued, although Michigan Attorney General Bill Schuette has filed an emergency request for one.

The lawsuit against the state was brought by April DeBoer and Jayne Rowse, who were driven to sue because without marriage, they can’t both adopt their children. The prospect of repealing the ban is a controversial one; the trial saw Michiganders traveling from across the state to protest outside the courthouse both in support of and in opposition to the same-sex marriage ban. The ban dates back to 2004, when voters passed a ballot measure restricting marriage to one man and one woman, and includes language that specifically includes civil unions. The ban was put on the ballot not by a legislator, by a successful petition by conservative citizens; 2.7 million people voted to pass the ban.

While same-sex marriage victories have been multiplying across the US, from Utah to Kentucky. Increasingly, we’re seeing at least some steps forward in states usually considered conservative, or ideologically committed to “traditional marriage.” While Michigan may not seem as unlikely a marriage equality success story as some states more widely understood to be conservative, its relationship to LGBT equality is more complicated than those outside the state may assume. Michigan voted Democratic in the year 2004, the same year that it passed the same-sex marriage ban; Kerry won the state by a 3.4% margin. More recently, it was arguably a swing state in 2012, but ultimately went for Obama with a margin of 9.5%. But while Democrats have managed wins in Michigan recently, that’s far from meaning that Michigan is a particularly liberal state, or that it’s necessarily socially progressive. In fact, the majority of counties in Michigan supported Romney in 2012: 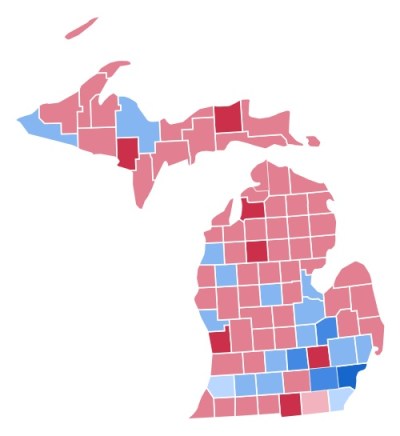 Although it doesn’t always have the same anti-gay rap as states to the South, Michigan is a fairly consistently unwelcoming place for its LGBTQ residents. In 2011, the state attempted to pass a bill that would prohibit ordinances extending discrimination protections to LGBT people in 18 cities. It succeeded in passing a bill that retracted health benefits from the same-sex domestic partners of municipal employees. It’s still perfectly legal in Michigan to fire someone based on their sexual orientation or gender identity/presentation. In 2012, LGBT community leaders of Michigan launched a 100-day hunger strike to draw attention to their treatment by their state government, calling Michigan an “extreme anti-equality environment.” David Garcia, executive director of Affirmations, said that “One could argue that Michigan is the Mississippi of the civil rights movement when it comes to gay equality. We are constantly behind on many issues, and many people don’t know it.”

As marriage victories have multiplied, they’ve been followed by increasingly vocal reminders that the LGBT community has other (and for many people, more critical) issues to contend with: disproportionate levels of poverty, substance abuse, incarceration, poor access to healthcare, and more. In Michigan, the contrast between the focus on marriage equality and issues of employment and economic discrimination is a telling one. Although polls indicate that support for same-sex marriage is higher than ever, Michigan raises the question of whether support for same-sex marriage is the same as support for the people in those marriages. While the repeal of the ban is excellent news, and will hopefully lead to many families like DeBoer and Rowse’s experiencing increased stability and security, it’s important to remember that marriage isn’t the whole battle; many LGBT people in Michigan still face imposing challenges, and the solutions for those aren’t necessarily in sight.