Illinois has become the latest state to legalize marriage equality, after a surprise house of representatives vote Tuesday afternoon passed Senate Bill 10 with a vote of 61 for, 54 against and two present. Within an hour, the state senate had confirmed the vote 31-21. 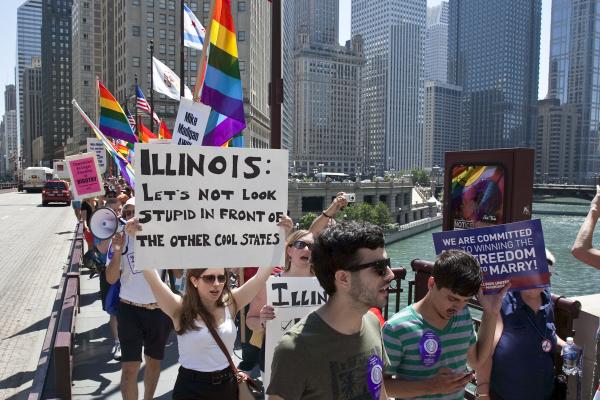 The Illinois Senate passed the Religious Freedom and Marriage Fairness Act in February, but the House of Representatives failed to bring the issue for a vote before the end of the regular session. The fall veto session renewed hope for the bill, although optimism waned as backers struggled to gain support among representatives. Tuesday morning, however, insiders confirmed that representatives were nearing the 60 votes needed to pass the bill, thanks in part to big backers like House Speaker Michael Madigan, a Democrat from Chicago. Debate on the bill opened around 1 p.m., when chief sponsor State Rep. Greg Harris explained to his fellow representatives what he hoped to accomplish with its passing:

“What same-sex couples in Illinois want for their families is just what you want for your families. They want to work hard and be successful. They want to volunteer at their school, their church, their synagogue. … They want the freedom to protect the ones they love through the security of marriage.”

Governor Pat Quinn has indicated he will sign the bill into law and tweeted his support of the legislative action. A late amendment allowing it to pass with only 60 votes instead of the usual 71 dictates the law will go into effect on June 1, 2014, instead of after the usual 30-day waiting period.

When Illinois was last considering marriage equality, it would have been the tenth state to pass such a law. Six months later, it is the fifteenth. As an Illinois resident, I can finally be proud that it is not the fiftieth.