I’ve been a steadfast and high-key booster of Take My Wife for approximately one year and I hope, I hope so much, that my words made the kind of impression that words make on people wherein after hearing the words, they go ahead and do the thing that the words told them to do. In this case, the thing was to watch Take My Wife. I’m going to trust that you did, indeed, watch Take My Wife, or at least added it to your queue after we ranked it #2 on our list of the most critically acclaimed queerish shows streaming on Netflix/Amazon, and therefore will be specifically invested in the show’s future, which you may have heard is currently in jeopardy because Seeso is shutting down.

Seeso, a comedy-focused “channel” available as a $3.99/month add-on for Amazon Prime users, announced its departure from this scorched earth last week. Several Seeso Originals have been picked up by VRV, a surely competent streaming service I have never heard of, but Take My Wife is not one of them, because of the patriarchy. This sucks, because Take My Wife is unprecedented in so many ways, and one of them is Rhea and Cameron’s commitment to diversity and LGBTQ+ inclusion behind and in front of the camera. 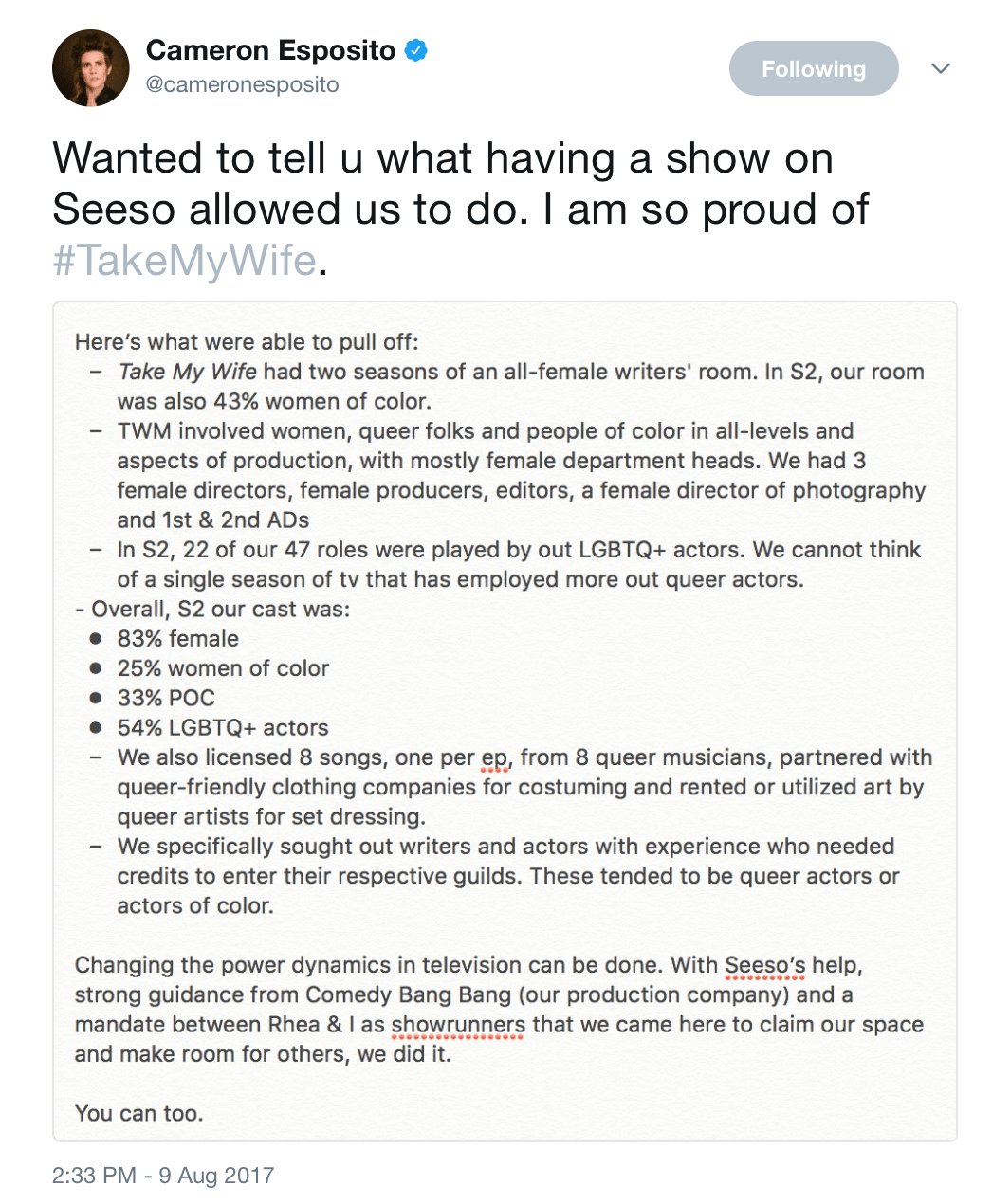 When announcing its death, Seeso had this to say about its not-yet-picked up original programming: “We’ll let you know as soon as we have further information, including where to find the exciting project There’s….Johnny! and other Seeso Originals in the future.”

Since then, there has been no word on the future of Take My Wife. But there have been a lot of humans advocating for Take My Wife to have a future, calling on platforms like Hulu, Netflix or Amazon to pick it up. If we had the money to create a video streaming channel and pick up this show, we would pick up this show in a hot second. The reason we don’t have the money is because somebody else has the money. So, you out there with the money: PICK UP THIS DAMN SHOW!

The campaign to save Take My Wife has gathered steam like a rolling stone gathers moss or whatever: it’s been written up in Entertainment Weekly, Vanity Fair, Logo, Unicorn Booty,, Indiewire and Upworthy, among others. The #TakeMyWife hashtag has attracted devastatingly ambitious twitter users such as Rebecca Sugar, Alice Wetterlund, Tegan & Sara, Gaby Dunn and, of course, me. 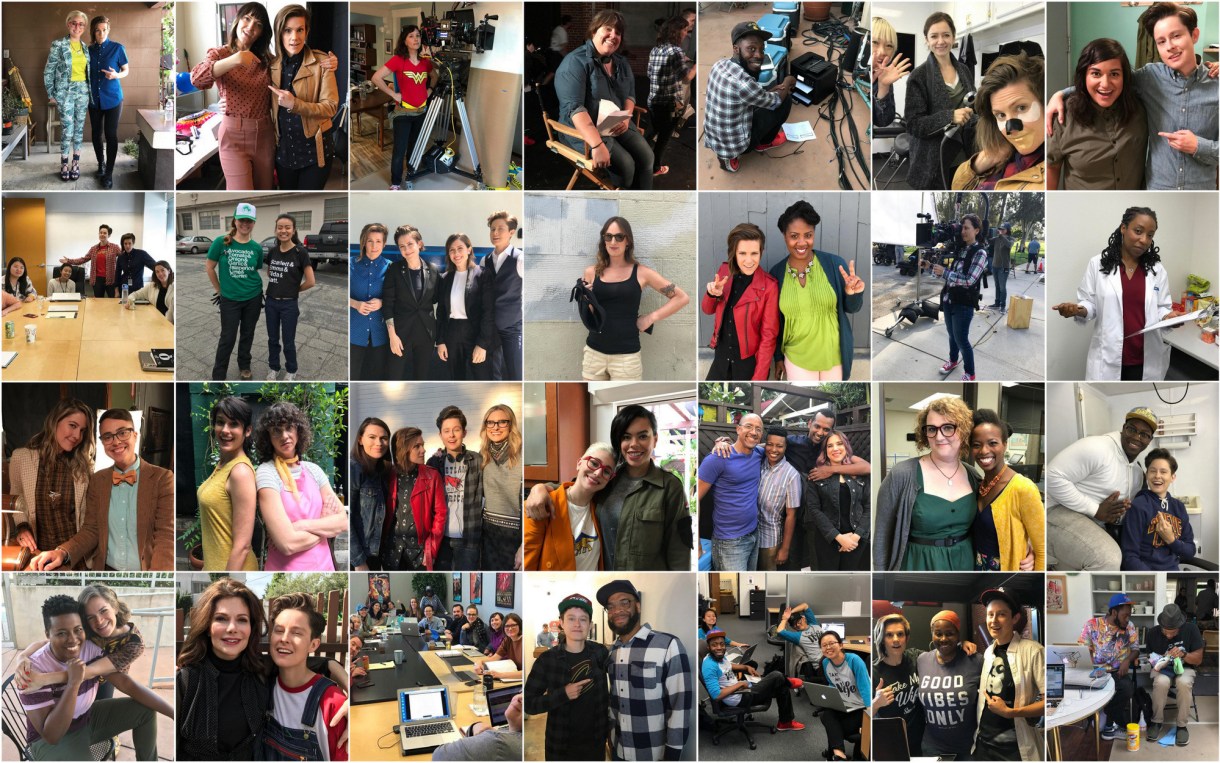 Scenes from the filming of Season Two, via Cameron Esposito and Rhea Butcher on Instagram

“It happened to me: I thought Take My Wife would be like a bad webseries but it’s not,” said a friend last week when she finally watched Take My Wife, which I’ve been telling her to watch for, as aforementioned, nearly a year. She really liked it a lot. Guess who else likes it and wants more of it? Other people who work here. 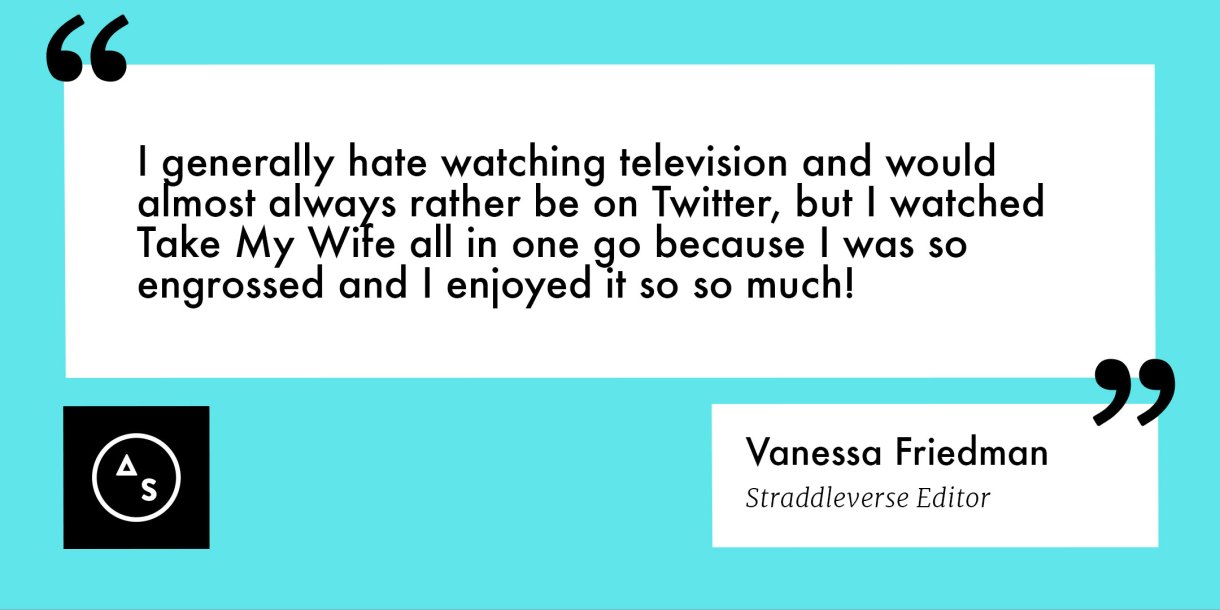 “I generally hate watching television because I have quite a short attention span. I inevitably get enraged or disappointed by some stupid racist/sexist/homophobic plot point or character (un)development, and would almost always rather be on Twitter, but I watched Take My Wife all in one go because I was so engrossed and I enjoyed it so so much! It’s hilarious and the fact that it was so clearly created and produced by queer women made me feel ~ seen ~ in a way I never ever feel while consuming television media. Also Rhea is so hot plz someone keep her on our teevees.” 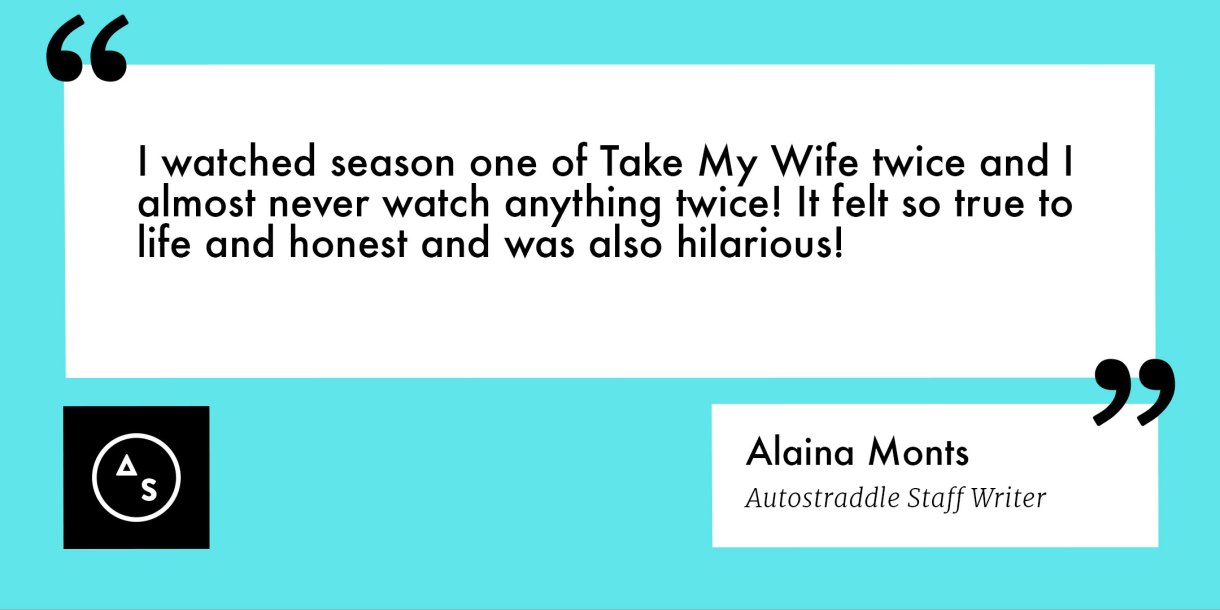 “I watched season one of Take My Wife twice and I almost never watch anything twice! It felt so true to life and honest and was also hilarious! Also I agree with Vanessa that Rhea is hot and would like to add that she is hilarious and I don’t understand how/why she’s not super famous yet.” 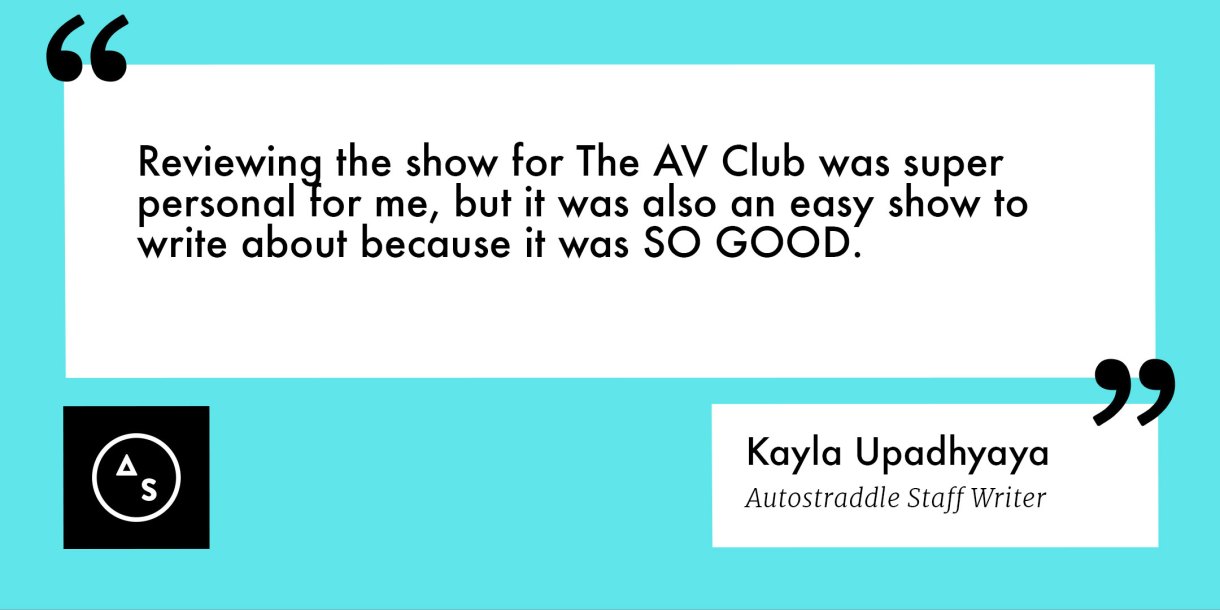 “I reviewed Take My Wife for AV Club when it first came out, and out of the literal HUNDREDS of reviews I’ve written for AVC, it was the first (and only!) show centered on two queer protagonists that I got to review. Reviewing the show was super personal for me, but it was also an easy show to write about because it was SO GOOD. Not only is the comedy really great, but the conflicts are also super well written, especially some of the relationship drama experienced by the central couple. Overall, it breathes authenticity. Rhea’s arc in the first season resonates with me so much. IT HAS TO COME BACK I’M GONNA GO REWATCH SEASON 1 FOR THE FOURTH TIME.” 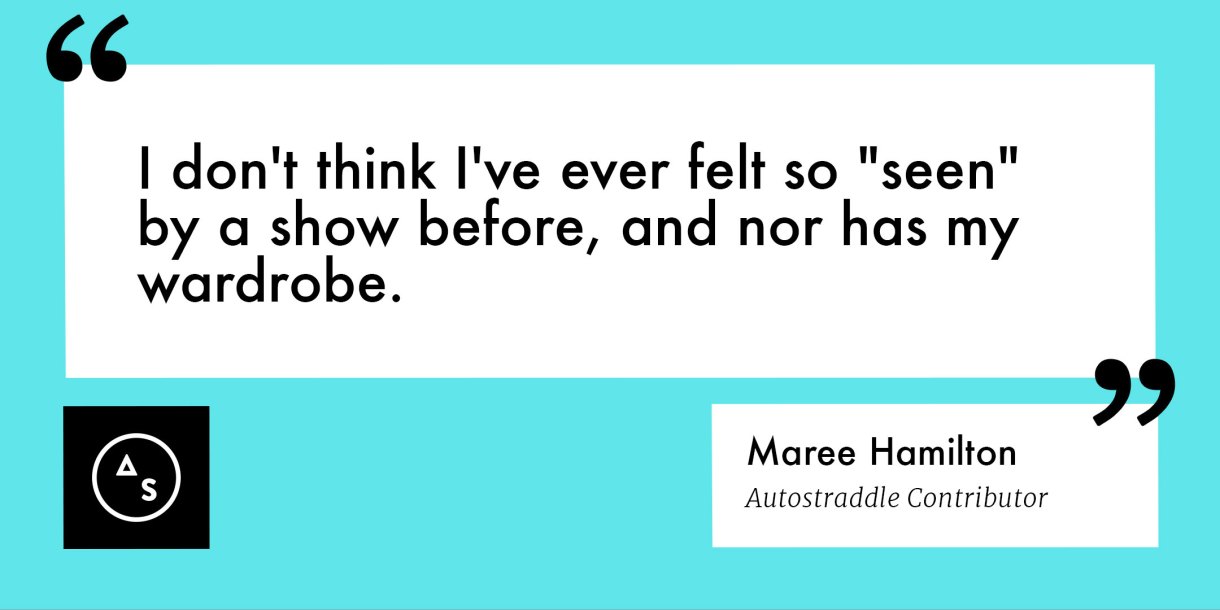 “Take My Wife took my heart and if i had a wife it would have taken her too. I don’t think I’ve ever felt so “seen” by a show before, and nor has my wardrobe. I do not want to live in a world where I don’t get to see Cameron and Rhea get married, or the entire second season, truly.” 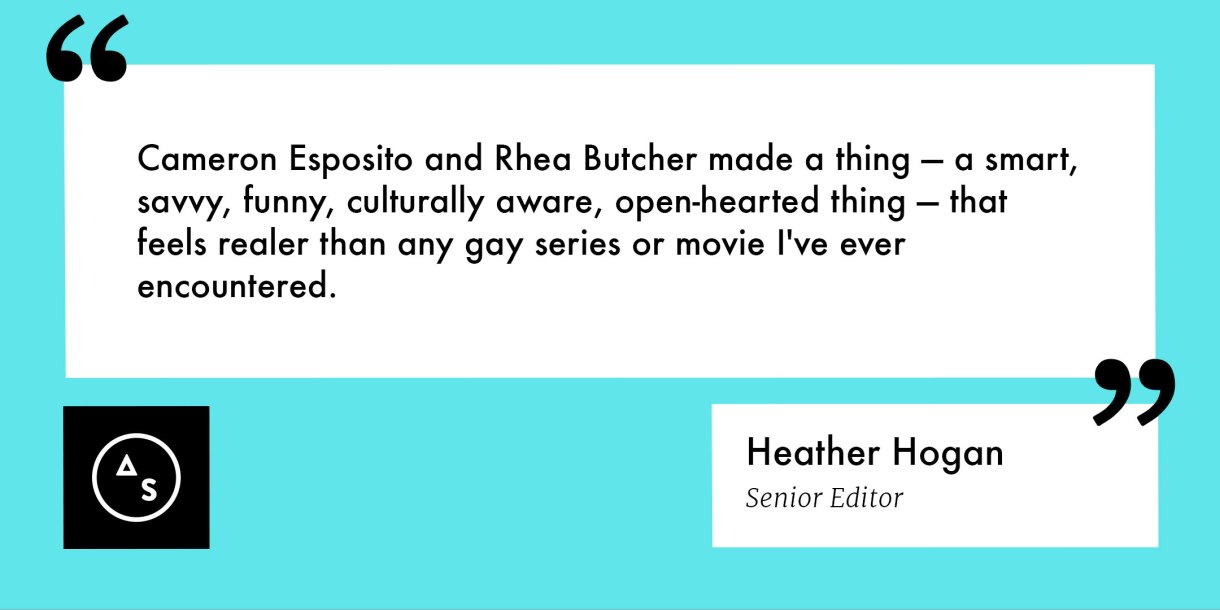 “I’ve been doing this job for almost ten years so nothing really surprises me about TV anymore, especially queer TV, but Take My Wife made me feel like a cartoon cat named Wide-Eyed Wonder. I maybe didn’t blink the entire time I was watching the first season. There are a fair few TV shows about us these days, but there are very few TV shows in history that are for us. Cameron Esposito and Rhea Butcher made a thing — a smart, savvy, funny, culturally aware, open-hearted thing — that feels realer than any gay series or movie I’ve ever encountered. I really want to emphasize the part about it being open-hearted. Most comedy these days is arch and sarcastic and dismissive (if not derisive) about the human condition. Which: I get it. I live in this world too. But there’s a relief in watching queer women on TV navigate love and commitment and their careers and their finances and find a way to laugh at all of it and themselves without reveling in a kind of cagey despair. This show made me laugh a lot, never at the expense of other people; and it made me feel really cozy in my heart.”

In conclusion, a thing I noticed on my fifth watch-through is that this is the only show about queer adults I’ve ever seen that did not include bars or feature its characters drinking or doing drugs or talking about drinking or drugs. I know Rhea Butcher has talked about her own sobriety in her stand-up, and although I’m not sure if it was an intentional choice or if it’ll be continued in Season Two, Season One will likely be an especially refreshing watch for any sober queers out there. This easy-to-miss element of Take My Wife truly speaks to what this show does best: it eschews the tropes we’ve come to expect from televised representations of lesbians (getting killed, getting pregnant, sleeping with men, hanging out in bars, excessive substance abuse) so unbelievably seamlessly. Let queer people tell queer stories and they’ll prove over and over again that those tropes aren’t beneficial, let alone necessary, to making good TV.

So — Netflix / Hulu / YouTube / Amazon / Whatever Else Is Out There IDK — you better pick up this show ’cause we deserve to be happy, don’t we? WE DO.