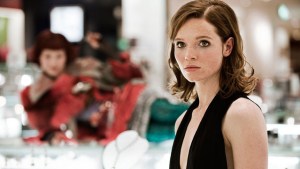 Lena from We Are The Night

Zombies have pretty much replaced vampires at this point, but you know what they haven’t replaced? Lesbian vampires.

We Are The Night, directed by Dennis Gansel (The Wave), is about an all-female gang of ruthless vampires with questionable morals and excellent aim. It centers around Lena (Karoline Herfurth), a 20-year-old from Berlin living as a pickpocket until she meets Louise (Nina Hoss), a 250-year-old owner of an underground club and the leader of a trio of vampires that also includes Nora (Anna Fischer) and Charlotte (Jennifer Ulrich), a former silent film actress. Louise falls in love with Lena and bites her during their first night together, introducing her to a life of glamor, immortality, and lesbian sex scenes — until Berlin police commissioner Tom Sterner (Max Riemelt) starts investigating.

Potentially good parts of this include:

+ The film can probably pass the Bechdel Test.
+ And it has lots of female main characters
+ And lots of those characters are into ladies
+ And have serious inclinations towards ass-kicking
+ While channeling David Bowie, but with better hair.
+ A new addition to the gay-lady vampire movie cannon, which currently mostly consists of The Hunger, films from the 70s and earlier called things like Vampyros Lesbos, Daughters of Darkness, and The Blood-Splattered Bride, and Carmilla.
+ A return to pulp-style vampire movies.

Potentially less-good parts of this include:

+ The original language of the film is German, and the May 27 release has been dubbed for English-speaking audiences, which can be frustrating sometimes.
+ Lena’s transformation from scruffy and androgynous to glamorously femme in what might be read as an attempt to appeal to mainstream or straight-dude audiences, but which either way results in less spiky, short, and awesome hair.
+ High risk of exposure to Twilight references.
+ A return to pulp-style vampire movies.

While We Are The Night doesn’t look like it’s going to break new ground in queer cinema, it’s also not trying to (nor, really, is it queer cinema at all). It’s a little conventional and closely resembles any given summer action movie, except that it has vampire lesbians who even unflattering reviewers say are “fleshed-out and believable.” I don’t necessarily believe we have to settle for “believable” characters where depth and development would be better; and I don’t think that all representation is good representation, or that there is so little lesbian content of any type around right now that a pulpy vampire flick is the number one thing to see. But We Are The Night also looks hilarious and fun, and not (just) in a campy way. The official trailer looks like this:

You can also see Lena’s transformation scene on i09.

We Are The Night opens in theatres in New York on May 27 and will be available everywhere else on demand.