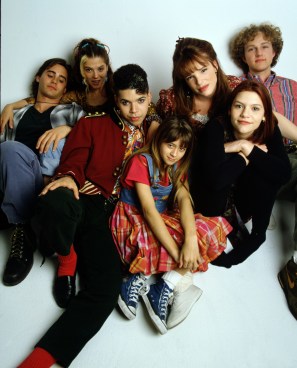 I’d been thinking about this a lot, too, this conundrum that inspired this thing that I just read on Slate.com called  Generation Catalano. Like I’ve been having thoughts like Doree Shafrir’s thoughts. I feel exactly as she feels. I’m 30. If you, too, find yourself born between the years 1977 and 1981, perhaps you relate. We are a distinct, yet unlabeled, generation, distinct also in the fact that we feel we need a label in the first place.

Growing up I remember wanting to be a part of Generation X, because they had Winona Ryder. But I knew I was too young to be in Generation X because I didn’t understand Reality Bites when I first saw it, I just pretended like I did. (I watched it again a few years ago and everything made perfect sense.)

But I’m not a Millennial, either.  Millennials seem to be defined by the fact that they grew up with technology, computers, whatever, social networking. I was 18 when I got my first cell-phone, 23 when I joined gmail, 27 when I started a profile on facebook. I’ve never used Napster.

I thought for a while that I might be in Generation Me, or Generation Y, but I feel too old for both of those, too. I think Generation Me has fallen out of favor. Do people still use those terms?

One night in the very early 00s, on our way to climb elementary schools (this is what we did for fun before alcohol), my friend Zach told me to read Douglas Coupland, who Doree mentions in her essay because he wrote the book on Generation X, literally. He told me that Douglas Coupland’s writing reminded him of my writing, because when he read my writing he often thought “She has her finger on the pulse of our generation.” He told me that if I kept my finger on the pulse of our generation, I could make a writing career out of it, just like Coupland did with Generation X.

So at Slate.com Doree Shafrir has a post on “Generation Catalano” and I think these are my people. If you’re reading this and you are too young/old to know about Jordan Catalano, I suggest reading Why Shane is the New Jordan Catalano and watching  My So-Called Life from start to finish.

…what seemed to be the best moniker for our micro-generation was a Teen Vogue editor’s suggestion: “Generation Catalano.” Jared Leto’s Jordan Catalano was a main character in the 1994-95 ABC series My So-Called Life, a show that starred Claire Danes as Angela Chase, a high school sophomore struggling with the thing that teenagers will struggle with as long as there are high schools: who she is. “People are always saying you should be yourself, like yourself is this definite thing, like a toaster. Like you know what it is even,'” she says in a voice-over in a midseason episode. So even though the themes of the show are in many ways timeless, today, My So-Called Life also seems like a time capsule, and not just because of the Scrunchies. There’s no texting; Jordan leaves a note for Angela in her locker. There’s also no Facebook or instant-messaging or cyberbullying (just regular old bullying). It was a show that most accurately portrayed my high school experience, minus the dating of Jared Leto, in part because it aired while I was actually in high school.

We graduated high school when America was at its Dreamiest, and we graduated college during a period best described as Apocalyptic. 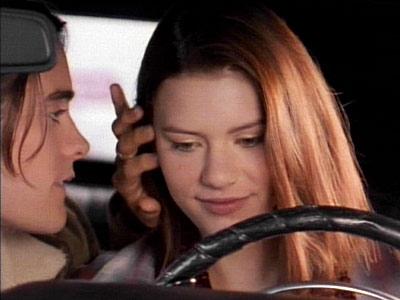 So! Here’s the funniest, bestest part — so, in 1998, I wrote an essay for my creative non-fiction class about the influence teen dramas like 90210 had on my social/romantic life. It was called “Shooting Kelly Taylor.” It was the first time I’d written about pop culture in that way. I felt like I’d found the thing I was good at — and 13 years later, here we are. In retrospect, it was a mediocre essay, but it was a place to start from.

The point is that here’s a paragraph from that essay:

After all, we are the “My So-Called Life” generation–the kids who had the one semi-realistic semi-functional television show ripped away from our preteen fingers after only 22 episodes, leaving us with only programs like “90210” and “Melrose Place” to satisfy our cravings for weekly escapist drama.  “My So-Called Life” was praised again and again for being realistic–for featuring a non-perfect girl living in a very nuclear family and angsting a lot, much like most of us.  Her parents had a normal relationship, she had a younger sister, a crush, not very many friends, and she didn’t even dress very well.  I don’t think we ever even saw her midriff.  The ratings weren’t high enough.  They yanked it off the air, and every single college and high school student remembers that junior high-day in May, when it was announced on MTV that there was no more “My So-Called Life”.  After the announcement, we stayed tuned for “The Real World”.

Finger on the pulse, kids.