Washington Post columnist and four-time Pulitzer Prize nominee Richard Cohen has said a lot of really special things over the years, ranging from his enthusiastic endorsement of the Iraq War to a recent defense of George Zimmerman in which he called Trayvon Martin “a young man understandably suspected because he was black.” Cohen believes Israel’s most significant misstep has been to establish its country “in an area [where] Arab Muslims (and some Christians) produced a century of warfare and terrorism” and as far back as 1986, The Washington Post was forced to publish a public apology when Cohen argued that crime-fearing jewelry store owners were smart to deny young black men entry to their stores.

Last week, Cohen saw 12 Years a Slave and realized for the very first time that slavery was not actually “a benign institution in which mostly benevolent whites owned innocent and grateful blacks,” but rather oppressive institutionalized terror. He has defended Stop-and-Frisk by arguing that “Black and Hispanic men are disproportionately stopped because they are disproportionally the perpetrators of gun crime,” considers affirmative action “atrocious” and unfair to white people, and thinks Miley Cyrus’s twerking and “teen culture run amok” contributed to the Steubenville rape (which he refers to as the “so-called Stuebenville rape.”)

So we shouldn’t have been surprised when yesterday, in his column about Chris Christie’s “Tea Party Problem,” he put forth the following pile of shit:

Today’s GOP is not racist, as Harry Belafonte alleged about the tea party, but it is deeply troubled — about the expansion of government, about immigration, about secularism, about the mainstreaming of what used to be the avant-garde. People with conventional views must repress a gag reflex when considering the mayor-elect of New York — a white man married to a black woman and with two biracial children. (Should I mention that Bill de Blasio’s wife, Chirlane McCray, used to be a lesbian?) This family represents the cultural changes that have enveloped parts — but not all — of America. To cultural conservatives, this doesn’t look like their country at all.

To cultural progressives and realists, however, this looks exactly like our country, and we wish more of our politicians embodied this diverse and accurate vision. Nor is interracial marriage a wedge issue — Ezra Klein, also at The Washington Post, pointed out that “acceptance of interracial marriage is overwhelmingly conventional.  A July poll from Gallup finds that 87 percent of Americans approve — up from 4 percent in 1959.” 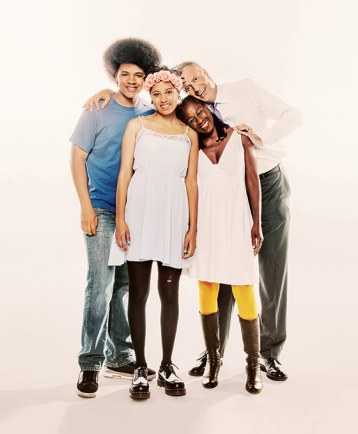 Of course, Cohen’s claim that interracial marriage inspires spontaneous vomiting is only the tip of his problematic iceberg. The first sentence alone is so wrong it’s almost laughable, because not only are the GOP and the Tea Party totally racist and not only is their pervasive racism a driving force in their refusal to work with President Obama and develop an effective government, but there’s absolutely no way that white Richard Cohen is a better judge of the Tea Party’s racism than Harry Belafonte, a black man. Ta-Nehisi Coates at The Atlantic had this to say about Cohen’s claim that these views aren’t racist: “Right. I’m not racist. I just don’t recognize my country. Also, the sight of you, and your used-to-be-lesbian black wife, and your brown children make me sick to my stomach. It’s not like I want to lynch you or anything.”

The backlash against the column’s obvious racism has been swift and severe: Salon.com tweeted that Cohen should be fired and Slate.com suggested that WaPo “reconsider whether regularly publishing racist op-ed columns is a wise business strategy.”

The dig at McCray’s sexual orientation shouldn’t be overlooked either, however, especially because it’s a situation for which Cohen is not alone in his flippant evaluation. Even the most responsible news outlets have repeatedly made the mistake of defining McCray as a woman who “used to be a lesbian” rather than a woman who “used to identify as a lesbian.” (Which is how she has described herself.) The “used to be a lesbian” trope is often more succinctly referred to as “the hasbian” trope, and “Hasbian” is a term used to degrade and belittle same-sex female relationships and to erase sexual fluidity and bisexuality. New York Magazine dating columnist Amy Sohn described a “Hasbian”‘s lesbian past as “a meaningful but finite phase of their lives, like listening to a lot of Morissey or campaigning for Dukakis.” Details claimed that many “Hasbians” simply dated women in the past because it was a cool thing to do in the ’90s. Language like “used to be a lesbian” also aims to belittle and discredit the human being herself, which seems to be what Cohen’s gunning for with his snarky aside.

Some background: Chirlane McCray was a member of the legendary black feminist lesbian Combahee River Collective in the mid-to-late ’70s, and in 1979 she published the groundbreaking world-changing “I am a Lesbian” essay in Essence Magazine, which a May 2013 Essence article described as “a revelation, perhaps the first time a Black gay woman had spoken so openly and honestly about her sexuality in a Black magazine.” McCray had dated women pretty much exclusively since coming out at the age of 17, and then, in 1991, she met Bill de Blasio while working in City Hall in her capacity as a press-office staffer for the NYC Commission on Human Rights, and they fell in love.

She told Essence in May that she fell for de Blasio by “putting aside the assumptions I had about the form and package my love would come in. By letting myself be as free as I felt when I went natural.” When asked if it was strange to be with a man, she said “I didn’t think, Oh, now I’m attracted to men. I was attracted to Bill. He felt like the perfect person for me.” She does not identify as bisexual, however, saying “I am more than just a label. Why are people so driven to labeling where we fall on the sexual spectrum?” and when asked if she’s still attracted to women, said, “I’m married, I’m monogamous, but I’m not dead and [laughs] Bill isn’t either. I know my husband loves me fiercely and passionately. I know he supports me and will always stand up for me.” 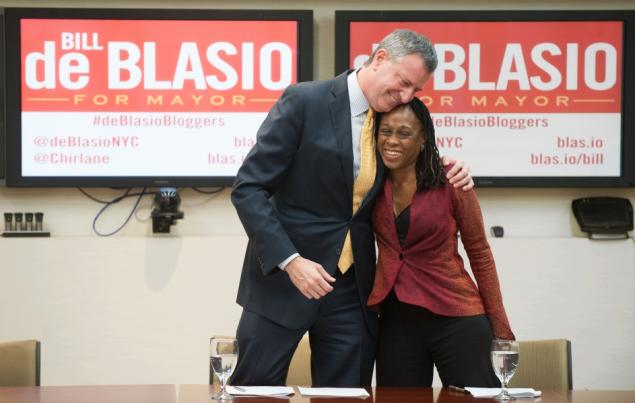 Today, Cohen told The Huffington Post that his column wasn’t racist, obnoxiously and predictably declaring that “the word racist is truly hurtful. It’s not who I am. It’s not who I ever was. It’s just not fair. It’s just not right.” (Maybe he should read this.) Cohen says the “gag reflex” sentence was taken out of context and that he thinks anybody who has that reflex would be racist. But, if he truly intended the paragraph to serve as a description of conservative attitudes and not his own, then it’s confusing that he would open by declaring the GOP and Tea Party not racist, if his subsequent evaluation was intended to classify the gagging masses as racist. He also told The Huffington Post that The Tea Party isn’t racist because there are black people in it, and that everything he said should be taken in context as somebody who has written “100 columns in favor of homosexual rights.” (So, it bears mentioning that he’s also blamed some of the spread of HIV on the gay population”conduct[ing] itself in ways that are not only reckless but just plain disgusting.”)

To summarize — Richard Cohen believes the following things are not racist:

Ultimately, it doesn’t matter how many columns Cohen has written in support of same-sex marriage (and it’s true, he has done that) or that he’s justifiably argued that The GOP is a fucked-up cult — if he can’t see the blatant racism of George Zimmerman or The Tea Party, if he believed until seeing 12 Years a Slave that slaves were “sort of content,” then he’s clearly unfit to assess racism in any context, especially his own. Cohen told The Huffington Post that he’s labeled a racist because “people view him as a liberal and find some of his positions unconventional” and that nobody would care “if someone on the right wrote this.” No dude, you’re labeled a racist because you are one.

There’s now a petition on Change.org asking Jeff Bezos, who recently purchased The Washington Post, to fire Richard Cohen. But Cohen’s editor Fred Hiatt has already told The Wrap that “I think he is a terrific columnist. I’m very happy to have him in The Post.” Zack Beauchamp on Think Progress aptly wrote today that “Cohen isn’t a culturally conservative intellectual; he’s just someone who passes off lazy stereotypes as profound insights” and that his column is now “an evidence-free font of prejudice, the Platonic ideal of a useless old media dinosaur.” Indeed — and it’s a dinosaur long overdue for extinction.