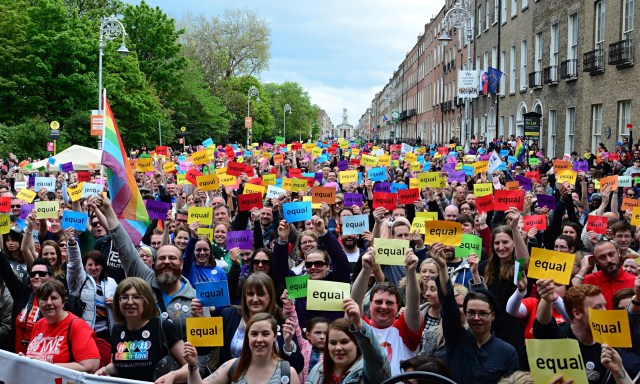 On May 22nd, Irish citizens will vote on changing the Constitution to allow anyone to marry regardless of their gender. You might not be aware of the Referendum if you’re living outside of Ireland, but here on this tiny green island, the fight for and against marriage equality is foremost in the national conversation. It’s a conversation you may have heard before, but it’s marked by a monumental first — the ability of a people to directly establish marriage equality in their country’s constitution — and peppered with any number of nuances that make this a different right than the ones I’m familiar with from American-centered media as an American now living in Ireland.

Ireland is undeniably Catholic in its veins, even if fewer than 1 in 5 Catholics attend mass on a Sunday in Dublin. Sure, you can’t throw a stick on this rock without hitting a statue of Mary or any number of favorite saints, but the landscape of altars and outstretched arms is not just for show. The Church has always had a strong influence over the Irish state, which accounts for its continuing conservativism on issues like abortion and birth control. Abortion on demand remains illegal in the Republic. Sales of birth control were banned until 1978, at which point they became available with a prescription. You can now buy condoms in your local pharmacy without much fanfare, but most generations of Irish have grown up without formal sex education and a heap of societal repression.

Marriage is one of the foundational values of Catholicism, and thus has historically held a high standing in the Irish state. Divorce was illegal in Ireland until 1996, outlasting the lift on criminalization of sodomy by three years. In Irish society, marriage still carries a great deal of importance in the legal sense, as it is a Constitutional protection of another value at the heart of Ireland: family. It was unquestionably huge when Ireland passed civil partnerships as a way for non-heterosexual couples to have some legal bindings, but it was not a permanent solution. Civil partnerships are not Constitutionally protected, and they do not offer the legal protections to the family that marriages do — I should know, as I’m in one. It seems that the acceptance of queerness in Ireland, particularly our relationships and family-building, was always going to come down to the issue of marriage. It might just be, as they say, an Irish solution to an Irish problem. 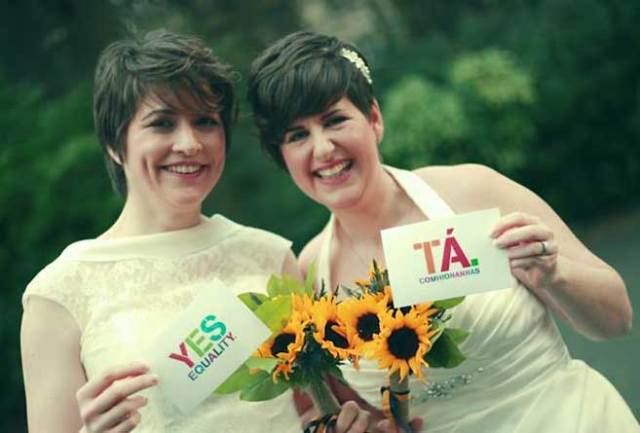 Ireland is a small country, with a total population smaller than the city of Philadelphia. Size is one of the most important factors in the Referendum – literally everywhere the country is talking, in small conversations and big conversations, about marriage equality. This is a conversation that can be overheard on the bus, at the butcher’s, between your two elderly neighbours or strangers in the Tesco. Every person in the country is aware of this issue, and feels a responsibility to develop an opinion on it. It has become important in a way I could never imagine it becoming important in American terms. In the weeks leading up to the Referendum, business windows have sprouted rainbow flags and supportive posters, every lamppost in Dublin is encouraging one side or both, every third lapel on the street sports a Yes badge. You cannot escape the topic or its eager debaters if you try, a fact both exhilirating and exhausting in the last days coming up to the vote.

It’s true that Irish society has changed rapidly in the past few decades, at a rate faster than almost every other European country. One factor responsible for this change was sudden economic growth – the infamous, and admittedly fleeting, Celtic Tiger. The speedy transformation from one of Europe’s most socially conservative societies to a country liberated by new values and new priorities is largely responsible for the push towards marriage equality, but it does not guarantee a Yes at the polls. Youth voters are notorious for big talk and small turnout. Allyship is a tenuous concept, although I have never in my life seen the kind of passionate and caring allies I have witnessed stepping up for this fight. As the fight has become increasingly personal and significantly louder, it’s been helpful to have people who are willing to stand up and be a buffer so that LGBTQ folks can do some very needed self-care.

That Catholicism I mentioned earlier? It’s a sneaky reason why the opposition to gay marriage rings so differently here than it does in the States. Americans may be used to Old Testament-fueled rants against sodomy, all that brimstone and hellfire and God Hates You Know Whos, but the Irish organizations against marriage equality are less likely to defend themselves with Bible verses than they are to swear they are defending the family itself. Yes, it’s ‘Won’t someone think of the children?’ that dominates the dialogue here, that Irish Catholic family that is so dear to the national heart. I hate to give attention to their undeniable bullshit, but I don’t have room in my heart to let someone claim that hate speech is a valuable component of democracy. Knowing that family and children are so important to the heart of Irish culture, organizations such as the Iona Institute and Mothers and Fathers Matter are blowing a great deal of smoke about surrogacy, an issue that has nothing to do with the Referendum. They’re also throwing up thousands of posters of smiling happy stock photo families, reminding the public in heart-accented typography that children deserve a mother and a father, that two men can never replace a mother’s love, and that a vote for marriage equality is a vote against the rights of children. Never mind, of course, the rights of a child who will not be legally protected when her mothers are unable to marry, and their civil partnership abolished by a future conservative overhaul. Never mind the rights of queer children growing up all over Ireland, seeing these debates about their ability to love, their place in a family, and wondering how their homes and communities will think of them. 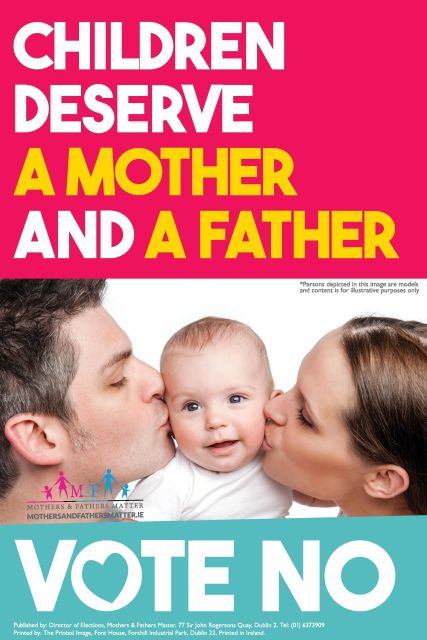 Imagine about 3000 of these on every lightpole in Dublin, and you have an idea of my daily commute.

It’s true that not every gay person is looking to get married, and a change in wording to the Irish Constitution will not cure Ireland of all instances of homophobia. It feels ridiculous that I need to state that disclaimer – marriage equality will not solve all of our community’s problems – but I do. If you’re like me, you may be used to an American-centered conversation around marriage equality that feels stifling, divisive, and often erasive of other queer experiences and needs. It would be easy to take this perspective and apply it to the Irish Referendum, but to do so would be to ignore the complicated differences between the two situations. Marriage equality in the United States is decided on different terms, represents a different political situation, and holds a different value than it does in Ireland. I was not always in agreement with the American campaigns for marriage equality, but I would be wrong to apply the situation of my home country to the one in Ireland.

More than anything, I am personally involved. In the United States, by and large political representatives are the ones actually voting for marriage equality, on whatever terms it has arrived in the legislative houses. Before I reach those representatives, they are met by any number of financially gifted lobbyists and interest groups, some of whom share my orientation but not necessarily my values or my experiences. Here in Ireland, my neighbour will decide if I can marry and have legal protection for my children. My colleague will decide, and so will my doctor and my grocer and the people I pass on my way home. I cannot vote because I am not yet a citizen, but I can speak directly to the people making that decision. And hopefully, when and if the time comes, I can thank them for making the rest of my life safer and much more possible.