Among other things, we at Autostraddle enjoy reading, talking feminism, and watching documentaries. Which is why I’m ecstatic to announce that the Media Education Foundation has just released a documentary based on a book about feminist ideals. The Purity Myth, by founding editor of Feministing, Jessica Valenti, will explore how traditional ideas about virginity have been making a comeback.

Valenti believes that conflicting messages from conservatives who push for chastity and the mainstream media who objectify women are nothing more than two sides of the same coin–one that pressures women to put all their self-worth in their sexuality. She explains that  “the lie of virginity–the idea that such a thing exists–is ensuring that young women’s perceptions of themselves is inextricable from their bodies, and that their ability to be moral actors is absolutely dependent on their sexuality.”

Like all good documentaries, The Purity Myth offers a bit of voyeuristic appeal. I find this particularly useful because like bedbugs or black holes, purity balls, abstinence-only culture, and conservative pundits are things I like to be aware of but hope to never actually come into contact with.

The idea that virginity might not actually exist is something I hope to hear more about in the documentary. Why is it that our culture (among others) puts so much stock in that magical time in a girl’s life when she’s never had a penis inside of her vagina? As one commentator in the preview points out, plenty of people believe so strongly in the concept of virginity that they have every kind of sex except P-in-V sex in order to remain “pure.” 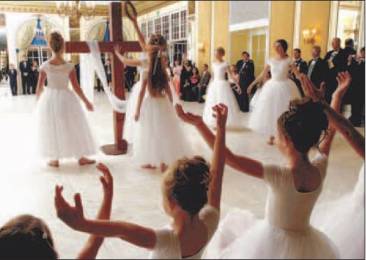 From a queer perspective, virginity isn’t something that’s so cut and dry. The line between what everyone agrees is and isn’t sex is blurry at best, making it harder to place value on what’s really an arbitrary distinction. This week’s “My First Time” on Nerve–which was adorable! I’ll wait here while you go read it– featured a lesbian who was totally upfront about what virginity means to her.

“I know that a lot of people disagree about what virginity means to a gay woman, but virginity is totally subjective, and it really depends on who you’re asking. Some people might say penetration has to be involved, but I think it’s up to the person losing his or her virginity. If I feel like I’ve lost my virginity, then goddammit, I have!“

(Autostraddle’s views on “is it sex?” are similarly openminded, for the record.)

When sexuality is framed positively, women gain the agency to make decisions about their bodies and take control of their experiences. Who would have guessed?

You can contact your university about buying The Purity Myth. For news about screenings and discussions, follow Jessica’s tumblr.