In the past year, a lot has been written about Vida’s groundbreaking Season One episode that depicted a one of a kind lesbian sex scene from a queer Latinx gaze never before been seen on television. It didn’t just catch our attention — the episode became a critical darling even across straight media. I think of Season Two’s Gay Vaquero episode (which airs this weekend on cable, or right now if you’re streaming from the Starz app!) to be its complement, and one that has no interest in being legible to straight ears.

In Season One, we got to learn about Emma from someplace more carnal, seeing both her and each other via our connections to the the hard-fought lust of queer sex. In this new episode, queer psychology is brought to the forefront of a tangled and well-lived intra-community debate — which sounds absolutely far reaching, abstract, and overly academic, except that it plays out from the small-scale viewpoint of a guest table at a wedding reception. 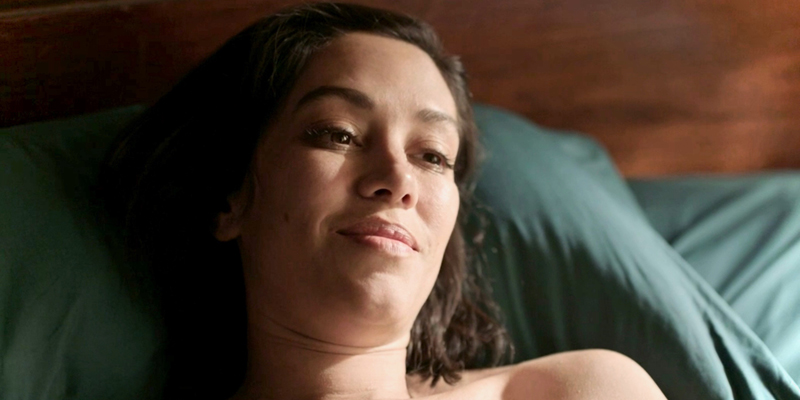 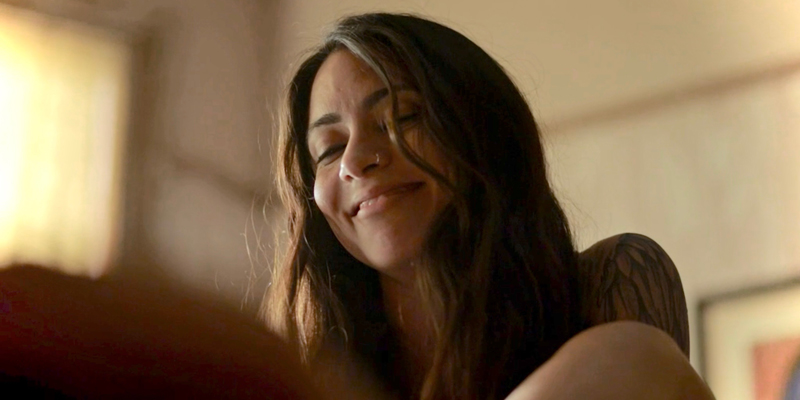 This doesn’t mean that there isn’t also hot sex! Vida once again continues its reputation for accurately capturing some of the most exquisitely detailed, realistic, and damn sexy lesbian sex scenes on television. And it’s not only how the camera pans over the toys on Cruz’s bedside as if they are finest Tiffany’s jewelry to ever be seen on a paper towel that makes it all so stunning. It’s hearing the familiar buzz as Cruz turns the toy on. It’s the way she elegantly slips a condom over it (and who said safer sex couldn’t be hot).

It’s in Emma’s whisper moan, “Go inside me.”

It’s Cruz’s smirk just as she angles her wrist.

Ahem. It’s also in the differences between this season and last. Last year Emma fucked for control. She fucked to get the pain out of her body and into someplace tangible, someplace she could conquer. Emma still has a lot of sex for power in Season Two, especially during her encounters with cis men, but with Cruz, this time it’s different. There’s daylight cresting from behind the windows of Cruz’s apartment. Her sheets are soft. Emma has an orgasm without topping.

The girlfriends lie together tangled in Cruz’s sheets. Emma has family business to attend to but “My legs don’t work.” Cruz invites her to her cousin’s gay wedding with the rest of her chosen family, and that’s where Vida gets ready to have the difficult conversations.

The wedding in question is over the top in every perfect way. Vaqueros are cowboys, and just as cowboys are essential Americana, they play a significant role in Mexican culture and cultures across Latin America. Vida delights in queering the archetype and the results are an absolute love letter. From the minute Emma enters the wedding, Cruz’s hand gently guiding her by the small of her back, she tenses. This is full on jotería (gayness) in grand display. The flowers are bright hues of pink and purple, drag queens are sitting the audience as wedding guests, Marcos — Cruz’s genderqueer femme friend from Season One — is playing wedding attendant in a full face of makeup and dangling gold earrings. Then come the grooms hand-in-hand as they walk down the aisle dressed in full cream and white tuxes with black lace and gold sparkle detail, bolo ties, bright white cowboy hats.

Emma can’t take her eyes off of them, but when the camera raises past the shoulder of the wedding couple to focus in on her face, it’s as stoic as ever — despite her frantic eyes. Maybe there’s a part of her that even imagines wanting this one day for herself? Maybe all the gayness is reaching the tipping point of her comfortably? Whatever is happening, she’s working overtime to bottle it back down in classic Emma Hernandez fashion.

At the reception, Cruz’s friends invite them over to their weekend cabin to shroom and sit by the fire. You know, couple things. Cruz agrees on behalf of Emma, who looks less than psyched about the idea. She excuses herself to order a “Homo on the Range” — tequila, Champagne, grenadine, with a twist of lemon — at the bar. She meets Nico (Roberta Colindrez), the bartender and Best Man whom showrunner Tanya Sarah has admittedly called “her own dream girl, designed in the writer’s room.”

Nico is a dreamboat alright, and when the military vet later tips her cowboy hat at Emma after joining the group at their table, you would have to be a stronger woman than me not to scream. 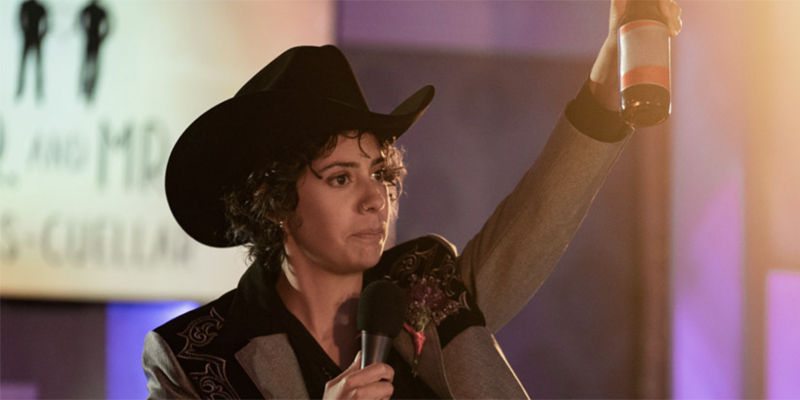 During her Best Man’s speech, Nico argues that true love means finding someone who loves you for yourself. It means that “You don’t have to change who you are, because they inspire you to be the best version of yourself.” Cruz reaches for Emma’s hand as if she sees a bit of them in the speech.

Cruz tries to pull Emma into her lap at the table. When Emma cringes at the gesture — we all know that public displays of affection are very far from her “thing” — one of Cruz’s friends remarks that when she was a baby gay, she also had a hard time with being out in public. She meant it to be an open door of understanding, but Emma is a very grown woman and far from being a “baby” anything. She doesn’t appreciate people making assumptions about her.

Cruz weakly comes to Emma’s defense by arguing that coming out is a different process for everyone — except that Cruz of all people should know that Emma’s been “out” since at least high school. Her discomfort stems at least in part from her own lasting trauma with her mother and surrounding her sexuality, it has absolutely nothing to do with being new at being gay. Then another of Cruz’s friends joke that maybe Emma is just a tourist visiting Lesbian-town, and that’s when I lost it.

“I haven’t had to deal with the concept of tourists since Shane was flipping bitches on The L Word, amirite?” goes Nico, working quickly to diffuse the growing tension at the table.

But Cruz’s friends won’t be deterred from their target. Next comes a dig to Emma for being able to “pass” as straight because of her tightly wound femme aesthetic. Once again, Nico tries make a joke out of the affair, warmly suggesting that Emma get an asymmetrical haircut or a rat tail because “how else queers are supposed to announce themselves if not through the confines of the binary.” Cruz, noticeably, has remained silent throughout the exchange.

Emma’s been set up for a lose-lose battle. Her gender presentation and aesthetic are apparently too “traditional” to be queer, but at the same time her choice to not only sleep with women opens her up some decades old queerphobia and biphobia tropes of being a “tourist.” By either measure she’s apparently “not gay enough.” According to Medium.com pansexuality is the new right of passage for newly out baby gays, according to Cruz’s friends.

With that Emma, who’s severely wound and tightly controlled almost every second of her day, finally blows a gasket:

“I’m sorry that I don’t abide by your dated categories of queerness. I’m sorry that you think I’m confused or indecisive because I have a WIDE RANGE of what I can get off to.” 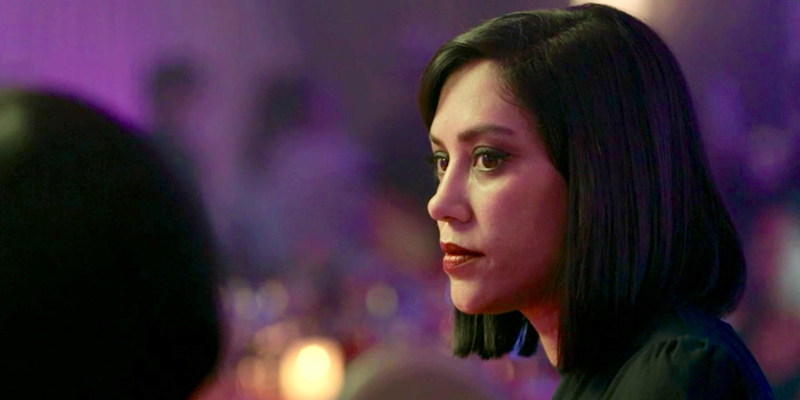 That’s a manifesto I’d be willing to get tattooed across my shoulder blades. Fuck having to live up to anyone standards but our own. I’m an out queer woman, who specifically identifies as queer, and writes for a lesbian website. Any one of us who’s bisexual, or pan, or queer have had to sit through drunken conversations exactly like this one, even from supposed allies and especially within same-sex spaces that are supposed to feel safest for us. Conversations where assumptions about who we choose to sleep with or how we choose to adorn our gender is met with blank stares or derision. And that’s a dynamic that’s rarely talked about on lesbian television with as much bell-ringing clarity as it is right here.

Cruz attempts to change the subject by implying that Emma had her first bottom orgasm that morning, and if there was ever a worst time for such an admission, it’s now. This is betrayal. Emma’s ability to open herself up to Cruz — tentatively, slowly, piece by piece — is not for public consumption. Especially not in front of the very same people who’ve spent much of the wedding reception making fun of her. Cruz is not just Emma’s current girlfriend after all. She’s Emma’s first love. She’s the reason that Emma was kicked out of Vidalia’s house as a teenager.

For Emma, being here at this wedding as Cruz’s date is a part of coming back full circle. Being here, among all this flamboyantly and joyously over the top jotería is a reclamation. How dare Cruz make light of it.

In Vida’s first season, Cruz was patient and loving. She understood, more than anyone else, the hurt that Emma had to muck through. She pushed when needed, but certainly never like this. I don’t know what happened with her re-characterization in the second season, but it felt out of form, and at much cost to the relationship that both Cruz and Emma fought hard for last year.

Emma excuses herself from the wedding early, and Cruz follows her into the staircase. She pretends not to understand why Emma was upset, after all it was just “discourse. It’s how people of substance connect with each other” — a striking critique to the common place (and often misused) queer slang for conversations that value the supposed political correctness of theory, instead of the messiness of our lives.

“Fuck you and your pseudo-intellectual condescension. You loved watching your pack tear me apart,” Emma bites back.

This is purposeful, moving Emma outside of what’s usually understood as legible queerness. It’s saying to the audience that we don’t get to define Emma. We don’t get to tell her the terms of our understanding. She’s going to make those choices for herself.

“Emma ,you are the classic cautionary tale of why moms need to hug their children.”

Yep. The thing about letting people into you heart is that then they know the exact way to hurt you.