Welcome back to your Twenties recap, episode 203 — otherwise known as the one where if you squint just hard enough from a distance and don’t talk back or ask too many questions, it’s actually the 2017 Oscar winner Moonlight. In our last episode, Hattie learned that just because she’s cute, that’s not enough to carry her through life unless she’s willing to work for it.

We also learned that Marie is about zero.point.zero seconds away from fully cheating on Chuck, which brings us to…. 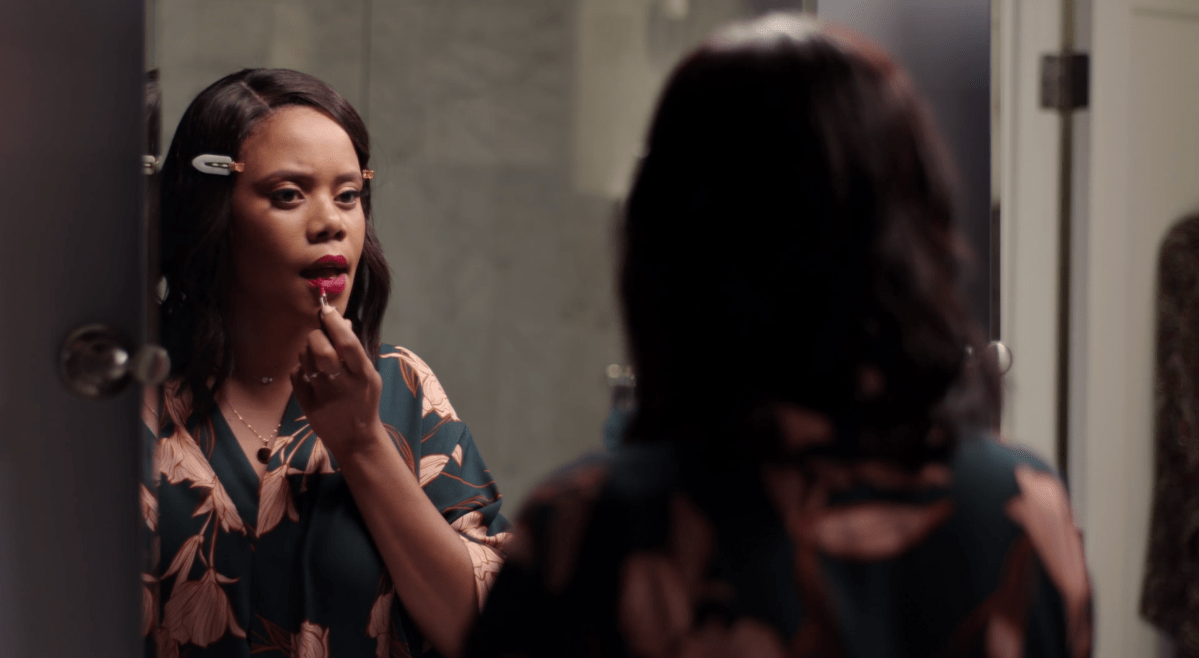 You know what would go great with this lipstick? A cute tote bag from the Autostraddle fundraiser

In a ridiculously glacial bathroom, Chuck wants to talk about social media hashtags for his and Marie’s upcoming wedding. Marie’s mother calls to remind us that she has a terrible relationship with her daughter. Basically, the overall thing here is that these are two people who just absolutely should NOT be getting married. More on that soon.

Meanwhile, Hattie is back living at Nia’s and looking like a snack in her new delivery uniform. Sadly, the rising fires of my lust quickly burned out when Hattie — for no reason at all — hates on Nia becoming a gif due to her popularity on Ida’s show. Now sometimes we can’t help feeling jealous when our friends are doing Big Things and we are stuck stagnant, I get that Hattie is not immune to the human condition. But if I were sleeping on someone’s couch, I wouldn’t fix my mouth to hate on that person’s success, just saying. 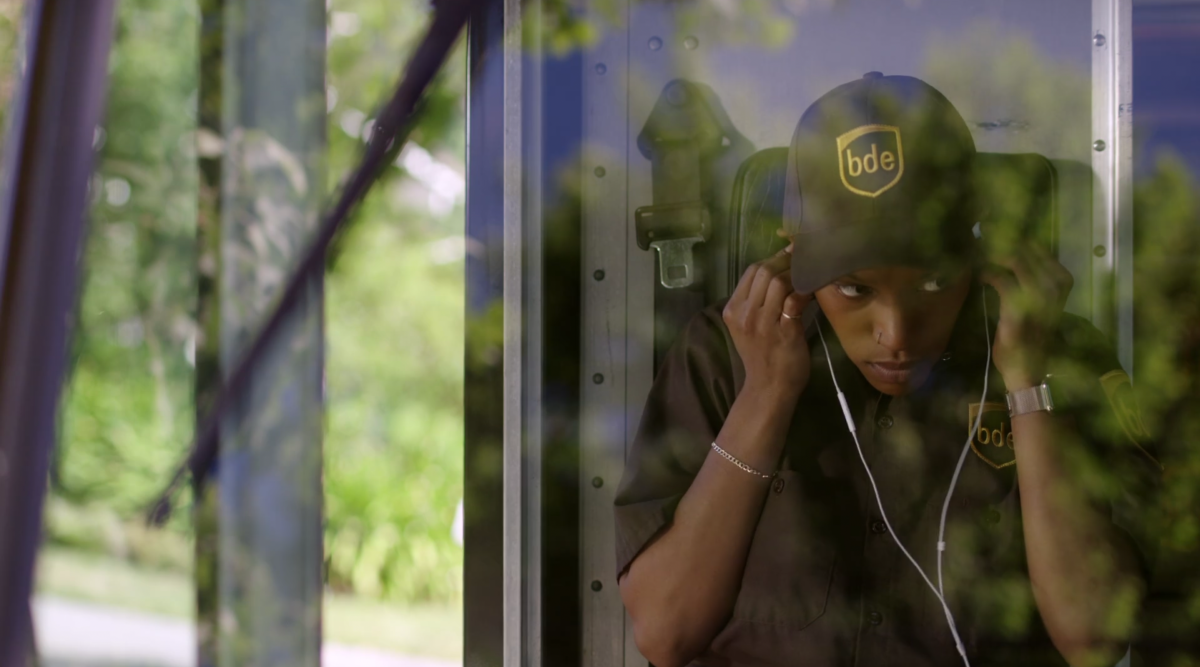 Hattie’s in her trainee period at (fake)UPS and she’s shadowing comedy GOAT Louie Anderson, who I’m glad to see working — if Louie Anderson is one of those cis white men who did something awful, just let me know in the comments and I’ll edit this statement, but for now, good for him!

Ida FaceTimes Hattie in satin lingerie and a robe that only a middle-age femme can pull off, talking about “look at you” with her voice all husky as she takes in Hattie in her uniform (Hattie, smiling while posing with her delivery package: “I’m a working woman now”). 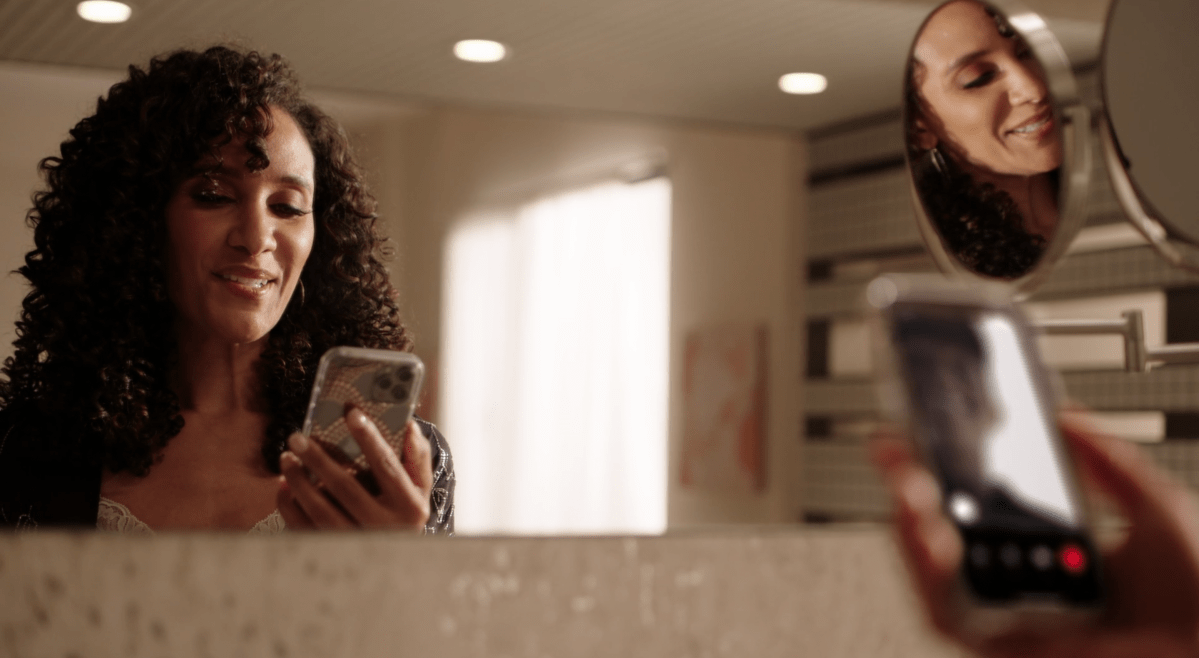 You don’t need to see my google history… 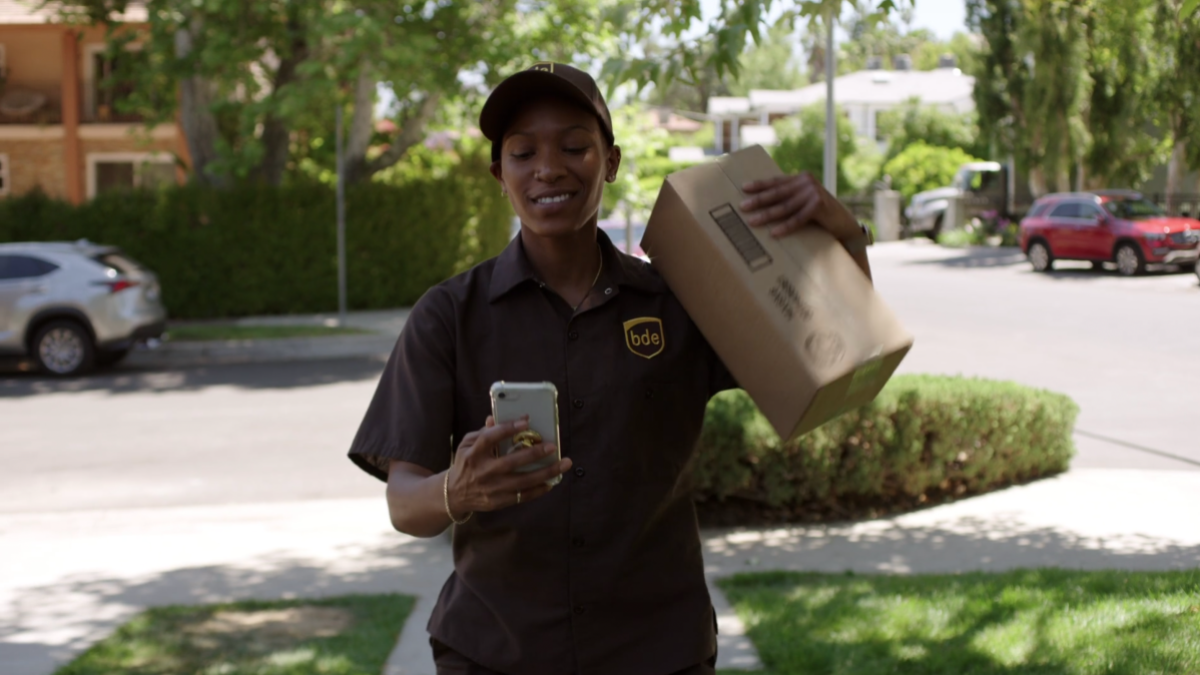 Now when we left Ida and Hattie last week, they were on the outs because Ida had the audacity to encourage Hattie to you know… do a better job at her supposed life’s passion.

Hattie hates her new job (mind you, she’s been at it one day) and offers that Ida could hire her back. Ida responds, “I can’t sleep with my subordinates.” AND THAT IS WHY WE ARE TEAM IDA AROUND THESE PARTS! Respect the boundaries. 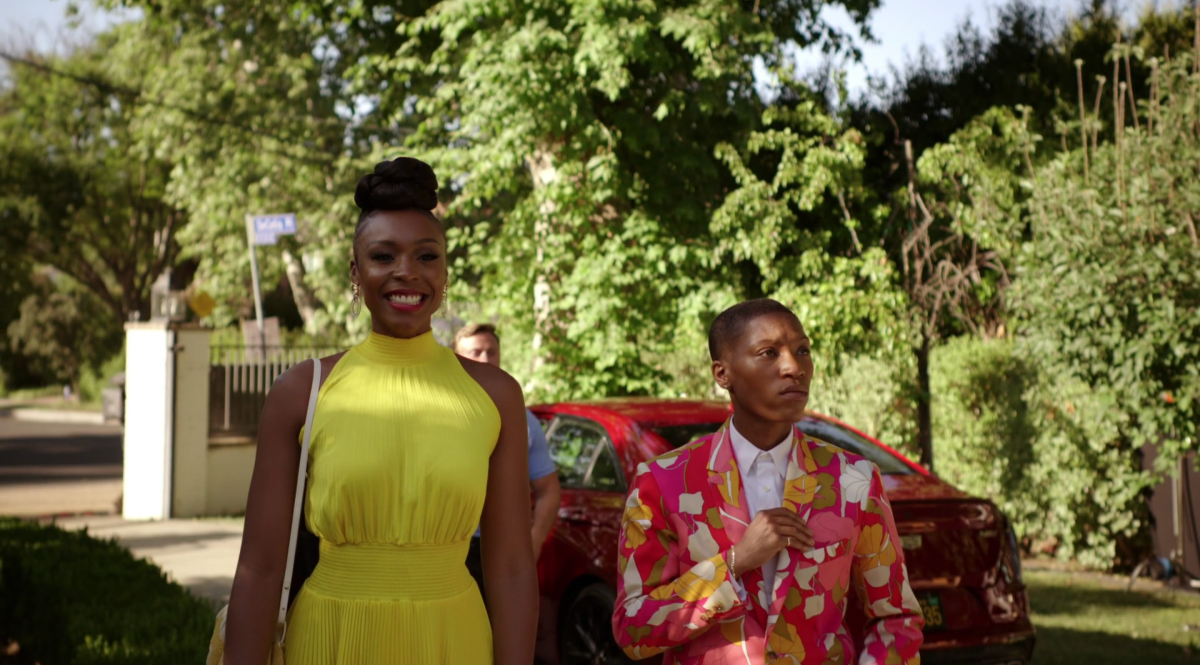 I know Nia is straight, but this is the tall femme/short butch representation that we need

A forever fan of the U-Haul, Hattie wonders if she and Ida will ever get married (Nia hopes not, so she is now #1 on my revenge list). Nia’s excited to live vicariously through Marie’s bougie dreams, and she jumps right into it, having boring bougie flirtations with Chuck’s college roommate Chance.

Chance, to Nia: We’d have some beautiful brown babies.
Nia: Oh, boy, girl, then another boy is my dream.
Chance: I like that idea! Two boys and a girl. So she can be the princess.
Hattie, representing for gays forced to mingle at their straight friends’ events everywhere: How ‘bout y’all let ya’ll kids tell you how they identify? Damn, that’s why we so messed up now.

My attention span for straight people only goes but so far, here’s a roundup of other Engagement Party Shenanigans: 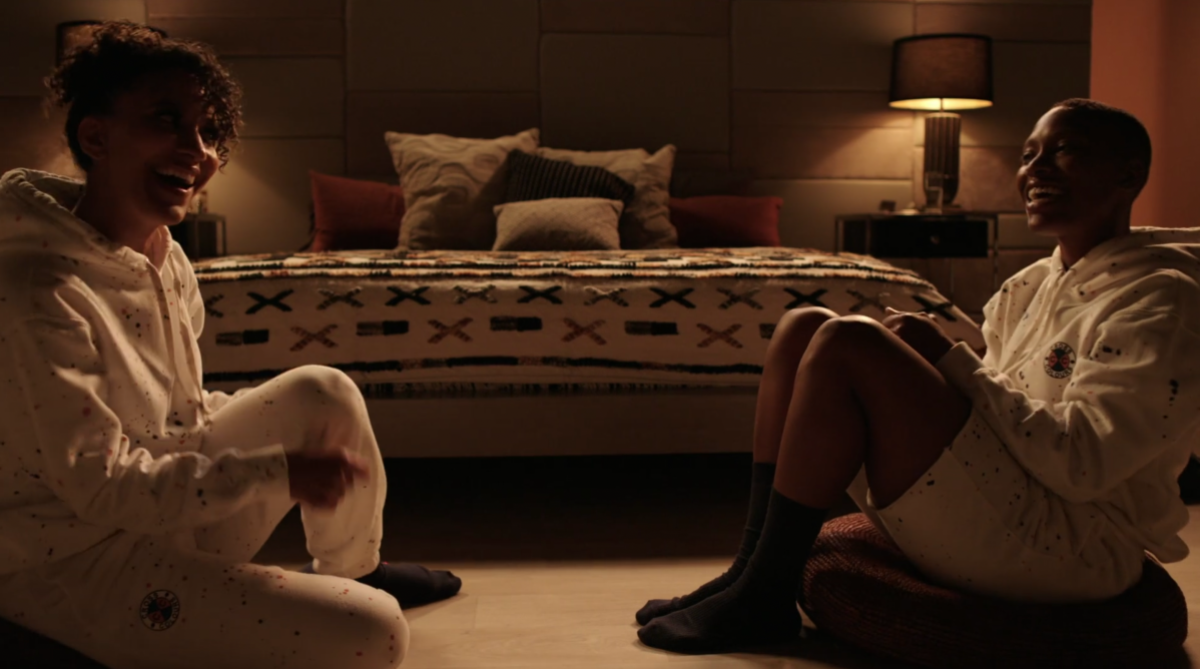 If someone had told me that being a lesbian is at least 35% just being goofy in at a forever adult sleepover, I would have come out a lot sooner.

Hattie spends the night at Ida’s house in — and I am sorry but we simply must all caps scream about this — MATCHING CROSS COLOURS HOODIES!!

That’s where we are, matching with our girlfriends, elite level dykeness.

Hattie calls the game of Jacks they are playing “prehistoric” and Ida laughs the self-satisfied laugh of a woman in her 40s who has a youthful, energetic, 20something in her bed. She tells Hattie to “focus.” Hattie says that Ida knows that her hand/eye coordination isn’t the best — really now? Just HOW does Ida know that? The people want to know! 👀 — and the conversation shifts to Hattie’s new job.

The training days are taking up all the time from Hattie’s writing. Ida suggests that Hattie work on time management, we all have to do it, and unlike last week Hattie doesn’t respond in defense. YOU SEE THAT GROWTH??? 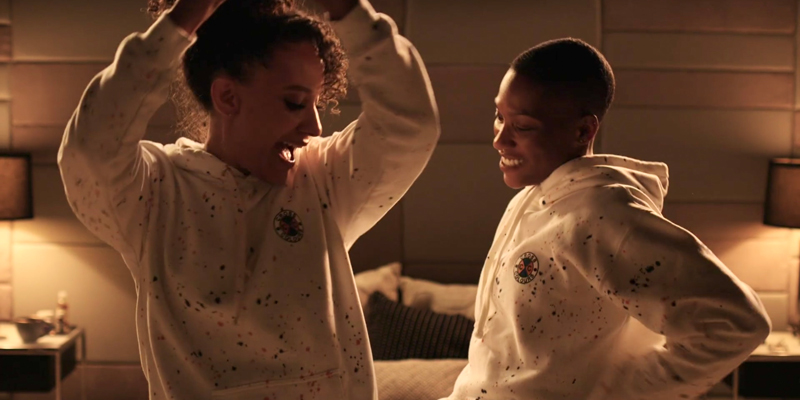 I tried so hard to screengrab the moment where they grind and Ida looks back on it, but BET won’t let me be great

However, Hattie does make fun of Ida for being a germaphobe neat freak. Which then leads to Hattie making note that Ida is a whole other kind of freak and before you know it they are… TOGETHER… IN MATCHING SWEATS… BADLY SINGING JODECI AND LAUGHING and if you saw a cuter lesbian moment on television this week, no you didn’t.

But somehow, Hattie and Ida don’t have the biggest gay moment of the episode. That comes for Chuck. 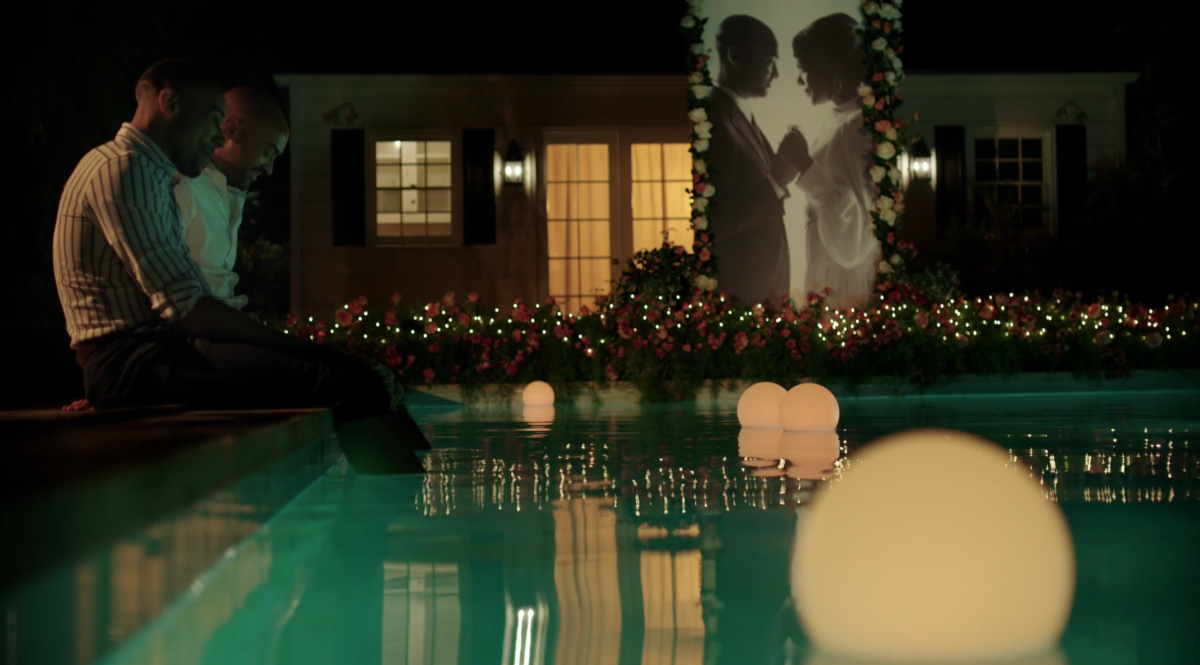 While I have your attention, Autostraddle.biz, thank you.

Chuck and Chance are sitting side-by-side with their feet in the cool pool water at Chuck’s parent’s house (the site of the engagement party). Chuck and Marie’s larger-than-life engagement photo shines behind them. Lanterns glowing everywhere.

Chance thanks Chuck for including him in all of this. Chuck smiles. He wouldn’t have had it any other way.

Chance wonders if Chuck is scared to become “that perfect Black dude” — you know with the perfect wife, kids, matching pajama pictures at Christmas. The kind of dude that Chance was pretending to try on earlier, with Nia.

Chuck’s not scared, he’s been waiting his whole life to be that dude.

Chance knows he has. And he also knows that Chuck is looking for permission, anything, to be something other than what his parents have expected his entire life to be.

Chance looks at Chuck with such care in his eyes that even with the teal blue of pool shimmering across their night faces, it warms the entire screen. “You don’t have to be straight for them to be proud of you.”

And there it is. The truth he can’t run from.

Chuck breaks Chance’s gaze, swallowing hard in his throat. Just because they kissed that one time in college, that doesn’t mean Chuck isn’t straight.

He wonders if Marie knows that Chuck likes guys. Chuck doesn’t even know if he likes guys. Chance was the only guy he ever allowed close, like that.

The crickets around them chirp.

They’re more than a shoulder’s width apart but somehow it is claustrophobic. So much feeling. So many years lost. Time spent. And now just the two them. Sitting side-by-side.

“Do you ever think about it?”

“About what our lives could have been, if we didn’t have so much to live up to?”

The background blurs, faint dances of light behind them. Chuck turns to face him. They keep talking, but each line more a whisper. And then, eyes meet lips. And then, lips meet lips. 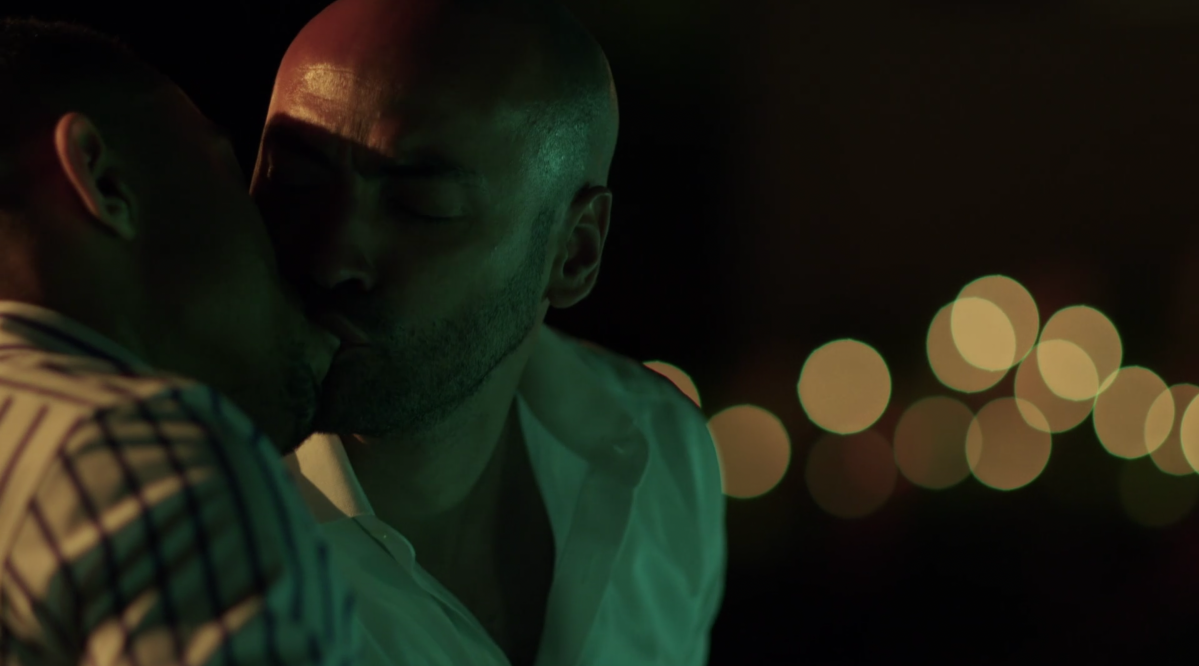 The camera pans out, Chuck and Chance locked together in the forefront. Chuck and Marie’s engagement photo still lighting up the sky behind them.

Chuck cries a single tear. That night, he goes home to Marie — who pretends to be asleep, even though she knows he’s been away. He’s been away this whole time. And so has she.

But are they really ready to deal with that?

+ My opinion that The Game is Mara Brock Akil’s best production is admittedly controversial, I assume most people pick Girlfriends.

+ In B. Scott’s post show they talked about non-binary identity and multiple times I couldn’t believe this was BET I was watching. It’s really stunning, how life comes at you so fast.

+ I’ve really enjoyed Ida and Hattie’s relationship moments in Ida’s bedroom, but it looks like next week Hattie’s gonna start picking up on the fact that Ida doesn’t want to be gay in public….

+ Friday Morning Update: It’s been brought to my attention that Hattie’s fake UPS uniform was named B.D.E., make of that what you will 🍆🍆

+ Amount of times I thought to myself that Hattie would be a mistake I’d gladly make:  3 (NEW RECORD! The fake UPS uniform, then again in the red flower suit coat, and one last time dancing with Ida in matching sweats and no I’m still not over it)

+ Amount of times I thought to myself that Ida would be a mistake I’d gladly make: 1 (very specifically the way she laughed and said “focus” simultaneously at Hattie while they played Jacks)

Carmen has written 499 articles for us.