Louisiana police are reporting that in an unbelievably extreme and horrifying act of violence, three people in Natchitoches Parish spent years holding a trans woman hostage and enslaving her, as well as torturing and sexually assaulting her. The captive woman escaped from her torturers on May 31, and on June 4th, David Rodriguez, Jr; Christina Marie Harper; and Ambre Lomas were arrested on counts of human trafficking, kidnapping/false imprisonment, battery, and for Rodriguez and Harper, offenses against computer users.

Only the basic outline of what’s occurred is clear. The victim appears to have met her captors online “around two years ago,” moving from Minnesota to Louisiana to live with the married couple of Harper and Rodriguez in what started out as a willing living arrangement. Later, the couple became her captors, forcing her to perform labor and tattooing a barcode on her, a photo of which they later uploaded to the internet. When the victim explicitly begged to be released a few months ago, her captors chained her outdoors. She was eventually able to escape in her captors’ vehicle. Ambre Lomas seems to have been a friend of the couple, and is also being charged in the case. 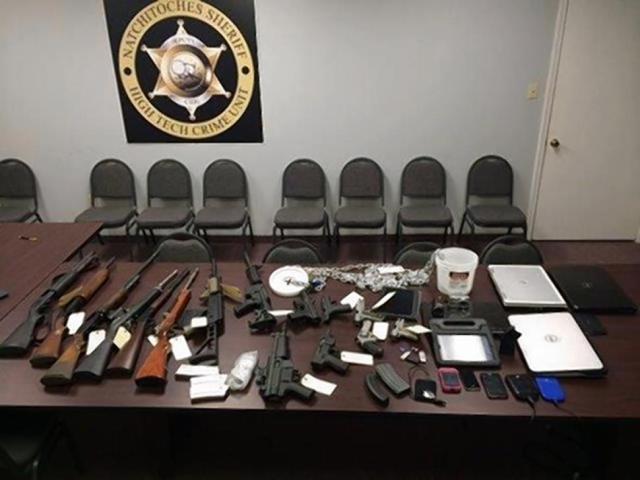 The firearms and computer equipment recovered from the residence.

The details of this woman’s experiences, even in the vague form of preliminary press releases, are truly unconscionable and unimaginable. After her escape, she was discovered by a town marshall near an interstate highway with a logging chain hanging from her neck. Nachitoches Parish Sheriff says that “In 30-something years of law enforcement in this area, this is probably one of the most gruesome deals that I’ve ever heard of, and I never experienced anything like it before.” In such a reprehensible case, it’s easy to agree that this case is an isolated one in its extremity — which is sort of true. The incidence of people held against their will, enslaved and tortured by a malicious conspiracy is low nationally. But the incidence of violence against trans women is incredibly high, and it’s likely not a coincidence that the victim in this case is trans.  As the Louisiana Trans Advocates and Equality Louisiana stated:

“The deprivation of freedom and basic human dignity demonstrated in this case serve as a reminder that things like this happen in the cities and parishes of our state and are far too often ignored by the media and law enforcement. It is not uncommon for transgender women to be subjected to violence that results in their death. LGBT people, people of color, women and many other populations experience unacceptable treatment on a daily basis. This woman survived, while many women do not.”

Nachitoches’ criminal investigator and forensic examiner suggests that the victim may have been disowned by her family due to her trans status, and adds that “suspects prey on people in this situation.” Violent predators routinely target people that they feel they can get away with hurting without consequences — people whose wellbeing our communities don’t prioritize, people who our communities tend not to believe when they say they’ve been hurt. While Harper, Rodriguez and Lomas are responsible for their cruel and abominable torture of a trans woman who seems to have at one point trusted them. But as a culture, we’re collectively responsible for devaluing trans women’s lives so much that predators feel comfortable targeting them, including many predators and many crimes more pedestrian than those that these three committed. This isn’t an isolated incident — not really, and we can’t talk about it without talking about the long history of violence against trans women it fits into.

all images courtesy of the Natchitoches Parish Sheriff’s Department