Every year, the BlogHer conference brings together a few very famous women, some kinda-famous women and thousands of not-famous women for 2-5 days of workshops, panels, speeches, free tote bags, performances and conversations about the world wide web we weave… together. If you’ve heard of BlogHer, through us or elsewhere, you probably think it’s mostly for mommy bloggers who hate it when you call them “mommy bloggers,” and, well, yes. That’s true. Most BlogHer attendees fit into that demographic. However that’s been changing over the past few years, and changing fast. Last year’s keynote lunch sessions featured Kerry Washington and Tig Notaro, and this year’s conference in New York was crafted with a declared focus on intersectionality — and features a keynote from Selma director Ava DuVernay.

As a childless 33-year-old socialist lesbian feminist who doesn’t know how to take a selfie and is probably wearing sweatpants right now, you wouldn’t necessarily expect me to get a lot out of an event like BlogHer — but I do. I even meet other socialist lesbian feminists (Hi, Deborah!). BlogHer is currently going through an EVOLUTION and CHANGE, with new owners and a more diverse group of presenters, and there’s never been a better time for you to be a part of it.

In fact, if you read this website regularly or have attended A-Camp, you’ve actually already benefited from BlogHer, but you might not even know it. So today we’re making you aware. 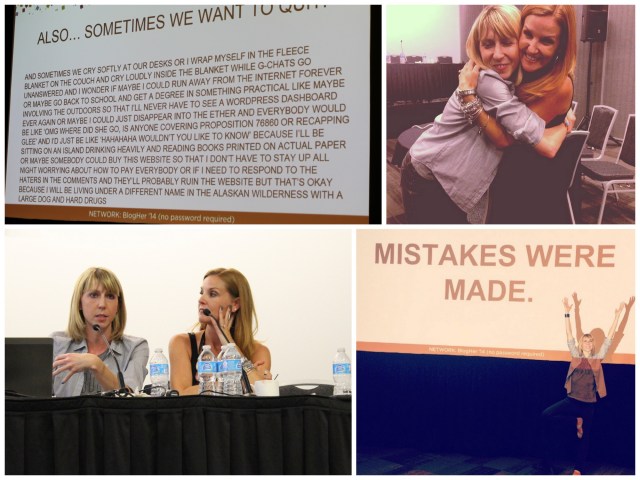 Often this job feels isolating — yes, I’m plugged in to a massive online network, we have a “virtual” office on slack, but I’m still, physically, one CEO alone in a room, hacking away in a relatively unexplored field of journalism and business. At BlogHer, I connect with other cavewomen. All of us are giddy out in the open air and eager to talk about our secluded lives. Although attending conferences always means catch-up work before and after, I’m invigorated by the opportunity to connect, and return to the site with new energy. 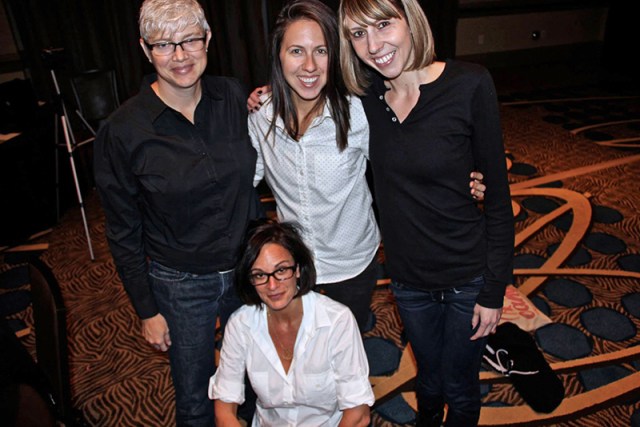 Before this year’s initiative to recruit queer mamas, our pool of mothers over 35 contained exactly one person: Vikki. Many use conferences like BlogHer to network and connect with lots of people — I prefer to spend obsessive amounts of time with 1-2 specific people, and Vikki and Deborah were my girls at BlogHer ‘11, although I met them IRL originally at a queer meet-up at BlogHer ‘10. BlogHer gives you a rare opportunity to connect face-to-face with people you usually only see behind a screen, and these connections can enable things like Fosters recaps and essays like this and this. 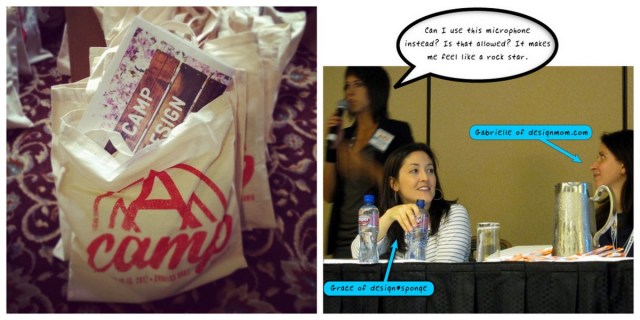 Alex met Grace at BlogHer ‘10 on the panel they chaired on “The Role of Layout in an Online Medium.” What came out of that? Well, y’all got copies of Grace’s Camp Newspaper at September 2012 A-Camp… and her and Alex stayed friendly, which meant we were adequately prepared for  Grace Bonney’s coming out announcement in June of 2013.

You know the part of the A-Camp description where I say that we cherry-picked what we liked about other LGBT and women’s events and conferences and used that to build our own woodland retreat? Yes. BlogHer was one of those events, and its overwhelming success helped me believe that there was a chance our man-free event could also thrive. (BlogHer does have some male attendees, presenters and writers, but is still a lady-focused event.) 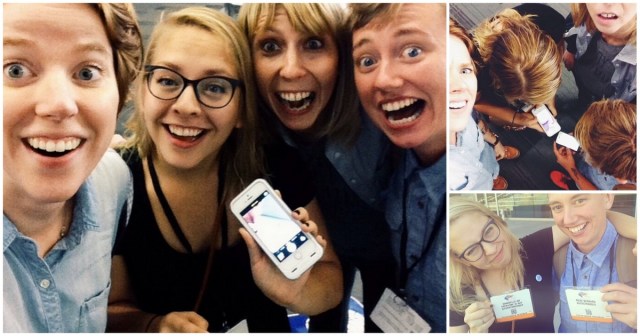 Although I’d met Kristin Russo and Dannielle Owens-Reid when we did a panel together at NYU and we’d collaborated on several things prior to BlogHer ‘14, it was at BlogHer that I became actual friends with Dannielle and also Julia Nunes, her girlfriend who just-so-happens to be a wildly successful musician with a passionate queer following. Dannielle and I both led all-day Pathfinder sessions, our girlfriends pursued shenanigans and between exploring San Jose, attending keynotes and walking five miles to a sushi restaurant, we sold them on A-Camp. If you attended A-Camp 6.0, I think you can easily confirm that this was a serendipitous situation. BlogHer: giving you an excuse to spend three hours talking to a colleague you’d never have time to call during your normal working life since 2006.

6. It Got Us Talking About Turning Your Passion into a Business

I left my all-day pathfinder workshop at BlogHer ‘14 determined to do something similar at A-Camp — something that’d leave campers with the same practical skills and ideas we provided our workshop attendees. That panel also became a post, which you read, or if you haven’t read, you should read.

You know how reading an entire book can be worth it just for one killer line? Although the BlogHer 2011 “Success On Our Own Terms” panel was filled with valuable information from the Huffington Post editors who were on it, one bit of advice stuck with me even years later. Talking about juggling work and personal time, a panelist admitted her own daughter had called her out for “always working,” and though she initially felt defensive — she wasn’t REALLY working, after all, she just had her laptop on and was doing little things while hanging out with her daughter — she realized that 1) she wasn’t always working, 2) she WAS always KINDA-working. After a long day of work, she’d come home and ambiently work while doing other things. Acknowledging this and committing to either devoting my entire attention to working or my entire attention to not-working seriously changed my life and made my work much better.

8. We Got Well Versed In Smart Sponsorship 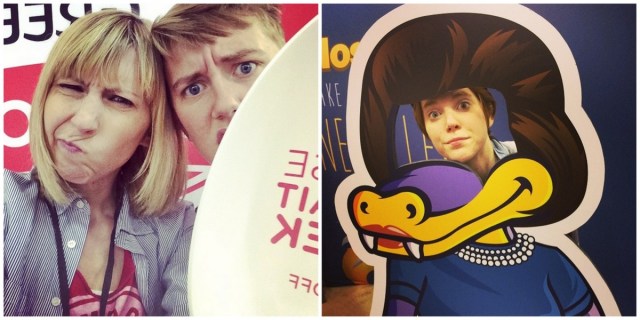 It’s not a secret that BlogHer conventions feature many sponsors (and so much fun swag!), and I talked with lots of bloggers who paid their bills through their own brand partnerships. Although I realize how meta it is to say this in a sponsored post, BlogHer actually helped me figure out what kinds of sponsorships don’t work for us. Hearing other bloggers talk about how they passionately endorse products we’d have to lie to endorse with similar enthusiasm made it “click” that wringing our hands over said product’s disinterest in us was a waste of time. Instead we’ve focused on partnerships with brands we can honestly endorse, and even were inspired by BlogHer’s “Life Well Lived” campaign with P&G to model our campaign with o.b. tampons.

9. You Got Autostraddlers at Your University

Now that I’ve been on so many panels for A-Camp and at various universities it seems inconceivable to me that I was so nervous before my BlogHer 2011 panel that I had to sneak in a vodka tonic right beforehand (nobody could tell, I promise). But I was. I’m not sure why — I’d been on panels before and enjoyed it immensely, but never as an Autostraddle representative at a professional place like BlogHer! It went exceptionally well, and high on that success, I did panels and presentations at several universities within the next year, and planned a panel-heavy A-Camp. Maybe you were there. Maybe you bought me a drink (AFTER the panel, of course). BlogHer inviting Alex to panel in 2010 and me in 2011 made us feel, finally, legit — and we have friends like Deb Rox to thank for that, as I imagine her to be a queer wizard magically inspiring other queers to be seen at BlogHer for years.

The morning I left for San Francisco from San Diego after BlogHer 2011, my fellow panelist Julia Roberts told me to “own it.” We were sitting by the pool at the Marriott with a bunch of gay-lady blogger-buddies, eating breakfast burritos wrapped in soggy sheaths of foil, and she goes to me, “You act all like” [imitating me] “Oh I don’t know, I just started this website and now it’s big and popular and a-ma-zing, I guess it just like happened?” [being herself again] “You have to own it. Own it. You did this. You made this happen. Own it.”

“Right,” I said, in a voice I imagined a captain might use to reassure his crew that he knows how to avoid an iceberg even though he really doesn’t.

“No, you have to own it. Own it, girl! You knew what you were doing. It didn’t just happen.”

So I kept trying to experiment with that idea, this idea of “owning it,” of “acting as if,” despite the cranky self-loathing adolescent in my gut with a raging sense of imposter syndrome that spreads virus-like through my body.

But Julia was right. Women especially are prone to imposter syndrome, to feel like what we’re doing is frivolous or inadequate. But BlogHer gives us a chance to come together and feel legit. Because we are.

You could win yourself a ticket to #BlogHer15!

So here’s what you do! Instagram a picture that says something important about you. Tell us about it in your photo caption and include the hashtags: #knowme, #BlogHer15, and most importantly #autostraddle. You have until June 23rd! We’ll pick a winner via Instagram on the 24th. Get it, y’all! 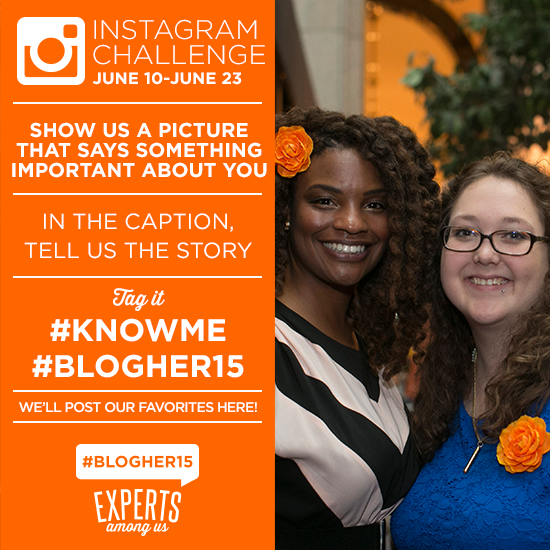