Has there ever been a better time for jumpsuits than this exact moment in human history, when jumping and suiting are both incredibly popular queer past-times? Wow, there has not! For example, have you seen Showtime’s hit series The L Word: Generation Q? I have, and I can tell you right now that every main character except Shane and Micah wear at least one jumpsuit at some point during the season. All in all, we counted ten jumpsuits. Because fashion moves fast and the show filmed some time ago, most of the actual jumpsuits worn on the screen are no longer available (and most were pretty expensive anyhow!) but in some cases, I could find something similar to feast your thighs upon. Hot tip: If you’re into this, you’ll probably also be into this interview I did with the Costume Designer of Generation Q! 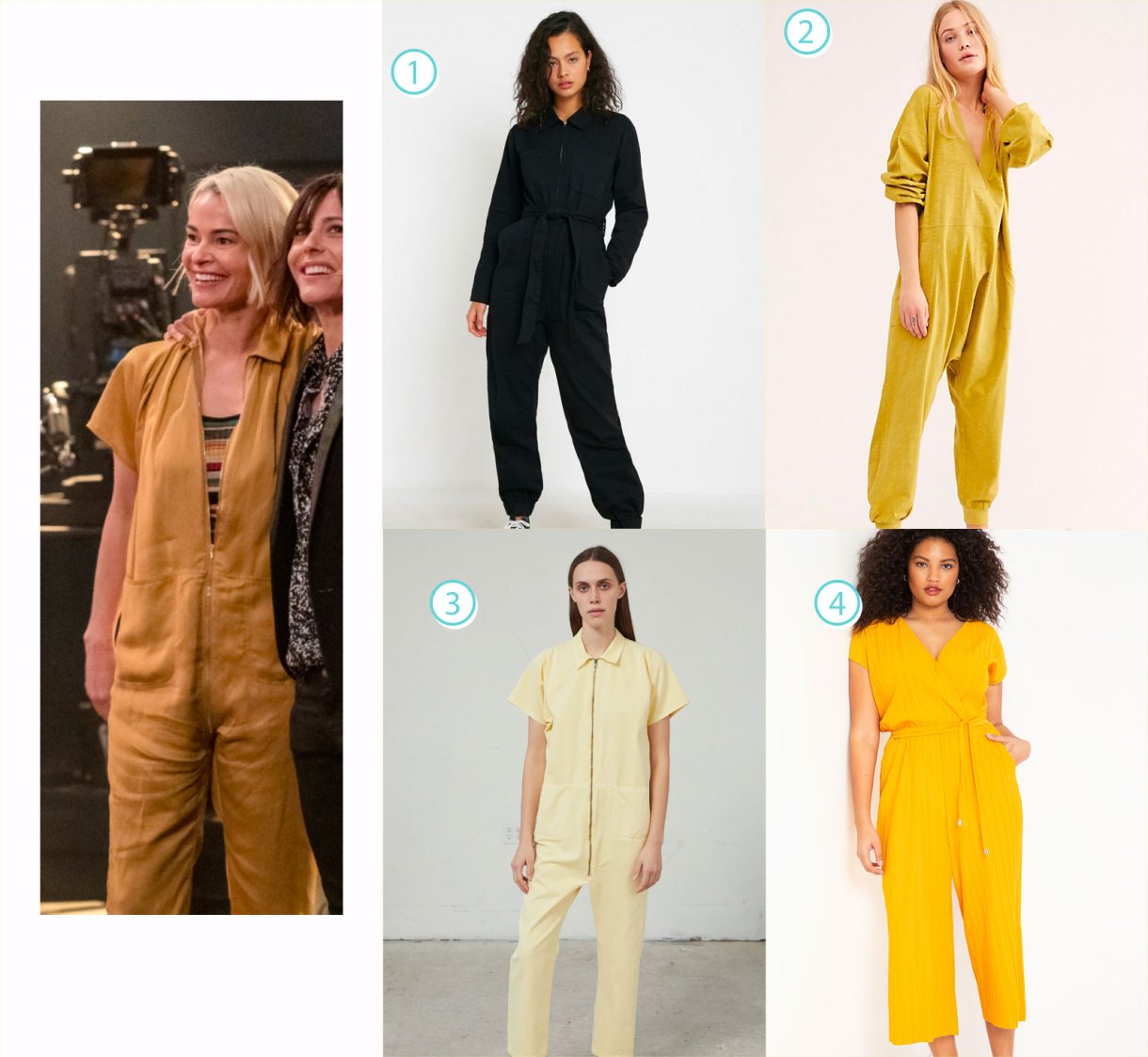 The very first jumpsuit to appear in Generation Q is Alice’s Rachel Comey Barrie Jumpsuit in a striking shade of gold. The jumpsuit is cotton with a zipper front (which she unzips slightly to reveal a striped tank top underneath), a collar, front pockets and a boxy cut. This jumpsuit style is still available from Rachel Comey for a cool $450, but not the specific color Alice wore. On their own, these elements are easy to find. All of them together? The color, the slouchy boxy cut, the material, the pockets, the zipper, the collar, the short sleeves? Impossible to find! So I settled for a few jumpsuits that were only vaguely reminiscent of the original.

The Kate Twill jumpsuit from plus-size retailer Universal Standard, pictured in our next jumpsuit collage, is also VERY close in spirit to this one. 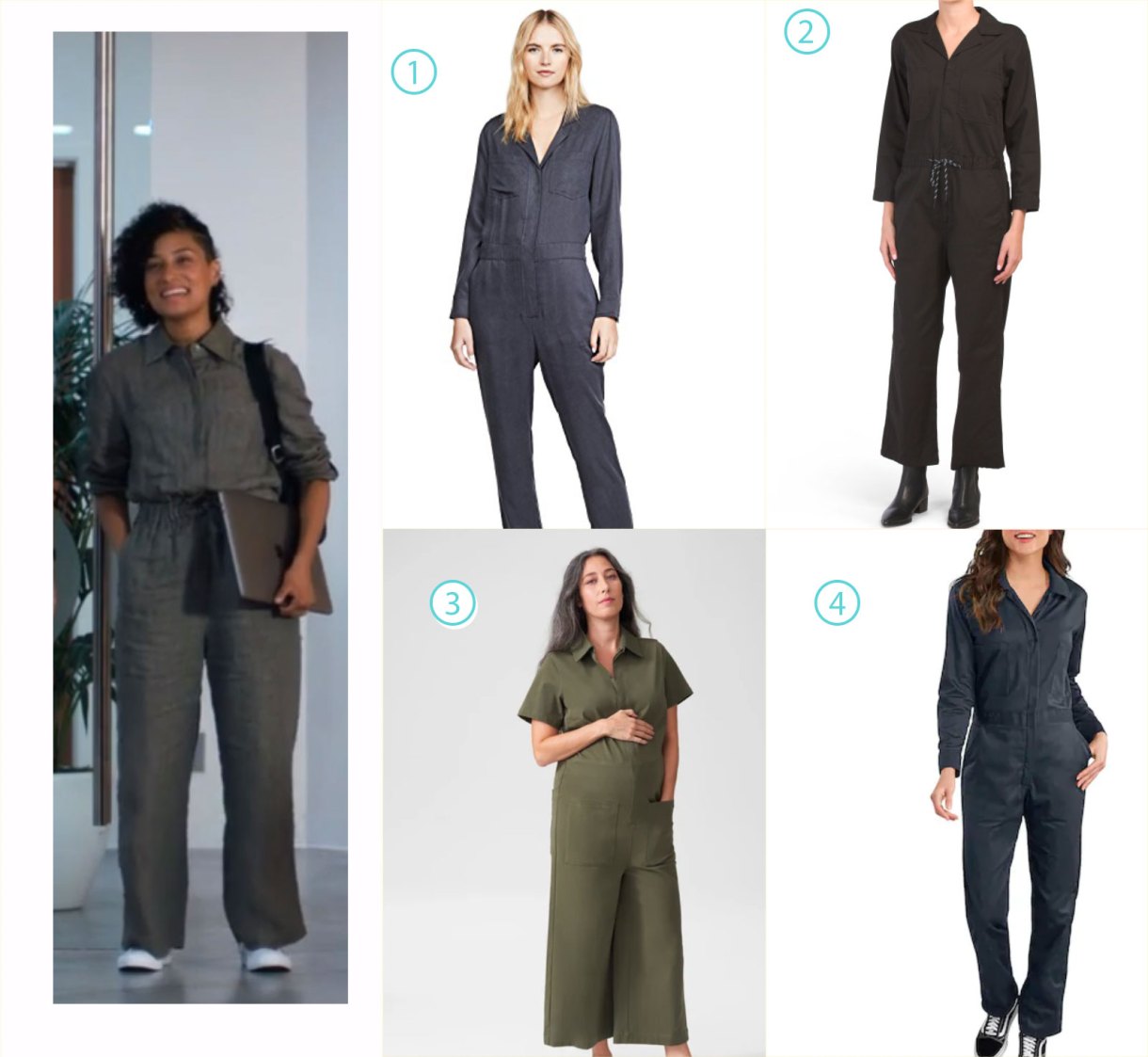 Sophie wears a grey button-up boilersuit-style jumpsuit to her job at The Aloce Show. It’s a long-sleeved number (although Sophie keeps ’em cuffed up throughout) with an elastic drawstring waist and straight leg. Who made this jumpsuit? I don’t know! Is it really grey, or is it dark green? These are the mysteries of life that we may never be able to answer. 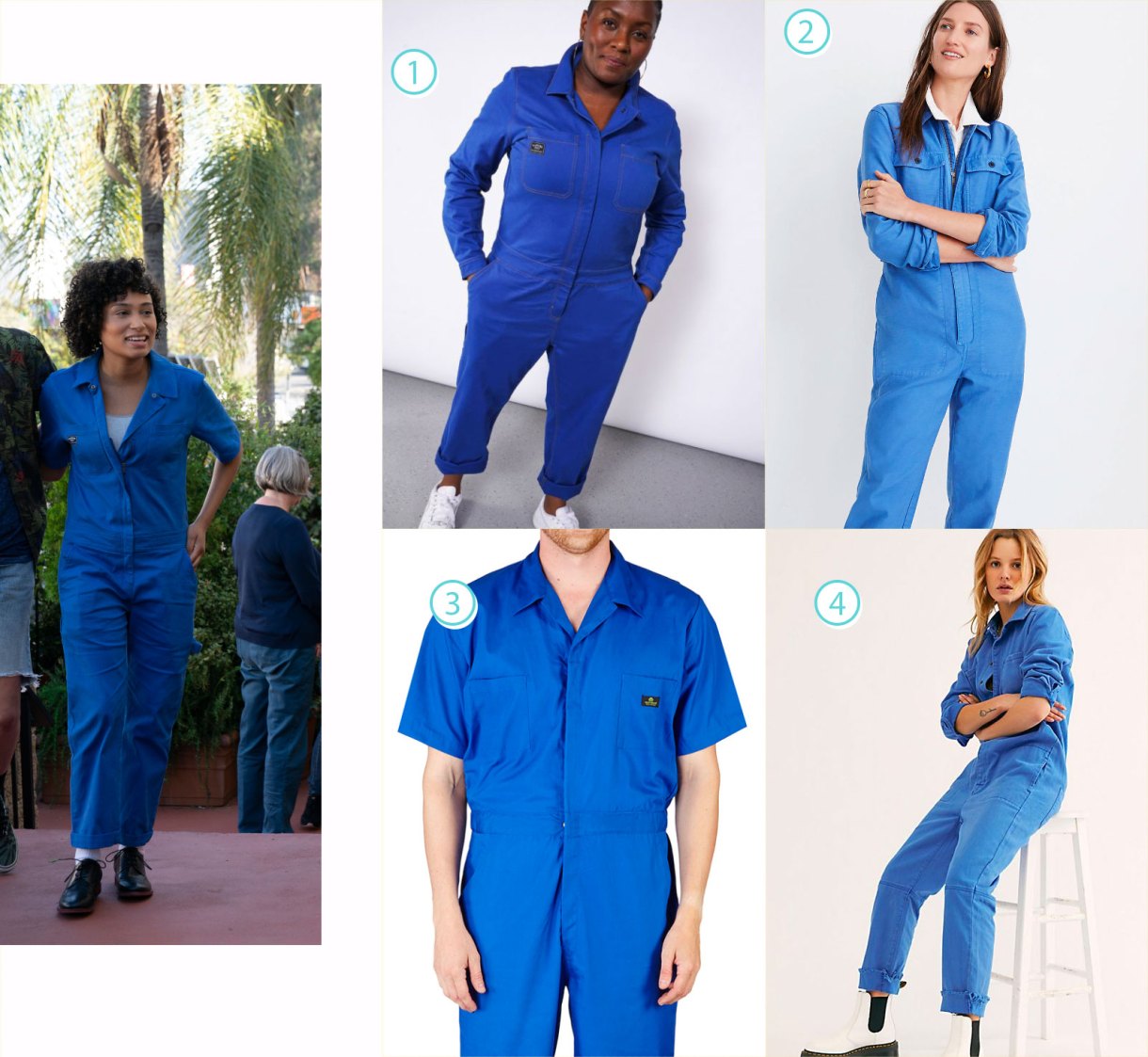 Wildfang’s signature coveralls appear not only in the episode but also in promotional photos and on the bodies of its cast and crew at public events! These workwear-inspired classics boast pop stitch detailing and the tell-tale Wildfang logo patch on the front breast pocket. By wearing these to work, The L Word: Generation Q is sending a message to workplaces everywhere: coveralls officially count as business casual. You’re welcome! 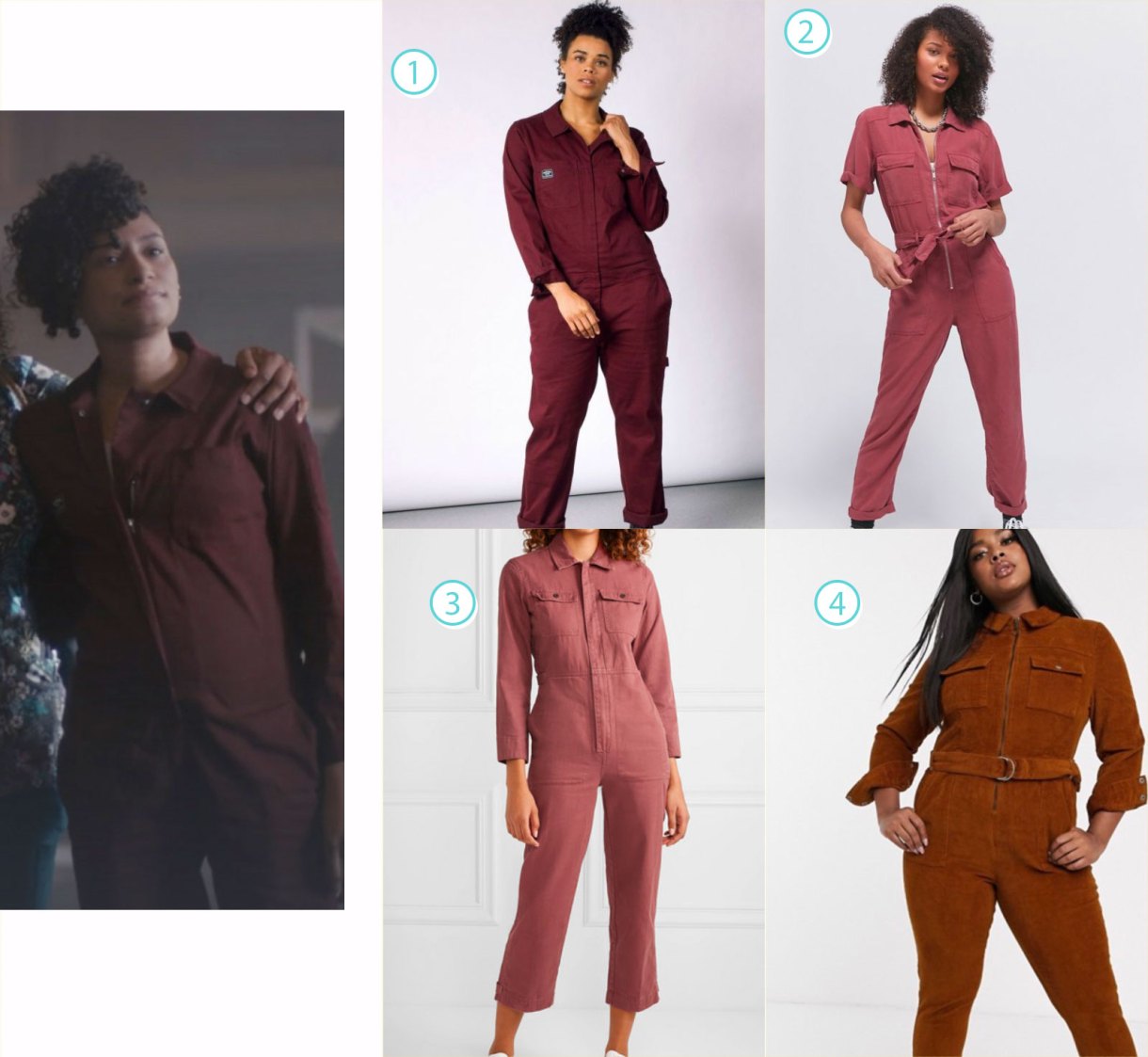 Wildfang’s website claims that “you’re gunna want more than one color” of its coveralls and it looks like Sophie definitely took that suggestion to heart, wearing a Pomegranate Wildfang coverall to her family’s grand tour of the Fancy Wedding Ballroom Daddy Already Put a Deposit On. 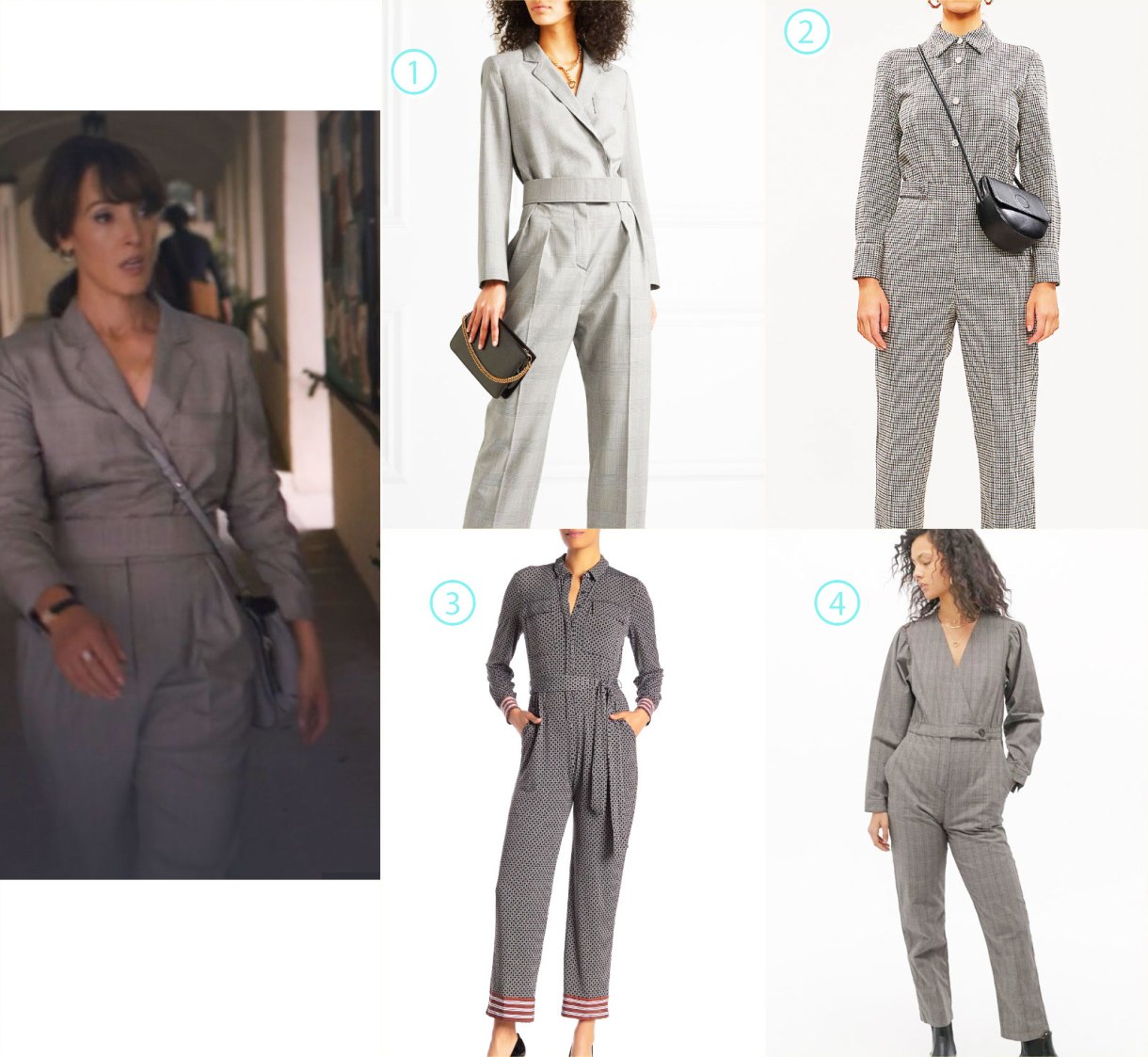 Bette’s wearing this when she picks up Angie from school after Angie gets in a fight with a truly terrible tween. This strong-shouldered Max Mara jumpsuit is made from 100% black and white wool with classic suiting details like pressed creases, notched lapels, a chest pocket. It’s a unique design with the kind of detailing you can’t really find on lower-end pieces, but being Bette Porter is obviously a very expensive life path. 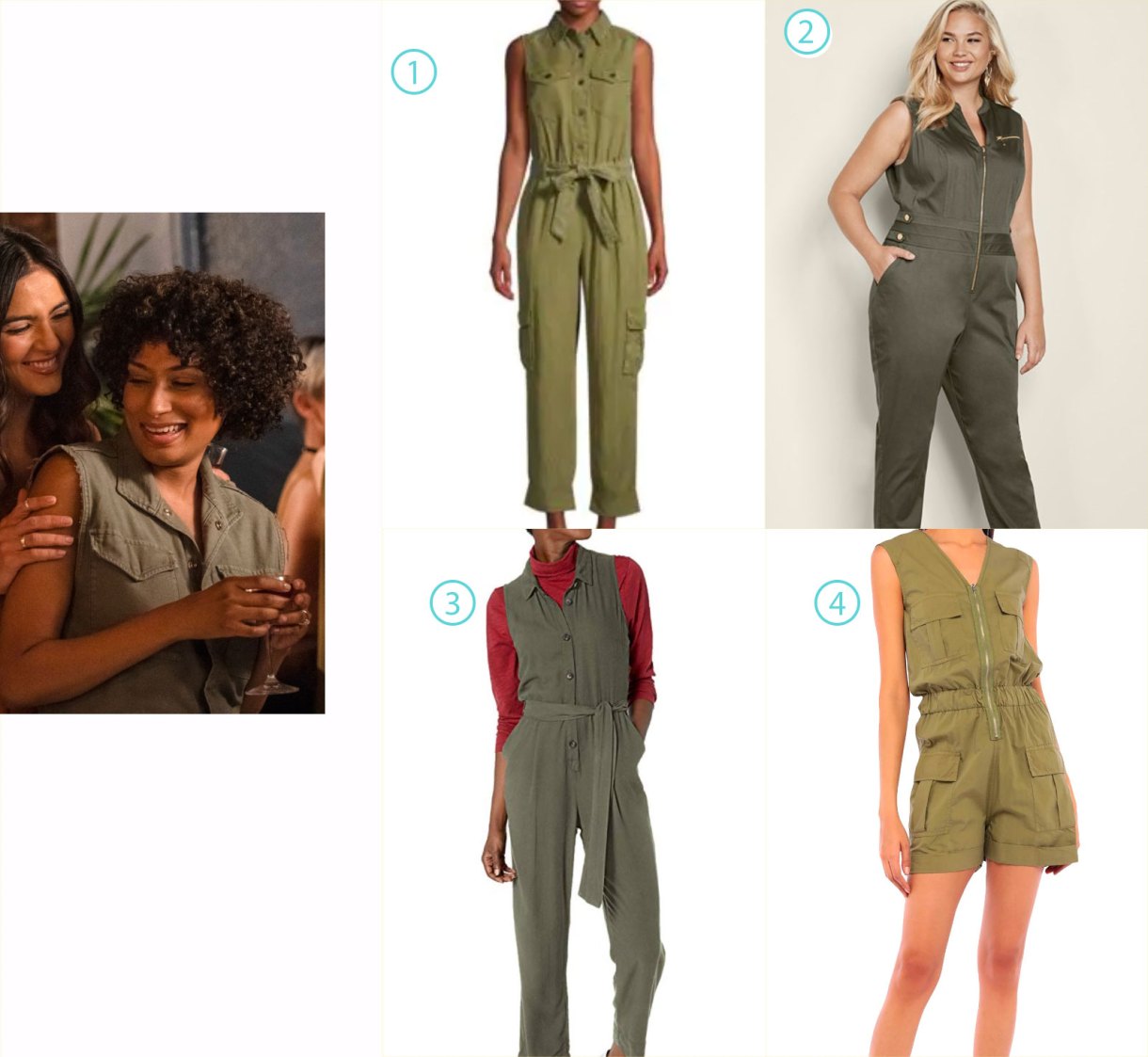 We never see the bottom half of this jumpsuit in full — we catch a few glimpses as Sophie interacts with Dani, and see Dani’s hands grazing Sophie’s ass as they dance at Shane’s 40th Birthday Party. What we know is this: it’s a damn jumpsuit! This style is a lot easier to find in long sleeve. 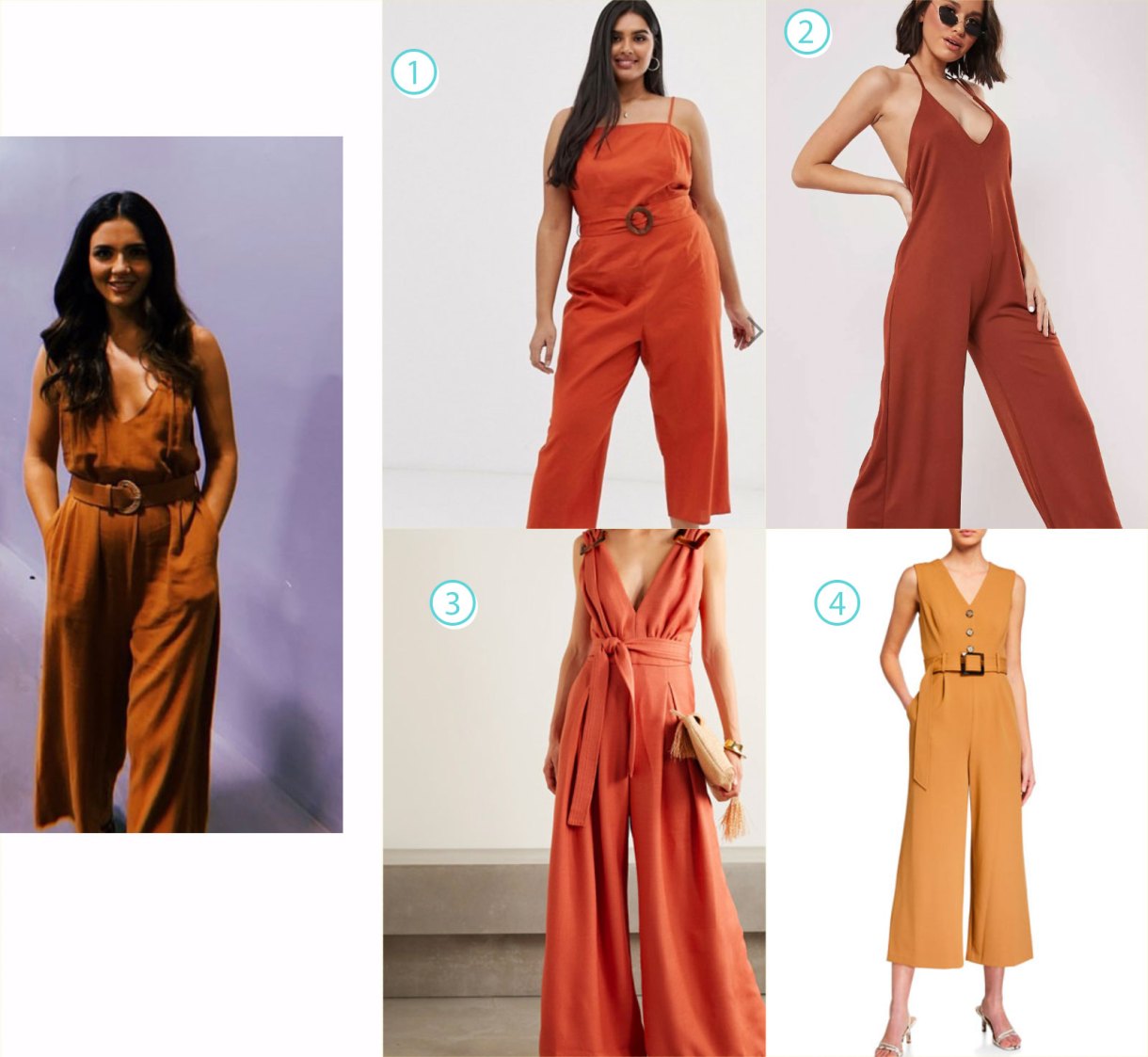 Both members of this terrific twosome arrived encased in jumpsuit to Shane’s 40th Birthday party. Dani’s jumpsuit is hard to see in the show itself, thus the BTS photo from @shandzee standing in for a fuzzy screenshot in the above graphic. This situation is very wide-legged with knotted straps leading to a deep v-neck and a thick belt encasing its middle. The ensuing sexy drunken dancing in this scene reveals that there is lots of room in that top for side-boob. I think this is probably the most important element of this jumpsuit. I could find absolutely nothing like it. 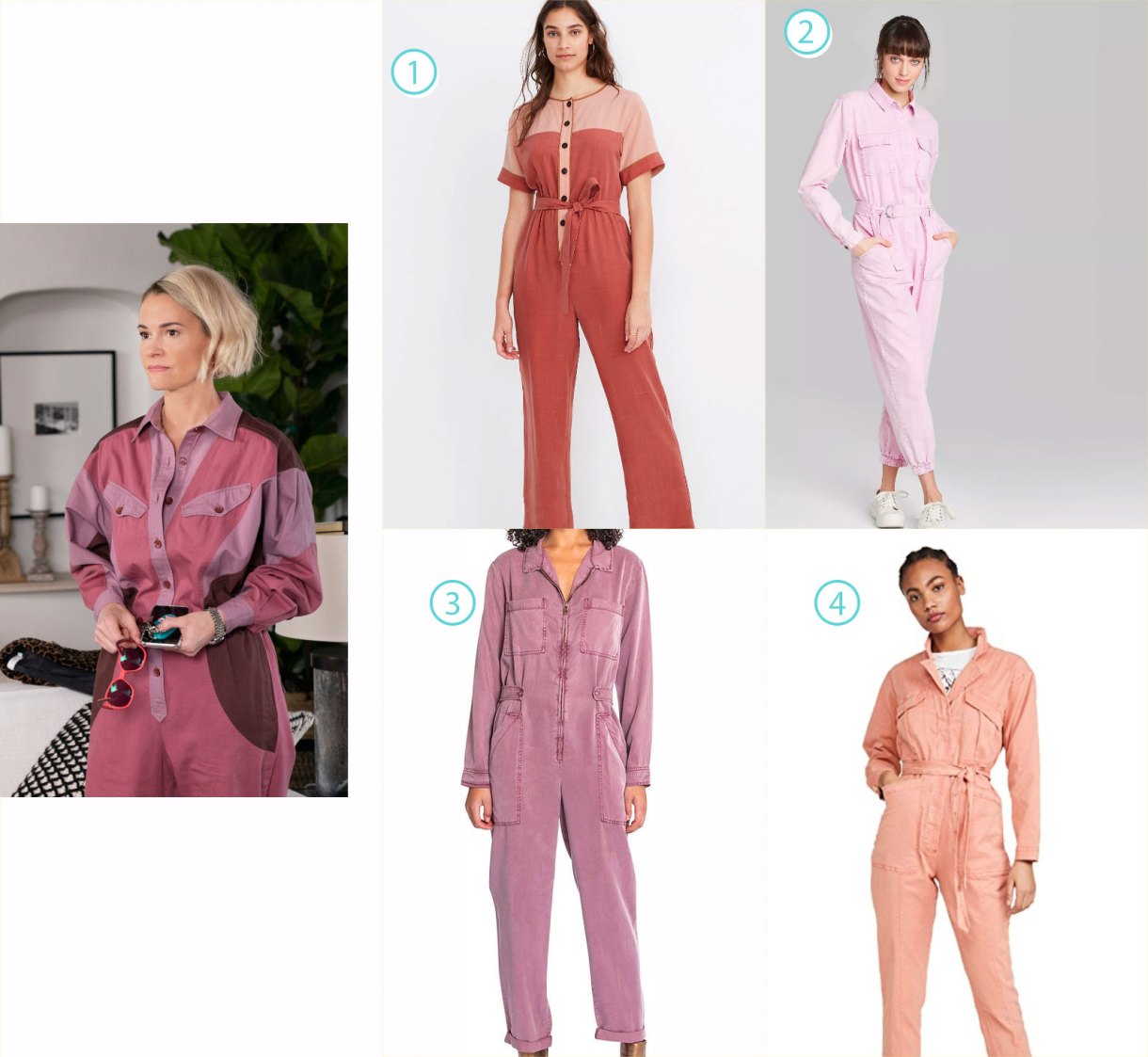 The jumpsuit Alice wears in her Aloce Show promo photos makes a live appearance as Alice battles the paparazzi on her way to be very mad at Bette. This $455 jumpsuit is a truly unique piece — not only is it sold out, nothing else like it exists out there, at least not this season. Perhaps we’d all have better luck at a thrift store. 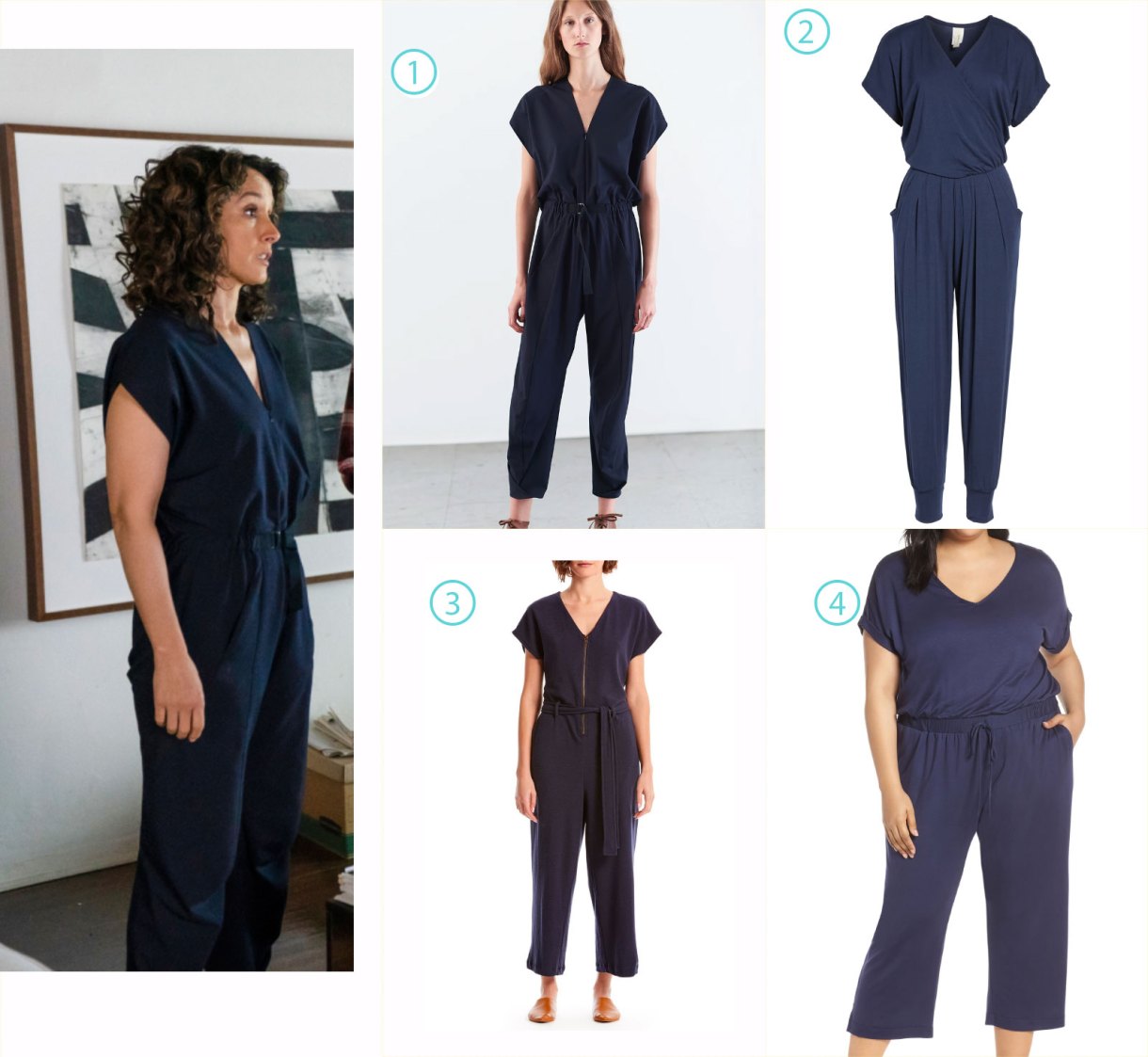 Bette spends the entire episode looking amazing in this woven jumpsuit from Maria Cornejo that features a draped v-neck, short-sleeves, front-zip closure, a gathered waist with belted detail, front POCKETS and draped legs with angled-pleat cuff detail. It can be yours for a mere $895! Everlane has a long-sleeve jumpsuit in black with a similar spirit — the same v-neck cut and side pockets, but without the gathered cuff. Drawn to the tapered hem and loose fit but apathetic about sleeve length? Try this guy from Urban Outfitters.