+ In a speech for the Trevor Project Live, Rosie Perez revealed that she had a lesbian relationship in junior high school, which makes her luckier than most of us. “All I wanted to do was hump her. And I suppressed the urge and suppressed the urge and suppressed the urge until Michelle one day started humping on me.” Perez says she is not “lesbian, gay or whatever” but rather “quasi-straight,” and that she wishes she’d had somebody to talk to during her relationship with Michelle, like The Trevor Project: “If I had other people, specifically adults, if I was just able to call up and they said, ‘Oh, I humped the Michelle-type person, too. You’re normal, don’t worry.”

+ Andreja Pejic is one of the faces for a new Makeup Forever campaign, marking the first time a transgender model has starred in a major cosmetics campaign!

+ The Hollywood Reporter did an amazing hilarious brilliant roundtable with a powerhouse assortment of female comedians including Kate McKinnon, Gina Rodriguez (Jane the Virgin), Elie Kemper (Unbreakable Kimmy Schmidt), Lena Dunham (Girls), Tracee Ellis Ross (Black-ish) and Amy Schumer (Inside Amy Schumer). Even if you hate Lena Dunham, you’ll enjoy this because it is funny and interesting and they talk about racism and sexism and misogyny and sex onscreen and everything! Kate McKinnon doesn’t talk as much as the other women but she talks about playing Hillary Clinton and Justin Bieber and stuff. Also, this:

Hollywood Reporter: What’s the biggest fight you’ve had about money?

KEMPER: I’m not powerful enough to have that fight.

MCKINNON: I’ll work for a hamburger.

MCKINNON: I just want to be onstage. And I want a hamburger.

+ Apparently my girlfriend and I have been kicked off the throne because it seems that Ruby Rose and Phoebe Dahl are the Ultimate Power Couple.

Orange is the New Black

+ The Nice Guys™ of Litchfield: “Orange Is the New Black” dives into toxic male entitlement: “In its third season, Orange Is The New Black offers up not just an array of male experience, but an array of male frailty; the subversive mission of the show finds ways to lay bare the strength of its women as it exposes the weaknesses of the men. And over and over, what lies at the heart of the men it explores is a stubborn entitlement that makes itself known in a variety of ways.”

+ On the off-chance that you’ve not already taken fifteen of these, Variety has a quiz on which Orange is the New Black character you are. I have bad news for you though: you’re not an OITNB character. You’re you! You’re just you. Who you are is exactly who you are, and you should thank you lucky stars that you’re not in prison because prison is terrible. That all being said, I obviously got Poussey. Hey-o!

+ Some theories about why some of the shots in Orange is the New Black look green-screened even though they aren’t.

+ The actor who plays Bennett explains why Bennett left and, in so doing, draws attention to the fact that I clearly misread his last flashback.

Well, speaking of trust issues, there are tough decisions that Officer Bennett is coming up against with Daya and the baby on OITNB. This is a guy who’s seen war, but now he can’t stick around for his baby mama and baby?
Well, yeah, that scene is pretty heavy. The flashback is analogous to what ends up actually happening with Bennett and Daya. Here he is, he’s in battle, he’s talking a big game, but when it comes down to it, the other lower-ranked guy jumps on the grenade as Bennett goes and runs. I think it’s sort of who Bennett is: He wants to be the hero so bad, and he tries but falls short. It’s pretty tragic, but there is some part of me that thinks Bennett believes he was doing the better thing by leaving. It allows Pornstache’s mother to step in, it allows other things to shift. I mean, if you think of it, that relationship has been a ticking time bomb since the beginning.

+ The Shark Week schedule is here! 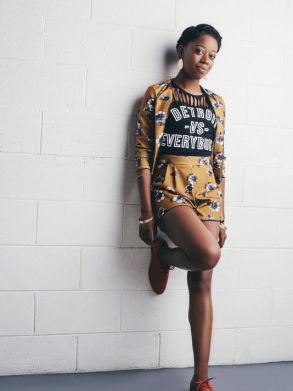 + There’s a new TBS sitcom, Clipped, with a queer character played by a queer actress! Her name is Diona Reasonover, and AfterEllen talked to her about the show, getting started with acting in Detroit, and more:

AE: So was your character written as queer or did they change it after you were cast?

DB: I don’t exactly know. [Show creators] David Kohan and Max Mutchnick are very interested in our voices, too, so they wanted to—they did a really great job of talking to us and there are little things that are in there that are really us. It wasn’t in the pilot because I don’t know that it was necessarily germane to the pilot, but when I found out that they were writing it in, I was like, “Great, awesome!” I think she just is who she is and her being gay isn’t necessarily a plot point or an attempt to get ratings or an attempt to pull in a certain audience. It’s jut who she is. Like I’m queer in real life, it’s just who I am.

+ Haven’t you always wondered who Entertainment Weekly’s 25 Favorite LGBTQ TV Characters are? Well you can put down that tampon, your time has come. Three cheers for Shane, Sophia Bursett, Willow & Tara, Jamal Lyon, Omar, Ricky Vasequz and Jack McPhee! Unsure why they included the legendarily transphobic The Crying Game and legendarily biphobic Basic Instinct but hey, it’s not a queer website so probably none of their readers will yell at them about it.

+ How Pixar came up with a whole new way of showing a child’s mind in Inside Out.

+ Big Brother has cast its first transgender cast member, Audrey Middleton. I’m sure her portrayal will be really respectful and honest and heartfelt, just like I imagine the show itself to be. HOW IS THIS SHOW STILL ON? I don’t think I’ve known anybody who watches it. Do y’all watch it? Tell me about this situation.

+ Lifetime has green-lit a show about Beverly Hills 90210 and I CAN’T WAIT. Remember when Gabby live-blogged the Saved by the Bell movie? That was incredible. But the movie was terrible, as this one is sure to also be.

+ Investigation Discovery’s Secret Formula For Keeping You Tuned In All Day, from AdWeek

+ Wolfe Releasing has acquired U.S. distribution rights to the gay male teen drama Naz and Maalik, set in Brooklyn and described ” an intimate exploration of the daily lives of two closeted Muslim teens who have their secret lives rattled by FBI surveillance.”

Special Theme Park Section Because Sure

+ Here’s some pictures of abandoned theme parks! I want to go to all of these and take photos. I wonder if Boblo Island is in that book.

+ 15 Secrets of Disney Park Characters: “Princesses, on the other hand, usually occupy the short-to-medium range—Elsa and Anna from Frozen, Rapunzel, and Jasmine are all listed at 5 feet 3 inches to 5 feet 7 inches. Characters who are supposed to be children, such as Wendy from Peter Pan and Alice from Alice in Wonderland, are more petite, and a casting call for Tinker Bell requests actresses be 4 feet 11 inches to 5 feet 2 inches. Villainesses, however, are taller and more imperious: Maleficent can be between 5 feet 9 inches and 6 feet, and Cinderella’s stepmother and the Evil Queen from Snow White are expected to be between 5 feet 8 inches to 5 feet 10 inches. “