riese: we need to publish SOMETHING else today
i’m in the middle of like four different posts and five other things
laneia: i can have a team pick
riese: ok

riese: there’s like a few things i feel like we should talk about, but they’re all dumb, like a handful of dumb things have happened:
1. lindsay lohan got out of jail
2. lady gaga is on the cover of vanity fair, she talks about her vagina
3. brittany and santana confirmed further exploration of their lesbionic relationship for the next season of Glee
laneia: make a post titled “Top 4 Headlines Queers Are Talking About Today”
and just list it like you did there in the chat
with a link
like it’s their notes for the day
riese: ok
also sidenote haven’t started the real l word recap yet
laneia: the recap should just be that mikey yelled, jill/nikki’s chandelier fell, rose’s gma is sick and we’re led to believe that she cheated on natalie and then jess’s interview w/ romi and THAT’S IT.
oh and how much we want to cuddle tor.

1. LADY GAGA HAS THE POWER OF THE CLAM: 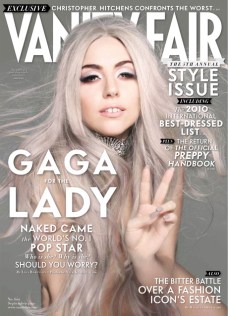 Lady Gaga is on the cover of Vanity Fair’s September Issue, where she talks about our favorite subjects, vagina and xanax. If you want to read the whole thing without leaving your house while cheating the publishing industry out of its $5.95 so that you can give it to us instead, you can read the entire piece at ONTD, obviously.

On The Real Los Angeles:

“I hate Hollywood. I got rid of my place [in Los Angeles], and I’m coming back to spend more time in New York. Everyone in Hollywood is so awful, and awful to me; everyone just wants you to fail. There’s no fervor for the fantasy of music anymore. It’s all about No. 1s and who’s on iTunes, and [while] I’m on iTunes and I’m No. 1, I still care about the fervor of show business and music and womanhood.”

On Sex! Lisa Robinson writes, “Much has been made of Gaga’s self-proclaimed, occassional bisexuality. She alludes to faking it with men in her ‘Bluffin’ with my muffin’ lyric in “Poker Face”… Now, she tells me”:

“I don’t really have sex. Well sometimes. But I’m drawn to Bad Romances… my relationships with my gay friends have a purity and love that’s so simple because we don’t want anything from each other except friendship. [Whereas] my relationships with straight men are always abusive, always tumultuous, always emotional. I do fuck, but I’m certainly not promiscuous.”

“I have this weird thing that if I sleep with someone they’re going to take my creativity from me through my vagina.”

Her whole reason for living:

“I love my fans more than any artist who has ever lived, and I mean that so genuinely. I’ve looked every man that I’ve ever dated in the eye and every woman I’ve ever been friends with and there will never be something that I put before my fans. It’s about loving who you are. I don’t want people to love me; I want them to love themselves.”

On wanting to be crazy:

“Something inside me felt like I was living in a delusional world; I wanted to  know what the real world was all about. And I used to pray every night that God would make me crazy. I prayed that God would teach me something, that he would instill in me a creativity and a strangeness that all of these people that I loved and respected had.”

“I have anxiety, and it’s so funny… this morning I was placing the [Xanax] in my hand and I said, ‘I knew this day would come.’

2. LINDSAY LOHAN GETS OUT OF JAIL AND GOES TO REHAB! 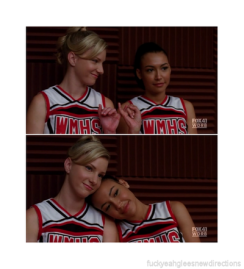 At the Beverly Hilton Hotel last night for the annual TCA Awards, Trish Bendix got the scoop w/r/t Santanna’s next season on GLEE, which we have helpfully copy-pasted for you:

After the short ceremony, I introduced myself to Naya Rivera, who fans will know plays Santana. I asked about the comments made at Comic Con last week and she laughed.

“The one where [Heather Morris and I] make out all the time?”

She didn’t expand further on this, so I will give some of you some everlasting hope that this is true. But what about the episode that could include the BFFs kissing on screen?

“I don’t know,” Naya said. “We never know until we get the scripts and I kind of like it that way!”

She seemed very psyched to have lesbian fans that are pulling for her and Brittany. I also asked if she knew of any romantic interests she would be having this year — aka “Don’t even tell me they are trying to pull you away from the only lesbian thing we have on this show.” Naya had no idea. Ryan Murphy leaves them in the dark.

So, of course, I went straight to the source. Ryan, what’s the deal with that kiss?

“We’re filming that episode on Monday,” he told me — and he said there will definitely be a kiss between them. “Maybe more.”

I told him how much lesbians like the storyline and he said, “Really? Then I need to put them in there making out all the time so people can get used to seeing it.”

As AUTOSTRADDLE reported ON JUNE F*CKING 4TH, WEEKS before anyone else in the entire universe, there will be a lesbian character at the center of the US version of Skins. The cast of the show will be announced on Thursday August 5th.

Heather Hogan caught up with Skins co-creator and adaptation leader Bryan Elsley for more and he said:

Skins hasn’t “lost” a gay character, since lesbians are gay too, last I heard. Those who saw the first series of Skins might remember that poor old Maxxie was hardly in it. He only came into his own in series two. This new character (Tea) is going to be at the center of everything right from the get go. And, of course, there will be a range of textured gay characters, both male and female, right from the beginning of series one.

If Bryan were forced to sum up Tea in a few words — though let’s be fair: you can’t box-in any Skins character in just a few words — he would call her “messy, challenging and hopefully fascinating.”

Making the leap across the pond and introducing a new lesbian into Skins-verse so soon after Naomily hijacked the hearts of the whole world is a brave move indeed. In our first conversation about Tea, Bryan said, “I better not screw it up.”

Bryan tells me that, as with all Skins characters, Tea will also be rounded out with input and writing by authoritative, young female voices. (Maybe even by a lesbian recapper you’ve grown to know and love.)

I liked this story, it’s called Mad Men: The Allure of Messy Lives, which claims that “the phenomenal success of the show relies at least in part on the thrill of casual vice, on the glamour of spectacularly messy, self-destructive behavior to our relatively staid and enlightened times.”
Also, Clueless At 15: Appreciating A Failed Field Guide. Also, in Stephen Tobolowsky: The X Factor, Part 1, Stephen Tobolowsky (Glee! Heroes! Thelma & Louise!), writes about “auditions, Memento and the thrill of trying out for characters named “Masochistic Gay Man.”