Good afternoon, sassy readers. Keep it up, we dig you all. This week we had some more poetry. The opposite of LA Fashion Week, Autostraddle Pure Poetry week is the song that doesn’t end. During this week of the week, we had Jeffrey Mcdaniel, Dorothy Porter, and Sylvia Plath. In Musicland, we had a quick conversation with Hesta Prynn and Crystal talked about 2011’s most awaited albums. No one talks on the phone to anyone but their mom anymore because we’ve all got computers, especially Miss Tech Taylor who reviewed the iPad 2. Lots of gay shit happened on teevee and Riese made jokes and an excellent headline about it. If you’re going to Dinah Shore, don’t leave without reading our packing list or reading about Amber Elizabeth who plays football and is going to be there.

On The “Lesbian Until Graduation:” Now A New York Times Most Emailed Article!:

The HUG Award to annotations: “and me. Specifically, I feared that maybe I just wanted to experiment and so I didn’t because I was afraid of finding out that I was wrong and then having to label myself just an attention seeking difference craving asshole.
Um but no. totally gay. college/high school me was so so dumb.
I just don’t like to be wrong and this one backfired? eh.”

The At Least It’s Spelled Right Award to queermo: 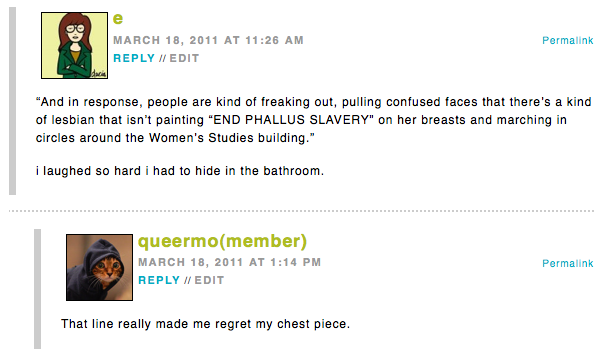 On What’s In a Word? Gay Rights in Canada, Apparently:

The They Celebrate Boxing Day Too Award to Steph and Jules: 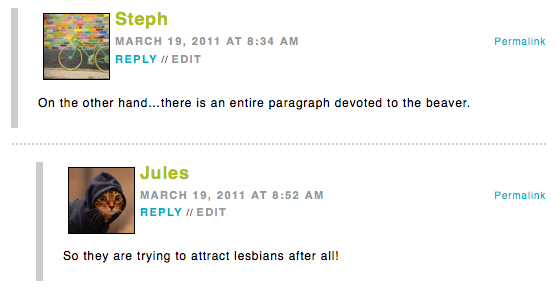 This Award is for Emily to somegirl23: “My girl and I dressed up for the HP premiere, so before the waiting in line, we went to her house and had geeky sex in our costumes.”

On Does the iPad 2 Matter? Yes, No and Kind of:

The Magpie Award to e: “i just want one. so i can watch movies in bed, i know, i’m a lazy jerk. but shiny!”

The Award for Excellence in Destruction to Brianna: “I find it gratifying to go on FreeRepublic or the Focus on the Family website and pretend I am destroying everything.”

On Open Thread: Does Anyone Talk on the Phone Anymore?:

The Phones Are Dangerous Award to Tick: “I seem to be incapable of keeping my phone near me. I can’t count how many times I’ve run into tables/chairs/people/walls while running to answer it. Every time the phone rings, I get a new bruise. (So please don’t call me.)”

The Everybody Loves Pizza Award to cynthia: “i ordered a pizza just now & ended the call with “k, love you.” (????) i immediately thought of this article though.”

The There’s An App For That Award to Missy: 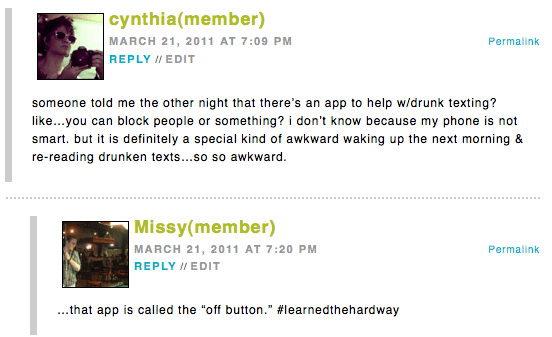 The Nonsensical Award to Dina: “One Easter my other half got a text that read, in its entirety, “dont eat my egg jan”
It’s become a family joke ever since.”

On What Do I Pack for Dinah Shore? Pool Party Packing 101:

The Moonshine Mum Award to Vending Machine: “My mother refuses to go anywhere w/o a mason jar of vodka. I think this is good policy for anyone/everyone. And if you forgot the tonic/lemon it’s nbd.
I think this is one of those situations where it really pays to listen to our elders.”

The Done & Done Award to Petra and theflyingdutchwoman: 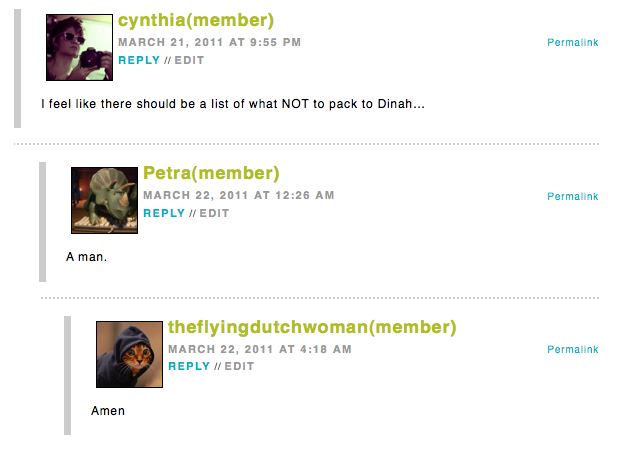 On Gays No Longer Curale via iPhone:

The You Get an A in Multivariate Statistical Comedy Award to terracottatoes: “Who googles “iPhone”?
And this is only tangentially related, but the search string “iPhone” contains four out of five letters that are in the word “penis.” I am just saying 80% is a statistically significant number that clearly has nothing to do with anything, obviously.”