It’s been an interesting week for stories about people who have problems with gay people. Today we’ve got a Florida Lt. Governor who “basically gave a master class in “how not to respond to a sex scandal,” a straight Australian Olympian couple calling “reverse discrimination” on the games’ housing policy, a Kentucky lesbian couple kicked out of a park during a photoshoot, a Mississippi lesbian couple denied the right to marry at their favorite Museum and a Texas lesbian teacher settling out of court with the school who accused her of flirting with female students. 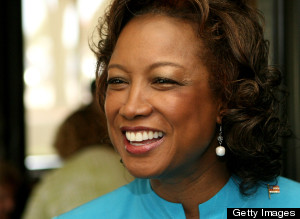 One of the most popular LGBT stories the past 24 hours has been the story of Florida Lt. Governor Jennifer Carroll, accused of engaging in a really super-special friendship with her “female travel aide,” Beatriz Ramos. Carroll’s former administrative assistant, Carletha Cole, claims that she walked in on a sexual encounter between Carroll and Ramos. Cole is being prosecuted for allegedly recording conversations in Caroll’s office and sharing them with the press after being fired, and the story about Carroll and Ramos came out in testimony from the lawsuit.

Carroll’s response to the scandal has turned out to be more scandalous than the scandal itself — basically, in addition to pointing out that Cole is single and she’s been married for 29 years, Carroll argued that “people who look like [her]” aren’t gay:

“The problem is that when you have these accusations come out, it’s not just one person you’re attacking. It’s an entire family. My husband doesn’t want to hear that. He knows the type of woman I am. I mean, my kids know the type of woman I am… Usually black woman that look like me don’t engage in relationships like that.”

In other words, feminine-presenting black women aren’t lesbians, according to Carroll, which suggests Carroll may live underneath a rock or in a small dark cave somewhere or perhaps has internalized homophobia and definitely hasn’t seen our 100 Hot Sexy Femmy Lesbians Gallery. Her argument is also incredibly old school, harking back to the early 20th century when women who didn’t look like “men trapped in women’s bodies” (as sexologists described “inverts,” or female homosexuals) could pursue “romantic friendships” without ever considering themselves “in relationships like that.” It’s an all-too-frequent refrain, even to this day.

Carroll is a pro-life Conservative Republican. The Miami New Times reports, appropriately, that “black lesbians are so pissed at Jennifer Carroll right now.”

Australian Olympian shooter Russell Mark is so pissed at the London 2012 Games for not permitting him to room with his wife, Lauryn, also a shooter, in the Olympic Village.

His bratty, entitled and obnoxious argument against the policy? It’s discriminatory and not fair… because all the gay couples are allowed to stay together! You know, all those gay couples, running around at The Olympics being gay, getting special treatment. Yup. Read it and weep softly for the future of the human race:

“The stupid part of this, which I have argued to them, is that there are tons of gay couples on the Olympic team who will be rooming together so we are being discriminated against because we are heterosexual.”Every couple, whether they are married or de facto should have the AOC trying to bend over backwards to accommodate their needs.

“They are p***** with my stance on sleeping tablets and what pissed them more than anything else is the photo shoot.

“It’s just too hard for them. What I am asking them isn’t too hard but its obvious the AOC have a problem with it.”

Right — except gay couples can’t room with their wives or husbands BECAUSE THEY CAN’T GET MARRIED, asshole. Regardless, the occasional blessing of same-sex housing is one of homosexuality’s few advantages, and furthermore, his assertion that he’s being denied appropriate housing because Lauryn recently did a racy photoshoot for ZOO Magazine doesn’t really hold water because there are like 50 naked Olympians in ESPN Magazine this month.

7News Australia has this report, in which Russell Mark complains, “this is probably the first time in my life that I’ve felt disadvantaged because I wasn’t gay.” 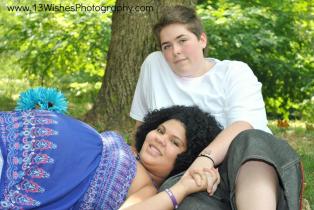 Cheri Chenault and Destiny Keith are expecting a baby this September and were celebrating with a maternity shoot at the E.C. Million Memorial Park in Richmond, Kentucky when they were kicked out by the park’s gatekeeper. Before being asked to leave, their photographer, Jessica Miller-Poole, had asked the couple to do a quick kiss for the camera, but she recalls that “they were a little reluctant, and they kissed so quickly that I wasn’t even able to take a picture of it.”

After being asked to leave, Miller-Poole’s husband talked to the gatekeeper: “He talked to the man and said that if it was because they were two women, that he wanted to know. The man said, ‘those type of people were not welcomed there.’ My husband ended up getting very angry and had to walk away.”

Miller-Poole said she often shoots in that park and was trying to figure out if she was banned from the park for life or if she was only banned with a same-sex couple in tow. The gatekeeper told her that if she returns with “those type of people” that she would be “removed from the park.”

Unfortunately, discrimination against LGBTQ people in Kentucky is, in fact, totally legal! Chenault says the incident left her and her girlfriend in tears: “It took all I had to keep my cool because I just thought it was messed up that he could literally kick us out of the park.”

A Fairness Rally has been planned for Wednesday to protest the Chenault & Keith’s treatment. 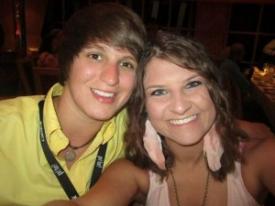 Ceara Sturgis, who you may remember from that time she wore a tuxedo for her school photo and was therefore removed from the yearbook, is working with the Southern Poverty Law Center to secure The Mississippi Agriculture & Forestry Museum as the site for her upcoming marriage to her girlfriend Emily Key.

The Museum refused to accept the couple’s booking because of their sexual orientation. The state-owned museum’s director said they have a policy banning same-sex couples from holding any kind of ceremony in the building. He claims that this policy is entirely legal — in 2009, the State Attorney General gave the museum “permission to limit its business to events deemed ‘legal’ by law.”

Ceara’s mom, Veronica Rodriguez, told the press, “As a mother, I have dreamed of giving my daughter the wedding that she desires, and I want her to be able to get married in her hometown in front of our family and friends. We are not asking Mississippi to recognize Ceara and Emily’s relationship, although it should. We are just asking that they have the opportunity to hold a ceremony in a public place — the same as other couples.”

One could argue that the Museum is not the only building in Mississippi in which to hold a wedding, and that perhaps considering their explicitly anti-gay policy, this isn’t an institution we should be begging to take our money. But, as The Southern Poverty Law Center points out in their letter to the Museum, the “policy is premised on a misguided and erroneous interpretation of Mississippi state law and, further, violates the United States Constitution.” The SPLC also asserts that they will “challenge the Museum’s policy in federal court if the Museum does not rescind its policy against same-sex commitment and marriage ceremonies and honor our clients’ request.”

And finally, a small success story. 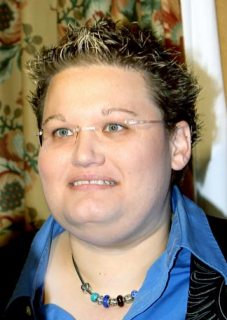 Jackie Gill joined the faculty of Tarrant County College in Hurst, Texas, in 2009 as a temporary English professor, and hoped to move up to a full-time position eventually — but when there were openings in her department, Gill was repeatedly passed over. This made a lot more sense to Gill when she learned that English Department Chair Eric Devlin is super anti-gay.

Gill reported that he subjected her to “a lengthy diatribe about “homosexuals” including a special note on how ‘Texas and Tarrant County College do not like homosexuals'” and, furthermore, accused her of flirting with her female students, despite the fact that Gill always taught with another instructor in the room.

In September 2011, Lambda Legal filed a federal discrimination lawsuit on her behalf, and today it was announced that they came to an out-of-court settlement. The school, who did not have to make any admission of liability, will pay her more than $160,000 and provide her with a positive letter of recommendation. TCC also went a step further by adding a policy prohibiting employment discrimination based on sexual orientation or gender identity. Success!