“I love basketball, you know. I just need it,” says twenty-year-old Lay’lan, the star of the women’s basketball team at the American University of Iraq Sulaimani. The story of Lay’lan and her team is told in the first installment of the Rise Above Documentary series, by Nike’s Jordan brand. Though the documentary is short, it’s more than long enough to witness the camaraderie between the teammates and the passion they have for the game. A few years ago, Lay’lan didn’t even know how to play basketball, and now she says she can’t live without it. As they take a team picture, the young women stand together, some of them wearing hijab, others with their hair held back in ponytails. It does not seem to matter that they may be divided by differences in faith. In order for them to thrive, it is necessary that they support and help one another. As the documentary clearly shows, these young women don’t receive much support or approval from the society in which they live.

But though many in their immediate community may not be cheering enthusiastically from the sidelines, the team has received a fair amount of publicity in the past few years. The Nike Jordan documentary is not the first about this Iraqi women’s basketball team. Salaam Dunk, which also tells their story, was produced by Sleedwell Media, and opened to international audiences in 2011. It was the winner of the Chicago International Film Festival’s Gold Plaque, and was shown in London, New York, and Los Angeles, receiving rave reviews from publications including the Huffington Post, Variety, and LA Weekly. 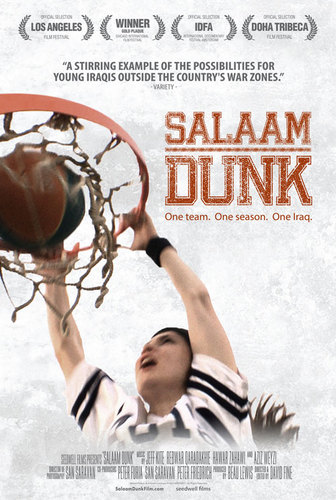 The Nike Jordan documentary is but a snippet of a story compared to the feature-length film about Lay’lan and her team told in Salaam Dunk, and though I am happy that a story about a group of women overcoming obstacles to play the sport they love is being re-told, I can’t help but feel that Nike is just riding the coattails of Salaam Dunk. Nike, after all, is not exactly the Mother Teresa of American corporations. In the 90s, the company was infamous for its sweatshops, and as late as 2000, it withdrew funding from athletics programs at American universities because of students’ anti-sweatshop campaigns. Recently, Nike has undergone a human rights makeover. Apparently its sweatshop look is so-last-decade, and with its Girl Effect campaign and the first episode in the Rise Above series, Nike is dressed in girl power’s finest.

I do not know if Lay’lan and her team-mates wear the new Jordan Super Fly, and I don’t really care. I don’t think it matters. Their story goes far beyond the shoes and the marketing campaign of a $19. 16 billion dollar corporation. It speaks to the hard work and perseverance that is needed to overcome the obstacles facing women in Iraq and throughout the Middle East. As Lay’lan puts it, a women’s basketball team in Iraq is “a huge deal.” Many men interviewed in the Jordan documentary were less than pleased with the idea of a women’s basketball team. Reactions ranged from “it’s okay but just do it in private” to outright disapproval of women’s athletics.

Back in the post-World War II period, the Iraqi Ba’ath party, which came to power in 1963, was praised for its treatment of women. Iraqi women’s rights lessened under Saddam Hussein following the eight-year Iran-Iraq war when Hussein’s regime cozied up to traditional interpretations of Islam. Still, as explained in the TransWorld’s video on Iraqi women’s athletics, under Saddam Hussein women were granted rights not afforded to their sisters in Saudi Arabia and Iran. Today, women continue to face many difficulties post-U.S occupation. According to Amnesty International’s 2011 Report on Iraq, women’s rights are inadequately protected under Iraqi law. They still face threats for not adhering to strict dress codes and are often subject to forced and early marriages. Queer Iraqis are even worse off. Recent reports suggest that the country’s gay and lesbian population is being targeted by death squads. The heterosexual family model, with the husband as head of the household and the wife as happy homemaker (and not happy basketball player), holds much power in Iraq.

The TransWorld’s report discusses how athletics in Iraq have been affected by the American occupation. It explores the unique difficulties faced by female, male, and disabled athletes in Iraq as well as the challenges Iraqis must overcome when training for the London 2012 Olympics.

A female sports team may be out of the ordinary in Iraq, but at least it’s not banned as it is in Saudi Arabia where the government has restricted spending to male-only sports related infrastructure, and Saudi women are limited to fitness gyms with high membership fees most cannot afford. As a result, obesity rates among women are soaring as are cardiovascular disease and diabetes. Up until this year, Saudi Arabia had never a sent female athlete to the Olympics; but it was recently announced that two female Saudi athletes will be competing in the London 2012 games. This is only one less female Olympian than Iraq will be sending to London.

Although the Saudi kingdom’s unprecedented decision does not lift the ban on women participating in sports within the country, Saudi Arabia’s decision is part of a trend in the Middle East: increasingly, women are gaining more freedom to play sports. A decade ago there were no women’s soccer teams in the West Bank, but now the area boasts no less than 16 female outdoor teams and 10 female indoor ones. In total there are nine Middle Eastern countries, including the UAE, Qatar, and Iran, with women’s football (or soccer) leagues, and martial arts, swimming, and track and field are also popular among women. There is even a designer sports hijab that may soon become sanctioned by FIFA. The past few years have definitely shown an increase in interest in designer sports attire for Muslim women. 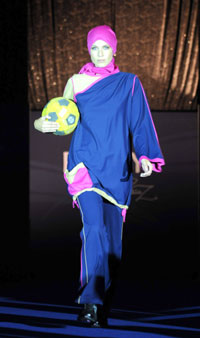 Anyone who has gone for a run after a long and stressful day recognises the value of exercise. As we all know, exercise makes you happy. And when you are happy you have more energy to remain strong in the face of strict dress codes, forced marriages, and death squads (if you happen to be queer). As Olympian Silken Laumann puts it, “women and girls who play sport build self esteem, the very thing that will have them stand up for their rights…and push for more freedom for their own children.”

But sports are not only about empowering women to change their surroundings. It’s ridiculous to assume that just because women are happier, healthier, and have more self-esteem they can change long-standing patriarchal cultural traditions. After all, patriarchy isn’t caused by a lack of self-esteem in women. Rather, low self esteem is a natural outcome of discrimination. Sports aren’t just about empowering women to change their surroundings. They’re also about changing the ways in which women are viewed in their surroundings. When a society becomes accustomed to seeing strong, powerful women on a basketball court or a soccer field, it takes a small step towards the end goal of fully accepting women as leaders, women in positions of power, women in control of their own mobility, their own sexuality, and their own reproductive rights. This is an end goal that has yet to be achieved in North America. Although this article has been about women in the Middle East, it is important to note that when it comes to women’s rights, Canada and the U.S have in no way figured it all out. 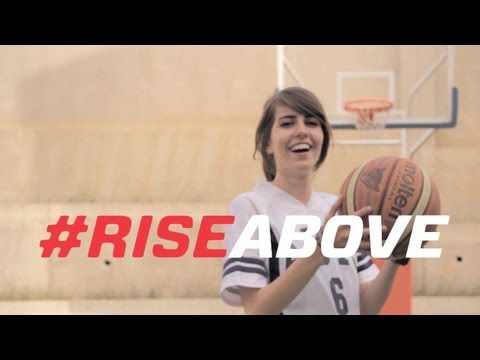 This is why the story of Lay’lan and her teammates is so inspirational — it’s able to cross cultural boundaries to speak to anyone who has dealt with injustice, with discrimination,  and with barriers. It is for anyone who has been told not to do something and then gone ahead and just done it anyway. When Lay’lan tells the camera that as a team “they all have dreams to improve themselves and be even better,” she doesn’t pause to dwell on the obstacles and cultural barriers in their way. She has a game to play, after all.

Jordan’s Rise Above Documentary about women’s basketball in Iraq