Election day was so chock-full of win this year that it was actually hard to keep track of everything good that happened  – by the end, my brain felt like an Obama-Baldwin-Warren smoothie with rainbow sprinkles from four different states and a side of medical marijuana. But this just means the long, slow slog of bureaucracy we all hate so much suddenly works in our favor! Because now we can celebrate all over again each time we enact one of the new awesome decisions that America made. As with most things that should be savored fully, we’re starting in the top left corner.

On December 6th, one minute after midnight, Washington State enacted the newly passed Referendum 74, and officials began issuing marriage licenses to same-sex couples. They’ve barely stopped since  – over 800 licenses were given out in the first 24 hours. The count is rising steadily, and likely won’t stop, given that there are nearly 10,000 domestic partnerships registered with the state, and a provision in the law that automatically turns almost all domestic partnerships into marriages starting in June 2014 (senior citizens can opt out of the switch, for social security reasons). 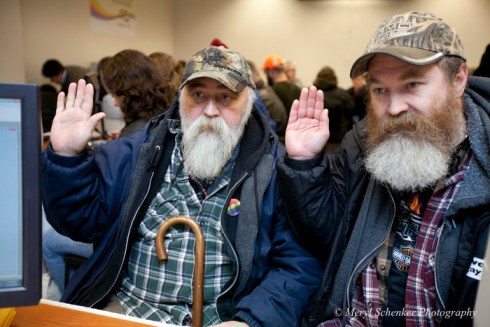 Larry Duncan & Randy Shepherd. How could anyone vote against this? {photo by Meryl Schenker}

In the fight for marriage equality, Washington has been an interesting bout. In 2007, the state passed legislation that afforded same-sex couples domestic partnership status and eleven corresponding rights, including hospital visitation and autopsy authorization.  This list was greatly expanded in 2008, and in 2009 the state legislature passed an “everything but marriage” bill, a law package that gave domestic partners all the same rights as married couples (opponents of the bill attempted to overturn it via referendum, but failed). So when the bill legalizing same-sex marriage was introduced this January, its only goal was to change the names of these partnerships. This is different than the situations in most other states, including Maine and Maryland, where being married is still legally better than being domestically partnered  – it means that the people of Washington voted in support of a measure that specifically calls same-sex couples the same thing as opposite-sex couples. It’s equality for equality’s sake, a pure and straightforward form of acceptance, an incredibly refreshing statement in a conversation often muddied by legal jargon and linguistic acrobatics. It also means that (on this one issue, at least), there’s nothing left to fight about. Washington Governor Chris Gregoire, a longtime supporter of same-sex marriage, describes it this way: “for many years now, we’ve said ‘one more step, one more step.’ This is our last step.” 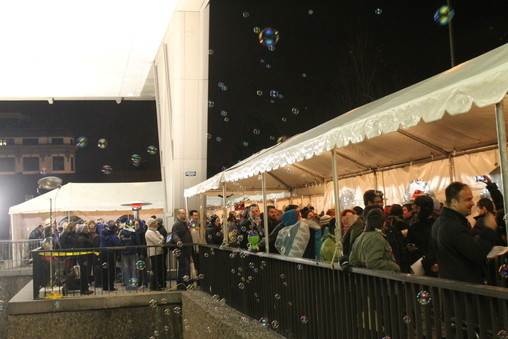 This sense of a battle thoroughly won added to the atmosphere, which everyone described as jovial. In and around the line in King County, the state’s largest, bystanders blew bubbles and gave out rainbow pins with Washington’s face on them. A lesbian couple who didn’t want a license came anyway and poured everyone champagne. Streetside choirs sang a capella spirituals; volunteers distributed roses and, appropriately, fruit. County executive Dow Constantine, who explained his decision to open the courthouse early because “people who have been waiting all these years to have their rights recognized should not have to wait one minute longer,” hung around until 4 AM congratulating everyone. When cars honked, everyone whooped back.

Some people got to cut the line. So as not to privilege one-time overachievers above lifelong actual-achievers, some county officials chose to set aside their first marriage certificates for particularly amazing couples. The first people to get licenses in King County were Pete-E Petersen, who is 85, and Jane Abbot Lightly, who is 77. They met on a blind date in Sacramento in 1977 and hit it off immediately; two weeks later they moved in together, and now, after 35 years side by side, they’re going to get married. Petersen feels “so joyous I can’t hardly stand it.” County officials say they chose the pair because they’ve been such visible members of the Seattle gay community, and because of the history they’ve lived through – Petersen was an Air Force captain in the Korean War, and remembers the military’s constant persecution of suspected queer people, which she likens to a “witch hunt.” But I suspect it’s actually because they’re so adorable (I present this video as evidence). 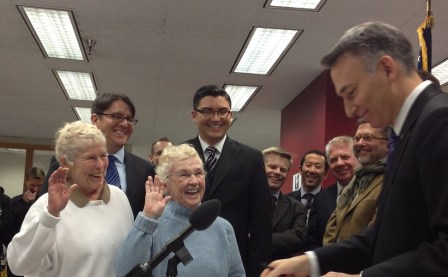 Jane Abbot Lightly and Pete-e Peterson, about to get called on.

Other counties honored veterans, too – Island County’s first license went to Grethe Cammermeyer, a 70-year-old colonel who served with the Washington National Guard, and Diane Divelbess, her partner of 24 years. Before the repeal of Don’t Ask Don’t Tell, Cammermeyer became the highest-ranking out servicemember in history after overturning her own honorable discharge in court. Spokane County gave theirs to Air Force nurse Margaret Witt, who was also honorably discharged (this time under DADT), and her fiancee Laurie Johnson. Witt proposed to Johnson last month onstage at an ACLU dinner, where she received a civil libertarian award. The Clark County auditor’s office gave their first license to someone closer to home  – Paul Harris, who has been the office’s manager of marriage licenses for years. He’ll marry his partner, James Griener, on Wednesday, two months before their 40th anniversary.  Harris is happy: “After issuing thousands of marriage licenses, I can finally get one of my own. It’s a wonderful, warm feeling.”

Any couple who gets a marriage license in Washington has to wait three days before they cash it in, so most of the actual wedding action is set for this Sunday, December 9th. The state is on rainbow alert for that too – Seattle City Hall is opening especially for the occasion, for enough time to marry 142 couples. Several judges have volunteered to perform the ceremonies, and local artists are spiffing up the venue with custom-painted backdrops. Reverend Rob Figley, a non-denominational minister who specializes in weddings and is volunteering to officiate some in Vancouver, summed up the general vibe when he told Oregon Live “it’s a serious event. But, let’s face it, it will be a party.”

Dan Savage has a priority conundrum (he went for the license)

The celebration jumps all the way across to the northeast part of the country on December 29th, when Maine begins to issue licenses, and then heads south on January 1st, when Maryland follows suit. Now that the Supreme Court has announced that they will consider DOMA this year, we can cross our fingers that, sooner than anticipated, we might be able to take the party nationwide.